Chinese smartphone and smart TV manufacturer LeEco expanded into the Indian market at the beginning of the year when it introduced the LeEco Le Max and Le 1s smartphones. The company’s push into the Indian market was part of its big plans to expand its business into new territories, however, according to fresh reports LeEco has now decided to minimize its activities in India in order to cut costs. The company is reportedly exiting offline sales of smartphones, it is cutting 1,000 in-shop temporary jobs while minimizing advertising expenses, and apparently it will also postpone the launch of new smartphone models throughout the next couple of months.

LeEco is a fairly large brand in China and earlier this year the company attempted to expand into new territories including the U.S. and India. Unfortunately, after less than a year on the Indian market, the company is now preparing to take a step back and put its expansion plans on hold. According to LeEco founder and chief executive Jia Yueting, the company pushed its global expansion strategy too aggressively in spite of limited resources and capital, which is why LeEco is now forced to minimize costs and reevaluate its strategy. Furthermore, an unmentioned trade partner of LeEco India cited by the Economic Times added that “LeEco India could have sailed through for some more time, but demonetization hit sales badly”. The Government of India demonetized Rs. 500 and Rs. 1,000 banknotes in November 2016. The same source also pointed out that while other competing brands have been launching “promotional offers like finance schemes, there was nothing from LeEco.”

As far as LeEco’s ongoing strategy is concerned, LeEco India will now exit offline sales of smartphones and will cut 1,000 in-shop temporary jobs. In addition, the LeEco team in India might shrink, and plans for single brand retail have been put into “cold storage”. The company’s “massive advertising budget” has been slashed, and sadly, the launch of new smartphone models will slow down in India throughout the next couple of months, assuming that the market will stabilize by then. Meanwhile, other Chinese smartphone manufacturers including Oppo, Vivo, Lenovo, and Xiaomi are “still going strong” in India, partly due to “aggressive pricing”. 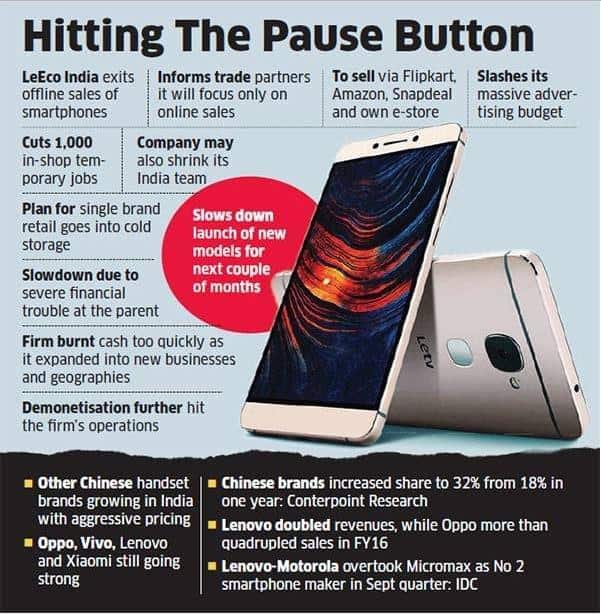