Xiaomi is, first and foremost, a smartphone manufacturer, but this company is so much more than that. This company manufactures all sorts of tech gadgets, while they also develop their Android-powered operating system called MIUI. Xiaomi had introduced all sorts of gadgets this year, ranging from smartphones and fitness bands, all the way to an electric bicycle and laptops. That’s right, back in July, Xiaomi had introduced two Mi Notebook Air laptops, devices which look really nice and are quite powerful. Well, it seems like the company is looking to introduce some additional laptops soon, read on.

A rather interesting image surfaced, and this seems to be Xiaomi’s official teaser for an upcoming event. If you take a look at the provided image, you’ll notice that it teases the company’s new laptop that will offer 4G LTE connectivity. The image shows off one of Xiaomi’s notebooks, and on its display, you can notice the cellular connection and 4G LTE connection. The image claims that the company plans to introduce this new laptop on December 23rd, though do keep in mind that Xiaomi did not share this image through their official Weibo (Chinese social network) page, at least not at the time of writing this article. The event will be held in the Beijing Golden Corner Sheraton Hotel on December 23rd at 2PM (local time), according to the image. Now, the Xiaomi Mi 5C has also been popping up quite frequently lately, and that smartphone could also arrive next to the all-new notebook, but we’ll see.

Now, chances are that this notebook will be identical to one of the two notebooks Xiaomi announced back in July, but it will come with 4G LTE connectivity, in other words, you’ll be able to insert a SIM card in the device and use its cellular capabilities. It is even possible that Xiaomi plans to release 4G LTE variants of both the 12.5-inch and 13.3-inch Mi Notebook Air laptops, who knows. We don’t really have all that much info at the moment, aside from this leaked image, but it’s possible more info will surface soon, and if this leak is accurate, Xiaomi will start teasing the event soon as well. 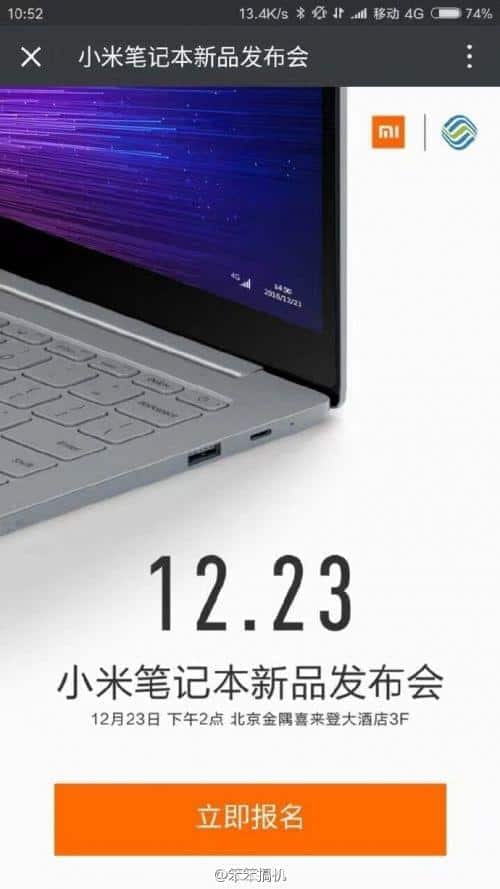