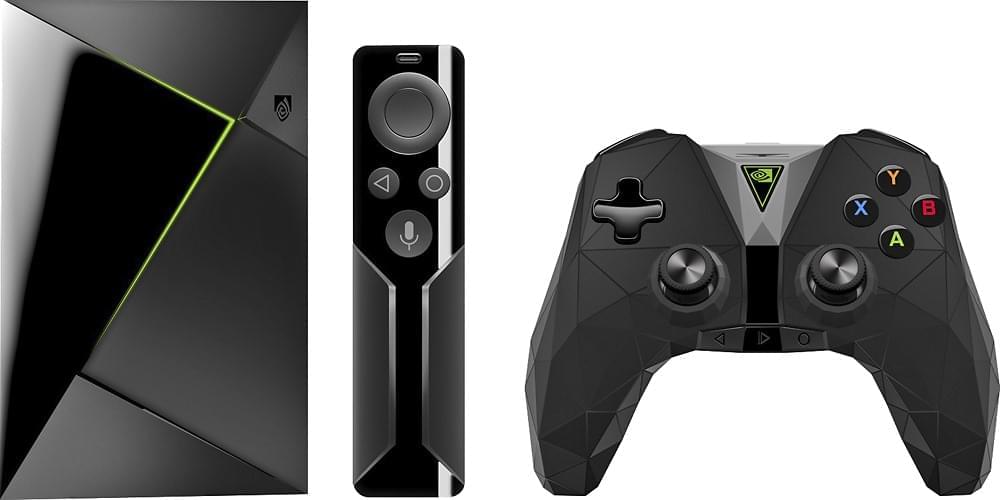 A possible NVIDIA SHIELD Android TV 2nd Gen unit has just leaked in a new image, and although it looks much the same as the currently available unit, it appears to come with a redesigned controller. While there is not much of a difference if any in the design of what could be NVIDIA's 2017 model of the SHIELD and the current model that can be purchased at various retailers, it's possible that NVIDIA could have refined the overall look just a tad. The new NVIDIA SHIELD also looks to come with a new remote, as well as a new NVIDIA SHIELD Controller which based on the image, is so far the only one of the three devices that has a noticeable difference in the looks.

The overall shape of this new controller looks very much the same as the current controller, but it's taken on a very pronounced and visible polygonal design pattern across the surface, which is likely used all the way around the surface of the controller including the sides and back. There are more differences, too. NVIDIA has removed the touchpad that resides on the bottom of the current controller, and the grips are quite a bit more defined in this newer model as they're a bit longer than they are on the old version. While there is no way to know what NVIDIA's reasons were for these changes until they officially announce a new SHIELD and the controller to go with it, it seems likely that this could have been a design decision made to give the controller a little more of a comfortable feel in the hand.

The thumb sticks have also been updated and look a lot more like those found on the controller for the Xbox One S, with a smooth surface on the top and a rigid, texturized feel around the edges. Also gone are the volume buttons, and NVIDIA looks to have moved the navigation buttons from the top where the power button is, to the bottom where the touch pad used to be. Again, this seems to be a decision likely made for ease of use and comfort, as your thumbs are right there and would have an easier time reaching the navigation buttons in this position as opposed to having to stretch all the way to the top. Alongside the leaked image it's rumored that there will be two different sizes of this new SHIELD, which could actually be two different sizes, but may be more likely that the size is referring to the storage. NVIDIA is suggested to be unveiling the new SHIELD at the upcoming CES trade show.