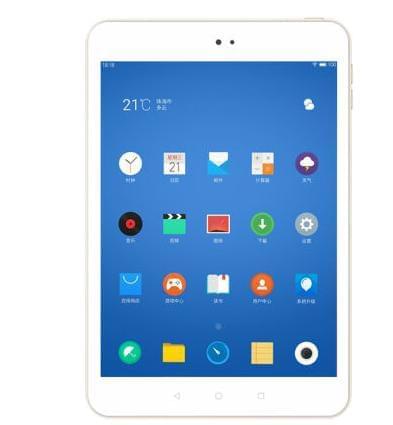 Meizu, JingDong Mall (JD.com), Foxconn, Harman and LeEco partnered up in order to create the very first Flyme OS-powered tablet, the JDTab. This tablet was created especially for JingDong Mall (JD.com), which is, for those of you who don't know, one of the largest retailers in China, and the world actually. This device is powered by Meizu's Flyme OS, but there's much more this tablet has to offer, read on.

In addition to the fact this tablet ships with Flyme OS pre-installed on top of Android, the JDTab also comes with Harman Kardon speakers, and LeEco video / music service is pre-installed as well. A one year LeEco VIP service subscription is also a part of the JDTab package. In addition to that, you'll also get 1000 free books to read for 3 months as part of the JD reading service. This tablet is made out of metal, and it features three capacitive buttons below its display, back, home and overview (multitasking) keys, respectively. The JDTab sports a 7.85-inch 2048 x 1536 display, along with 4GB of RAM and 64GB of internal storage. The device is fueled by a quad-core SoC clocked at 2GHz, but the listing doesn't really reveal which SoC we're looking at here, it's not one of Qualcomm's chips though. The 6,200mAh battery is also a part of this offering, and this battery is not removable, in case you were wondering. The Flyme OS that is pre-installed here is actually a special edition of this Android skin which is made for tablets, some of you might remember that Meizu introduced this special variant of Flyme OS earlier this year. On the back of the JDTab, you'll find an 8-megapixel shooter, while a 5-megapixel camera is placed on the front side of the device.

The JDTab is not exactly flashy at all, this tablet looks like a number of other tablets out there, and it comes in gold and silver color variants. The 3.5mm headphone jack is available on top of the device, and the aforementioned Harman Kardon speakers are placed on the bottom of this tablet, while the Type-C port is located in between them. The JDTab can be pre-ordered on JingDong Mall for 1,499 Yuan ($215) starting today, if you live in China, of course.