Companies’ culture often reflects in their day to day operations and policies, and Google is a prime example of this phenomenon in action. Every building at each of Alphabet’s global operations centers is powered, in at least some part, by renewable energy. The proliferation of renewable energy happens to be one of Google’s goals. Right now, the total amount of Google’s energy needs worldwide being met by renewable energy sits right around 2.6 gigawatts, beating out big names like Procter & Gamble, and even the United States Department of Defense. According to an announcement put out on December 6th, Google is planning on transitioning to full renewable energy before the end of 2017, and they will be generating none of that themselves, instead purchasing it from renewable projects in order to fund creation of more renewable energy, keeping the cycle going.

In their post about the matter, Google pointed out that now is a very opportune time to make this shift; Google’s energy needs are growing by the day, while the price of renewable energy just keeps on shrinking. The price of solar energy, for example, is now 80% lower than it was six years ago, while wind energy has come down some 60% in price in the same period. Meanwhile, prices for municipal energy companies and other such entities continue to fluctuate wildly. With electricity being a major part of Google’s daily operations budget, having a stable, fairly low cost promises to be a massive help in keeping on top of the books and keeping costs down.

In order to keep renewable energy flowing at all hours of every day and to ensure that local elements producing the energy get as much of Google’s money as they can justify giving them, the company is focusing their purchasing in the areas where their operations are the biggest, and diversifying purchases across many different kinds of renewable energy. When the wind isn’t blowing, there may be sunlight, and at night, a nearby stream still flows more than fiercely enough to power hydroelectric operations, for example. This diversified, locally-focused approach should be enough to bring Google’s energy purchases up to par with their consumption by the end of 2017, while also helping the entire renewable energy market to grow and supporting the local economies of the places that host the projects they buy energy from. 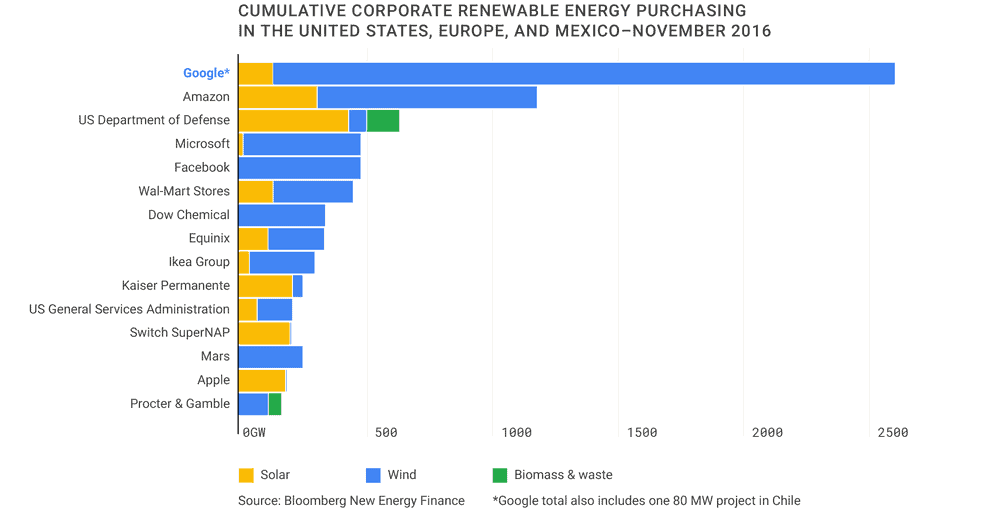