There was once a time when the Play Store was known as the Android Market, and it was good for little more than just apps and some games. Since then, of course, the Play Store has ballooned into a one-stop shop for all Android users looking for apps, games, books, movies – now in 4K – and TV Shows. Finding exactly what you want in amongst all of this, however, has been something of a challenge for some time now. Google has been working on making this better for a while, but as the search bar continues to be something of a disappointment, any small change has the possibility of improving things for all Android uses massively.

As such, the spotted change by a Pixel user to change how apps and games are displayed when browsing the Play Store could make things a lot easier for Android users on the whole. A Pixel user has spotted the Play Store clearly separate both apps and games into separate categories on the front page of the store. While the separation appears to be live for some users, it might take some time for it to appear for others out there. This sort of change is often made server-side, which means that the change could appear on your device at any time, and does not require an update to the Play Store app itself. Regardless, this is the sort of change that should give users a lot to be happy about, as browsing for software in the Play Store has often been something of a poor experience, while search rarely helps much, either.

Separating apps and games on the device side of things will help users find something they want, without having to go through several different subcategories, and it’s likely that this is the sort of change that will help users discover certain titles they might not otherwise when browsing. A similar change in the naming of these categories happened not too long ago with the arrival of the “Entertainment” category, which is still labelled as “Music, Movies, Books” for some users. As such, it could take some time for this split of apps and games to appear for users. 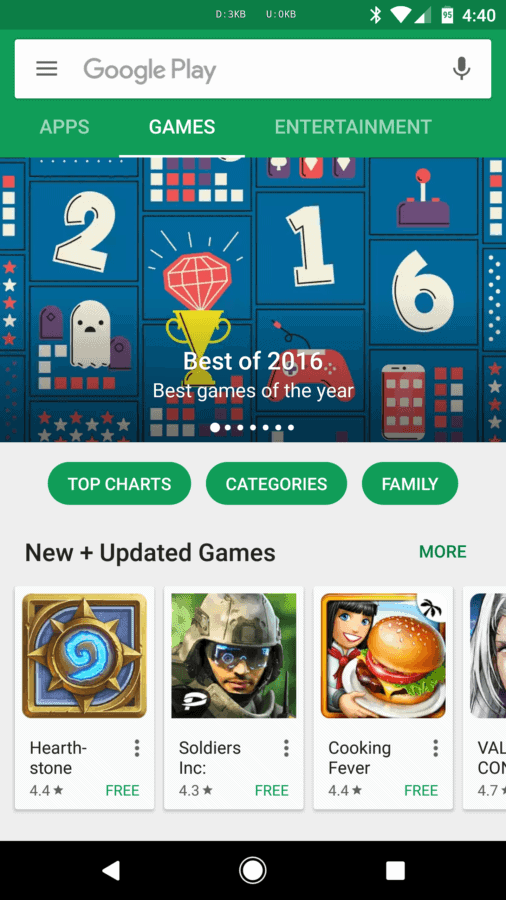