As anyone who has ever participated in a Facebook discussion or seen one already knows, navigating through dozens or more of Facebook comments can be a disorienting experience. At the moment, Facebook shows comments and most popular replies to them below posts, while all other replies are hidden and need to be opened manually, after which they're presented to users in a chronological order. Well, this mechanic could soon change as we've just heard reports of the social media giant testing an alternative solution to browsing comments. More specifically, Facebook recently started experimenting with a feature which presents comments on Facebook posts within standard chat windows. This feature was first noticed on Tuesday, December 6th. Namely, that's when one Russell Smith made a screenshot of the said functionality which you can see below.

The screenshot was initially sent to TechCrunch who proceeded to contact Facebook over the matter. According to a spokesperson from Facebook, a significant amount of users were requesting an easier way to participate in discussions on Facebook without leaving their news feeds and navigating through comments on Facebook posts and clicking on notifications whenever someone mentions them in discussions or replies to their comment. So, as of a few days ago, Facebook started experimenting with this feature which opens a chat window whenever a user is tagged or mentioned in a discussion, or someone replies to them. Naturally, this is a purely optional functionality which can be unfollowed from the drop-down menu of any Facebook post, just like one can turn off notifications on posts.

At the moment, this new way of displaying discussion-related notifications will appear minimized if someone only responds to a thread a user has commented on, while the window will automatically open in case the said response was directed at the user. Given how the feature works through Facebook Messenger, users are also able to participate in discussions on Facebook without ever leaving the company's standalone IM app. Unfortunately, Facebook hasn't clarified on the scope of this test, so there's no way to know whether you're a part of the testing pool or not. However, if this feature proves to be popular among users, it will probably roll out globally in the coming months. 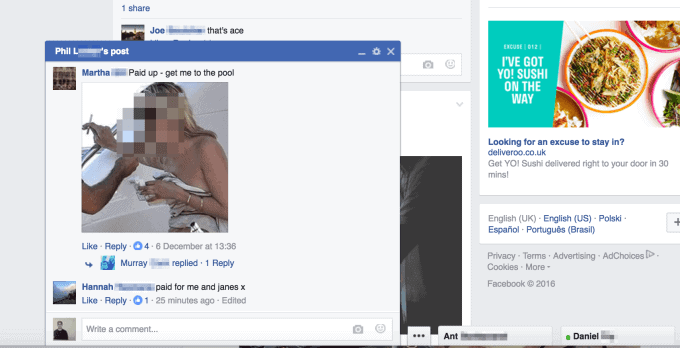