Those using the General Mobile 4G are starting to receive the update to Android 7.1.1 which comes complete with the latest security patch, which is December’s patch of fixes. Google typically begins rolling these monthly updates out in the first week of every month, and since it is December 2nd it likely isn’t too shocking to see the update starting today. That said, there are so far no other reported devices which have received the software update, but it probably won’t be too long before other phones like the Google Pixel and Pixel XL, as well as Google’s lineup of currently supported Nexus devices see the new software come though.

The good news is that Google is also likely to put up the factory images and OTA images for all of their supported devices in the near future as well, and potentially before the OTA actually get sent out, which means those who would rather not wait around will have the ability to flash the new software manually for their correct device. At the moment, though, Google has not published either set of images for download, so it’s still a bit of a waiting game.

The update is about 240.6MB in file size, so there may be a small tweak here and there and perhaps a few new changes to look out for, but according to the details that accompany the update the software contains the December security patch and some bug fixes and improvements. It’s also very possible that those are the only changes included. The update is reportedly hitting General Mobile 4G users in Turkey, so Google’s rollout process for this update could be starting in a smaller amount of regions and a smaller number of device types before getting this sent out to users globally. Alongside the Google Pixel and Pixel XL, users can expect this software to hit last year’s Nexus 5X and Nexus 6P, the Nexus 6, Pixel C, Nexus 9, and the Nexus Player. Rumors have pegged the update as hitting most compatible devices by the middle of next week, more specifically on December 6th, so it shouldn’t be too long before the update as well as the factory and OTA images for manual flashing. 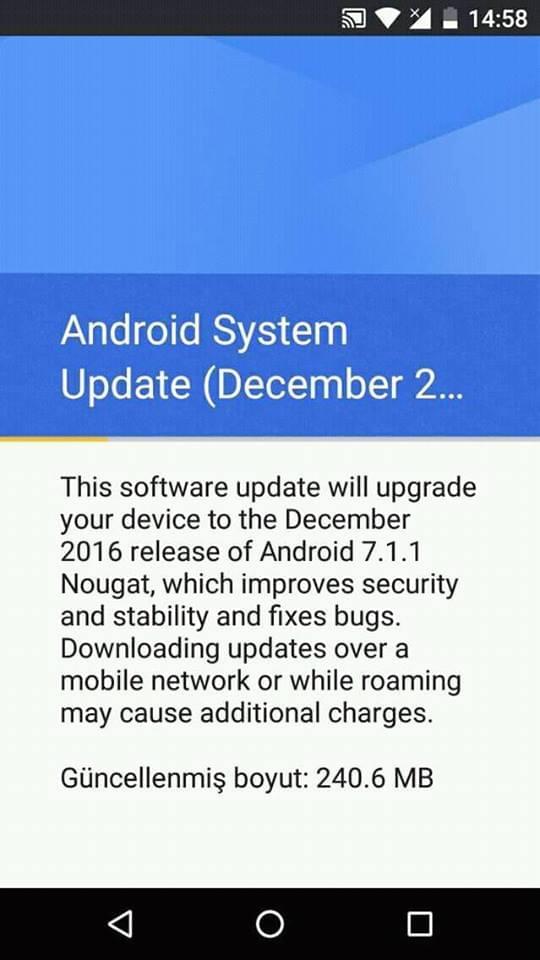