The Lenovo Yoga Book is easily the most exciting Android tablet from the past few years.

Android Tablets, and perhaps tablets in general have seemingly been put on pause, as there’s little going on in the tablet space. Microsoft and their Surface Pro line of devices appear to be going strong, but in the world of Android, the choice has been slim this year. With Google themselves steering clear of releasing a tablet in 2016, it makes you wonder how much value even the creator of Android puts in tablets these days. Thankfully, industry giants such as Lenovo and Samsung have kept the Android tablet market alive with new, and in the case of Lenovo, very different tablets from those we’ve become used to. We expect more from our portable devices than ever, and it’s good to see that the bigger names aren’t giving up on the category altogether. 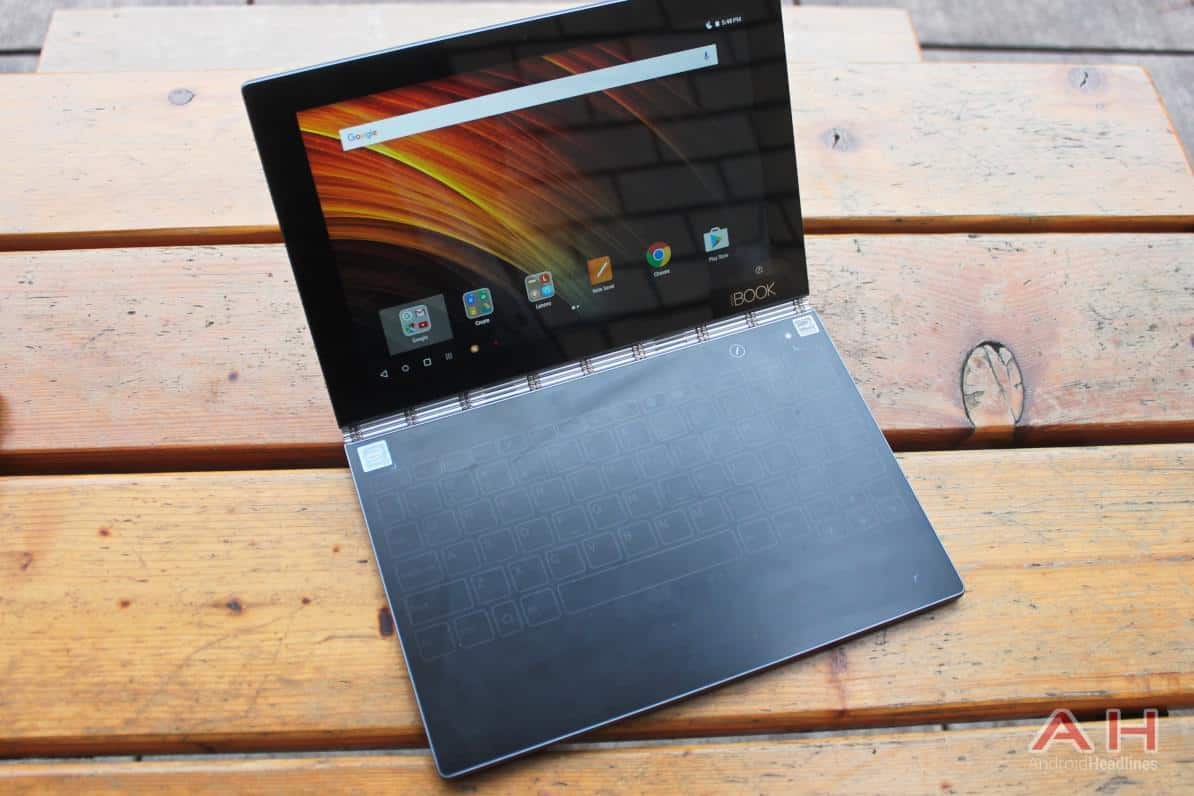 This year, the only person to do something different with the tablet formula was of course, Lenovo. Announced during IFA 2016, the Yoga Book does things differently, thanks to a folding form factor that allows for simple touchscreen operation, as well as keyboard input. The Yoga Book might have been late to the party, but it made up for lost time by offering a great deal. Even the keyboard here is different, with a Halo keyboard that’s a touch affair on the second half of the clamshell design. Speaking of design, the Yoga Book looks like something straight out of the future, the hinge – which Lenovo says is inspired by elegant watch bands – is something you won’t see on most laptops, let alone tablets and if there’s anything that looks as thin and sleek as this right now, we haven’t seen it yet. Thanks to the fact that the tablet splits its internals between the two parts of its design, each of them is super-thin and looks great on any desktop or table top.

With an Intel Atom CPU and 4GB of RAM, the Yoga Book might not stand out on the inside too much, but being able to use the bottom half of it to draw, sketch and outline things, it’s clear that the Yoga Book is designed for more than just the mundane tasks that other tablets have been. With the Yoga Book, a user can place a piece of paper on the second screen and have the handwritten notes “traced” digitally into the tablet part of the affair, and while this won’t be for everyone, it’s something no other Android tablet can manage. It’s portable as well, coming in at 690g for a device that bridges the gap between laptop and tablet, all the while offering something totally unique. The 1920 x 1200 10.1-inch display could be higher-resolution, but it’s good-looking and displays whatever you want without any hassle.

We reviewed the Yoga Book earlier this year, and while it’s not a perfect device, the Lenovo Yoga Book is easily the most exciting Android tablet from the past few years. It offers a complete experience on the touchscreen tablet side of things, while also being a graphics tablet, a laptop, a notebook or whatever else you can think of. What makes the Yoga Book so special is not the excellent fit and finish, or even the speedy internals, but what it allows you to do while on the move. Lenovo use this same hardware for their Windows 10 version, and have successfully built upon on their Yoga brand in the Android world – which was featured in these awards last year – to create something that breaths new life into a category in dire need of something fresh.

It’s been a long, long time since we saw a new Samsung tablet launch. During 2016 we didn’t even get a new Galaxy Tab S2, and instead have to settle for this, the Galaxy A 10.1, in a 2015 refresh that gives it the S Pen – now missing from the ill-fated Galaxy Note 7 – as well as some improvements under-the-hood. There’s a lot of reasons why Samsung’s Android tablets are still popular, with their software tweaks and extra apps being high up on the list. Stock Android has never been great on tablets, and Samsung has been offering up extra features such as multi-window for years now, while everyone else has been playing catch-up. The Galaxy Tab A 10.1 has a Samsung Exynos 7870 and a 10.1-inch 1920 x 1200 display. Both of which put this in the middle of the pack where tablets are concerned, but where the Galaxy Tab A 2016 makes up ground is in value for money, offering users a solid tablet experience for much less than other options out there. The S Pen is great for taking notes in class, keeping the kids entertained with endless drawing or coloring, and it’s perfect for games, too. Altogether, the Galaxy Tab A 2016 has a lot more to offer than you might originally think.

At $300 with a 9.7-inch display and a 20148 x 1536 resolution, right away the ZenPad 3S 10 sounds like a good deal. Perfectly comparable to the iPad, the few things that let this down is the MediaTek CPU and needless changes that ASUS make to Android – which might even be a plus point for some. Tablets are, for a lot of people, simply a larger display that offers more space for browsing the web, watching movies and TV as well as playing games. For all of that – and a little more – the ZenPad 3S 10 works wonderfully, and it’s great value for money as well, offering users a simple, appealing Android tablet that has all the right boxes ticked, including full access to the Play Store and the rest of Google, a good-looking and sharp display and a fit and finish that is just as good as the rest of the market right now.