The Xiaomi Mi 5c aka Xiaomi Meri seems to be the company’s upcoming smartphone. This device has been leaking out for a long time now, and we’ve seen quite a few leaks in the last couple of weeks. Based on those leaks, the phone will resemble the Xiaomi Mi 5 in terms of the design, at least from the front, though unlike the Xiaomi Mi 5, it will ship with metal on the back, instead of glass.

Information that surfaced the other day claimed that the phone will cost 999 Yuan in China once it launches, and now we have some new info to share with you. Now, first and foremost, it is worth mentioning that rumors are claiming this phone will land next month, in December. We still don’t know when, but previous rumors had claimed it will land on December 30th. In addition to Xiaomi Mi 5c’s launch timeframe, we also stumbled upon some spec info. If the source is to be believed, the Xiaomi Mi 5c will sport a 5.5-inch fullHD (1920 x 1080) display, along with 3GB of RAM and 64GB of native storage. The device will be fueled by Xiaomi’s in-house SoC called ‘Pine Cone’ or ‘Pinecone’, depending on which rumor you opt to believe. This processor will be clocked at 2.2GHz, and Android 6.0 Marshmallow-based MIUI 8 will ship out of the box here. The 12-megapixel camera will be placed on the back of this smartphone, while you’ll be able to find an 8-megapixel snapper on the phone’s front side. For those of you who need NFC functionality, you’ll be glad to know that the NFC chip will be included here as well.

If the rumors are accurate, this will be the first smartphone that will be fueled by Xiaomi’s very own processor, which we know almost nothing about. All we know is that this is supposed to be an octa-core chip, and that it will be clocked at 2.2GHz. The Xiaomi Mi 5c is supposed to be a mid-range smartphone, so we’re guessing this processor will offer mid-range performance, at least that’s our best guess. In any case, stay tuned, more info will surely surface soon. 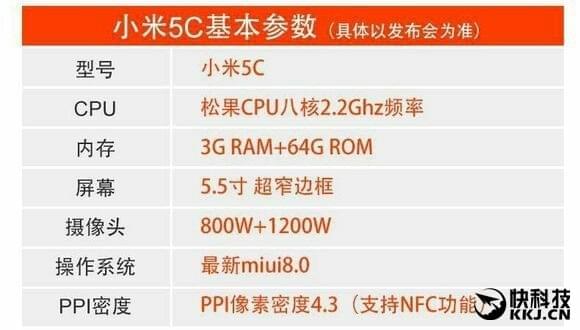