Television commercial measurement business, iSpot.tv, produces a regular monthly look at what carrier is spending the most on television commercials and for October 2016, Verizon Wireless spent the most. In fact, Verizon spent almost one third of all the television advertising dollars of the industry; of an overall estimated $285.6 million spread across 94 spots, running for a total of 42,466 commercials, Verizon Wireless spent an estimated $94 million. It ran 15 adverts a total of 8,140 times and the most prevalent is the "Multiple Fist Pumps" commercial, with Jamie Foxx. This commercial is explaining how Verizon Wireless was found to be the fastest and most reliable carrier for call, texting and data services. For their investment, Verizon gained 2.9 billion television advert impressions.

It should be no surprise that Verizon Wireless has topped the advertising spend charts for October because the business has had something exciting to shout about: the new Google Pixel and Google Pixel XL smartphones, introduced in the month and being advertised as a Verizon exclusive. Verizon has also been feeling the pressure from its competitors especially after it announced a fall in subscribed numbers for Q3 2016, and how some competitors – especially T-Mobile US – have been on the charm offensive trying to persuade Verizon Wireless customers to ditch their current network and join T-Mobile US and their unlimited plan. As to how iSpot calculate these figures, the company tracks many, many television commercial interactions across around one third of the population by studying peoples interactions for video plays, searches, social media activity and online views for YouTube and iSpot.tv videos. 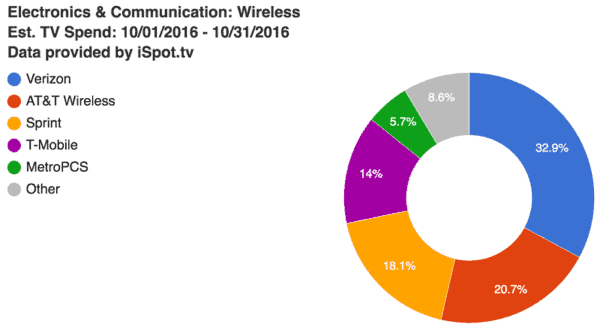