Bubble Shooter 2017 is a game that will remind many of the classic Puzzle Bobble games of old, with colorful graphics and arcade controls, it’s the sort of game that will give players a taste of classic gaming, as well as something that will appeal to a younger and more casual audience looking for something a little less involved to play through. A simple phone game that can be played with one hand thanks to simple controls, Bubble Shooter 2017 features 1,000 different levels for players to sink their teeth into. Along the way, players will collect coins and use them to change the color of the current bubble they’re about to shoot, as well as choose power-up bubbles that knock out anything in their path. So, let’s take a look, shall we?

As with other games, players will need to download Bubble Shooter 2017 from the Play Store in order to get started. 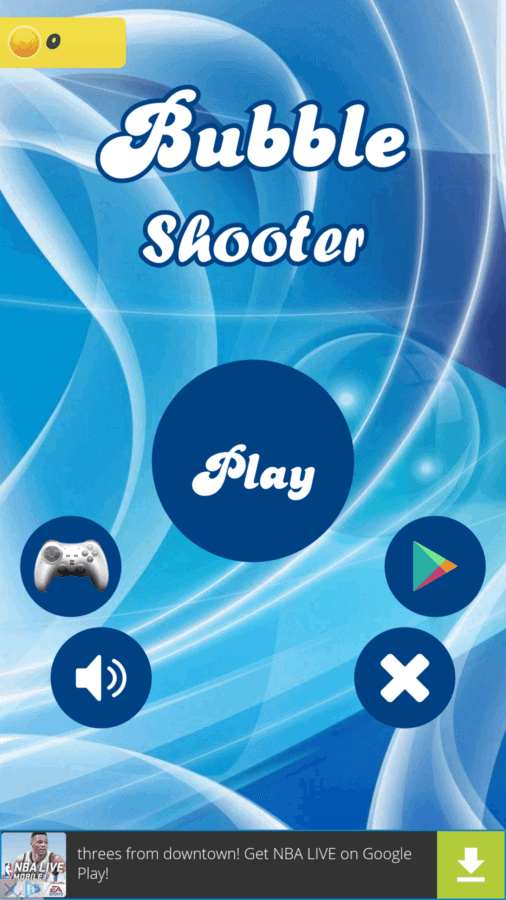 There are few menu entries to speak of here, which is perhaps just as well as there’s not really any need for them, given that the general concept of the game is pretty simple. Players will be able to select which level they want to play. They need to complete them in order to unlock them all, but should they wish to go back and play one they have already done – to get a higher star-score, for instance, they can do. 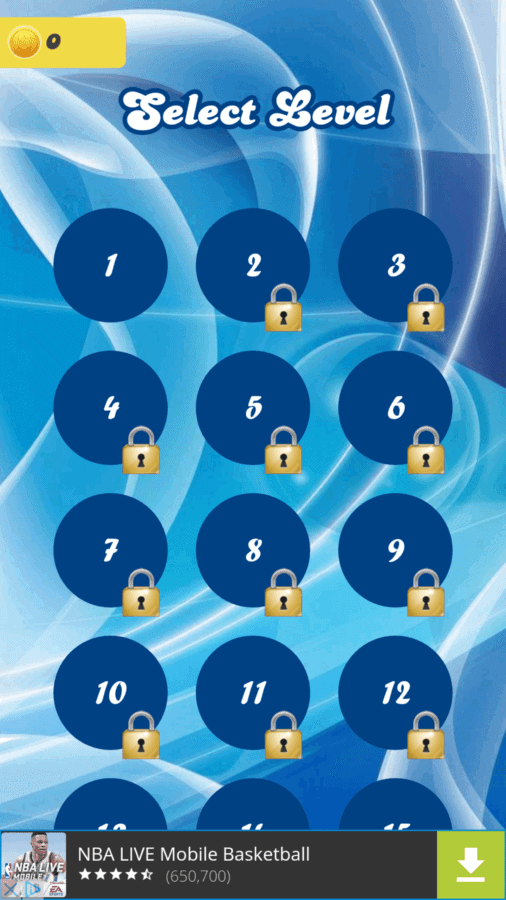 Actually playing the game is super-simple, and despite there not being any sort of introduction as to how the game plays, the controls are simple enough. Players just need to tap on the screen where they want the bubble to be fired. They can see the color of the bubble in the launcher at the bottom of the display, and will need to think about where the most bubbles of that color are on the map. 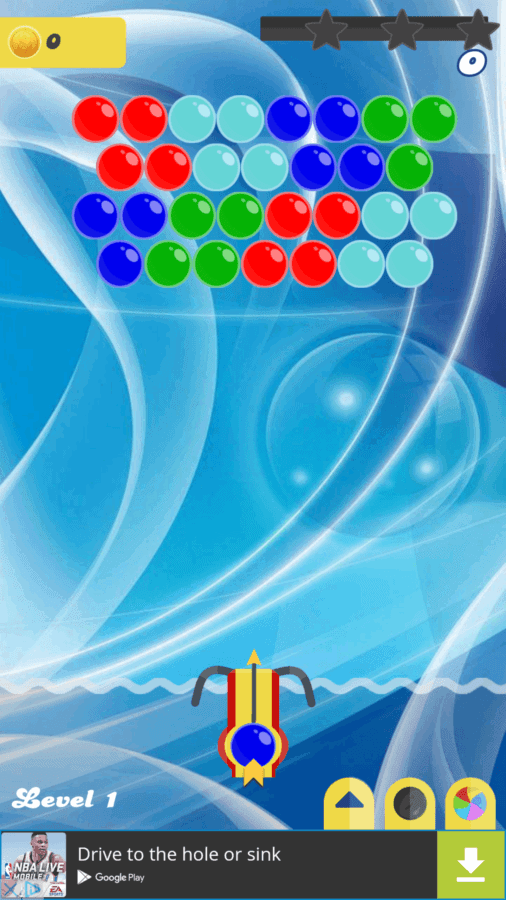 Players need to match three or more bubbles of the same color in order to have them removed from the game area, and while this sounds simple enough, I did find it was a little too easy to end up positioning new groups on their own, which meant that you’d need to use more moves to complete the level in the long run. 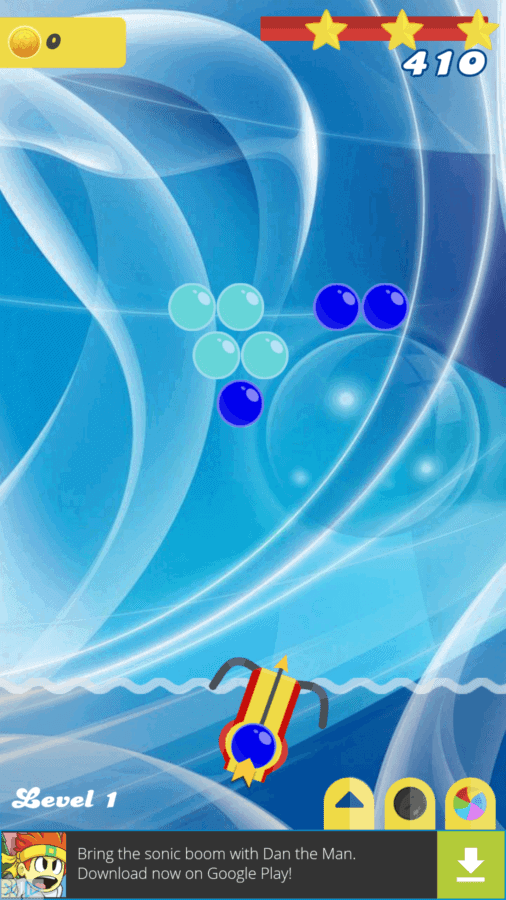 Even so, completing level-to-level isn’t all that difficult, and thanks to the wide variety of different levels on offer – with there being more than 1,00 of them – there are some interesting shapes that appear as you play through all of them. 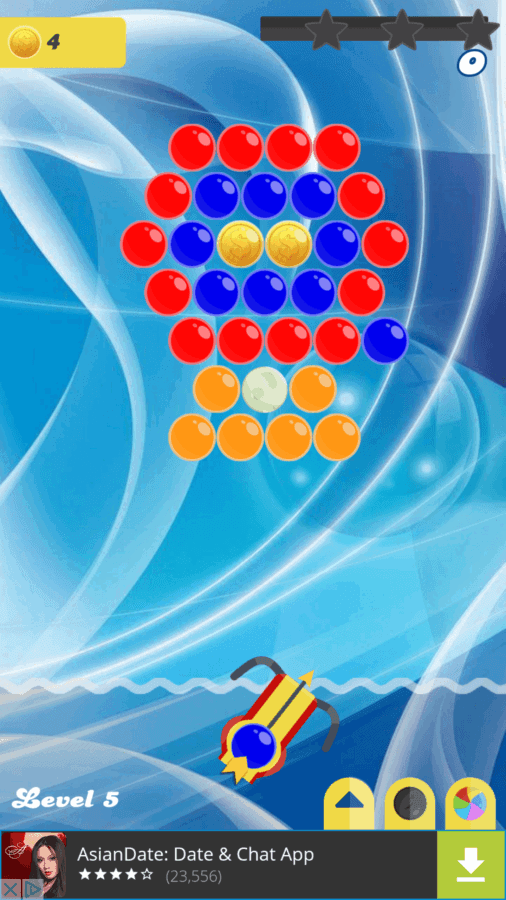 Some of which are fairly easy like the one above, and others which give users more of a hard time asking them to bounce more of the balls off of the walls and such. 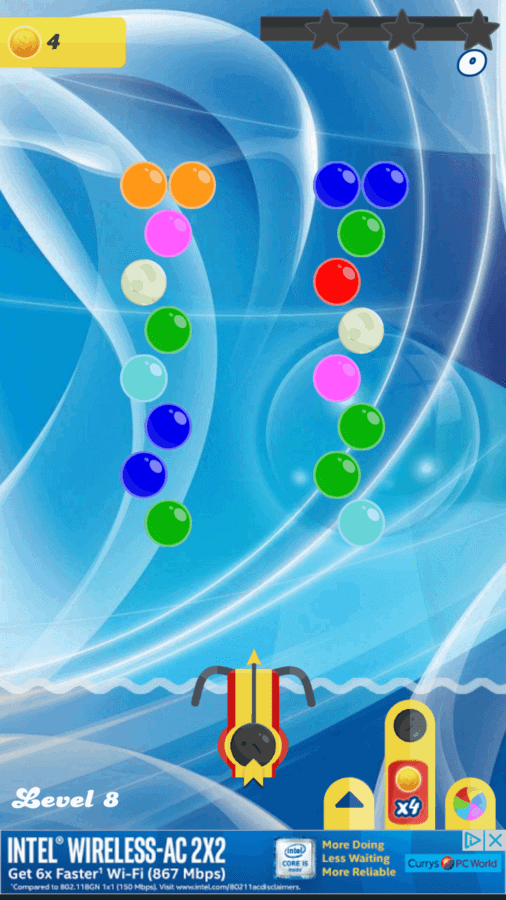 At the end of each level, players are awarded a simple star-rating on how they performed for that level. This is pretty generic and is featured in most games on Android, so there’s not much to write home about here, but something I did find was that it wasn’t all that consistent. 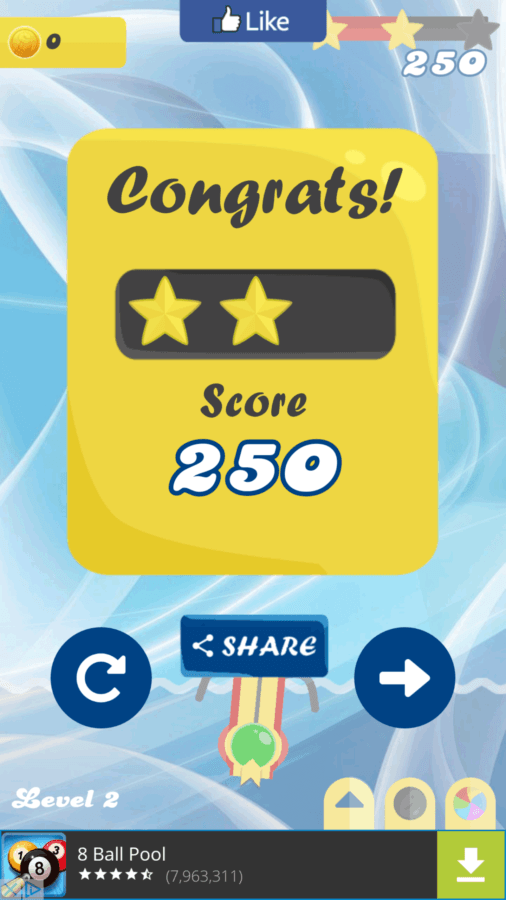 For this two-star rating I was awarded I actually completed the level in very, very few moves. I removed all the bubbles without missing a single shot, and did so in say three or four shots, max. So, I wonder how I would have gotten three-stars for that level? The issue of ads in Bubble Shooter 2017 is a sticky one, as the ads that are constantly on display aren’t too much of a problem given the simple nature of the game – and developers do need to make money at the end of the day – but some ads are a little iffy, but the developers are working on this.

After spending some time with Bubble Shooter 2017, it’s pretty easy to see who will enjoy the game, as well as those that wouldn’t. For instance, players that enjoyed the original Puzzle Bobble and the many clones out there will enjoy this, if not only for the familiar gameplay as well as the huge amount of levels on offer. Elsewhere, however, there will be players that don’t so much enjoy the onscreen ads as well as the fairly basic gameplay. Sure, this is a fun game, no doubts there, but the power-up ball and the color changing option require the use of in-game coins, which are pretty difficult to get hold of when playing the game. As such, few players will end up using these extras, and in reality the game is so easy that many players won’t even need them, either.

All-in-all, Bubble Shooter 2017 is what it is; a simple and fun Puzzle Bobble style game for Android. It’s not much more than that, but given that this sort of game is popular, it perhaps doesn’t need to be. With over a thousand different levels on offer as well, there’s a lot that players have to do when playing Bubble Shooter 2017 and it should provide hours and hours of fun.