3D MMO Heroes & Villagers is an MMORPG game for Android that features high-quality 3D graphics, thousands of different quests, set in the Seven Realms, players will be able to take on a number of different roles and jobs, as well as enjoy a unique Sandbox experience thanks to the Gnomish Augmentation features. Players are not just required to stick to the eight different builds and character roles that 3D MMO Heroes & Villagers has on offer, as they can deviate from this path and essentially do whatever they want. Found within these Seven Realms are seasonal events, and players can explore hellish volcanoes or gorgeous sunsets as they embark on an epic journey. Players can craft their own equipment and if they want to, they can explore the lore and backstory of the Seven Realms by learning more about the Legendary Four warriors; Marat, Celestia, Voltan and Calypso.

Those looking to play a new kind of MMORPG on Android will just need to download 3D MMO Heroes & Villagers from the Play Store. New users are given the option to sign up with a new account, log in with their PC account, or even play as a guest to get a feel for the game at first. 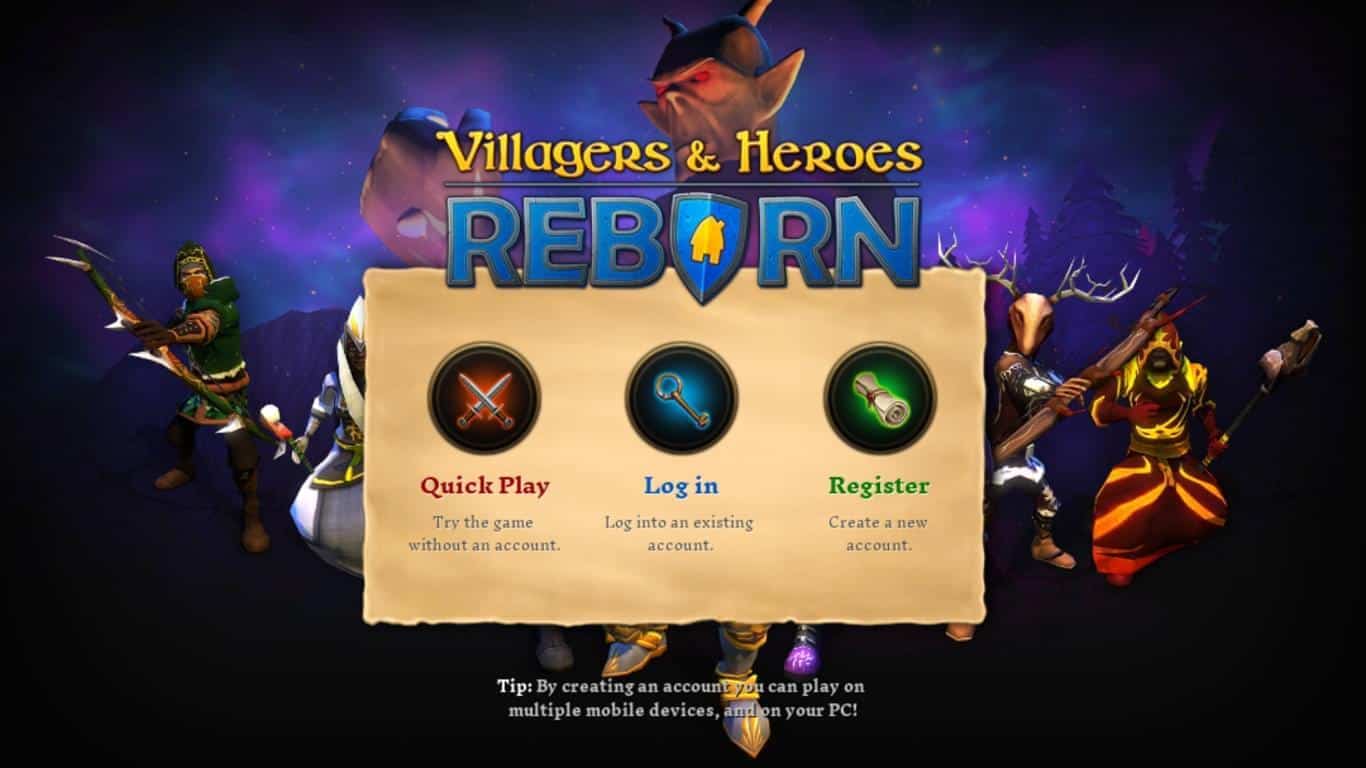 To sign up to 3D MMO Heroes & Villagers, there’s not a huge amount that users need to do, and once they have made an account, they can even play on their PC as well, something that more MMORPGs like this should seriously consider. From here, users will need to go through the classic RPG character design stuff, and it’s nice to see that 3D MMO Heroes & Villagers has struck a right balance between customization as well as ease of use here. There’s also a quality voiceover that runs through the whole thing, which gives the game an added level of polish. 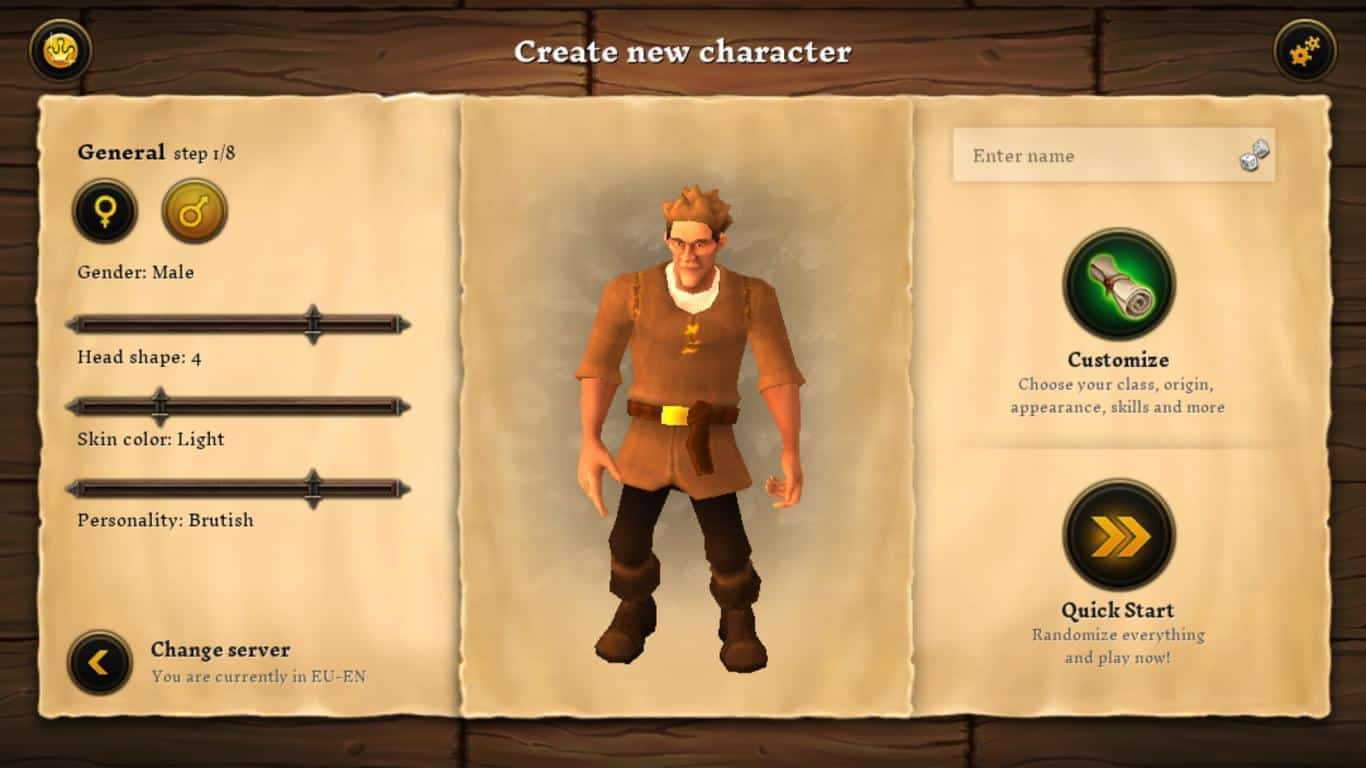 An important part of the overall process, this character selection screen goes through such things as class selection, of which there are eight different types – Defender Warrior, Fire Wizard, Holy Priest, Assassin, Swift Warrior, Ice Wizard, Shadow Priest, and Bow Master – as well as the Origin of your character, which also serves as the first real introduction to the setting of the Seven Realms, which appears to be a well-designed Kingdom for a sort of game like this. 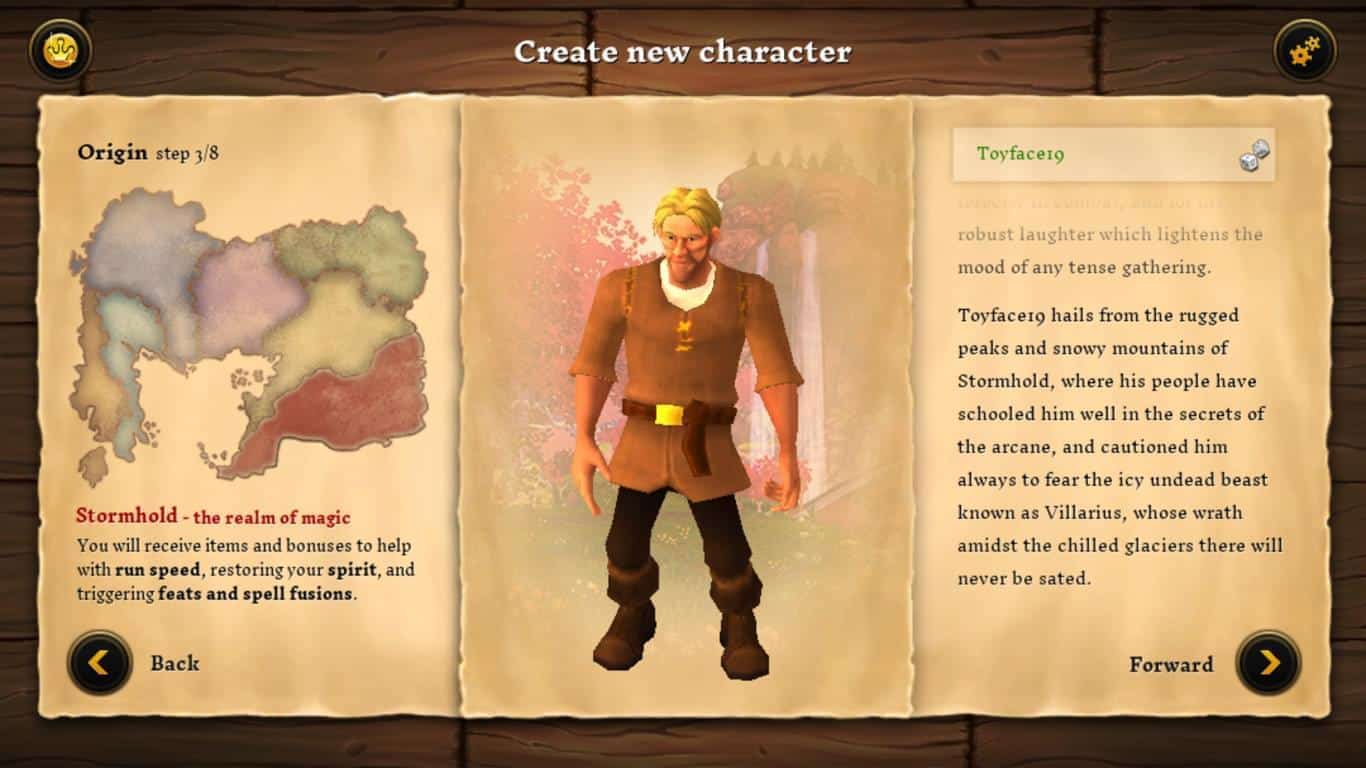 Players are then thrust into the game in a sort of training/tutorial area which gives players a look at how the controls work as well as how to move around and such. 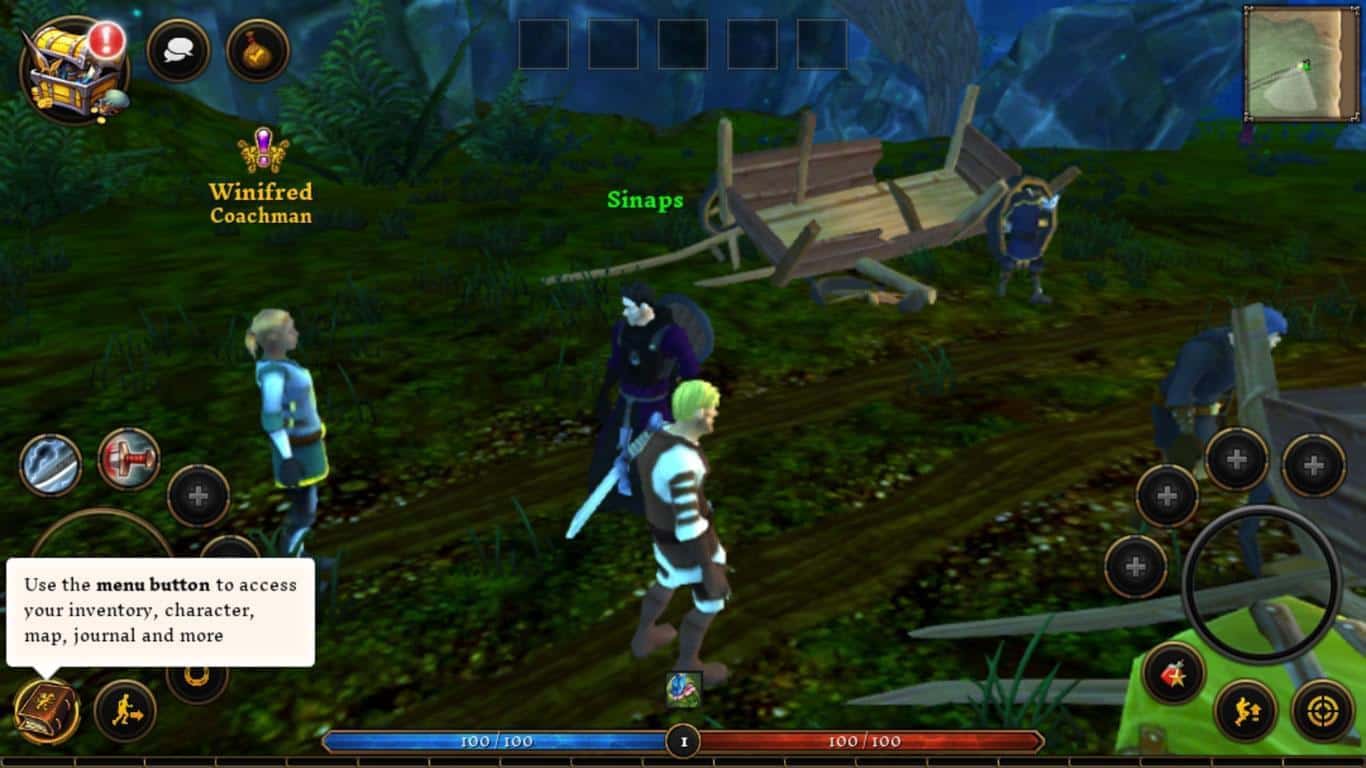 My first impressions of the game from this were very positive, and while the overall graphics could be a little sharper and higher-resolution, there’s a lot going on in each scene, and there’s little lag or slowing down, either. Controls are good, and the game certainly feels something more like a console game than it does a simple mobile RPG game. Right away, players can see that they’re in a quality MMORPG as there are other players around you at all times, and the attacks and controls feel familiar. 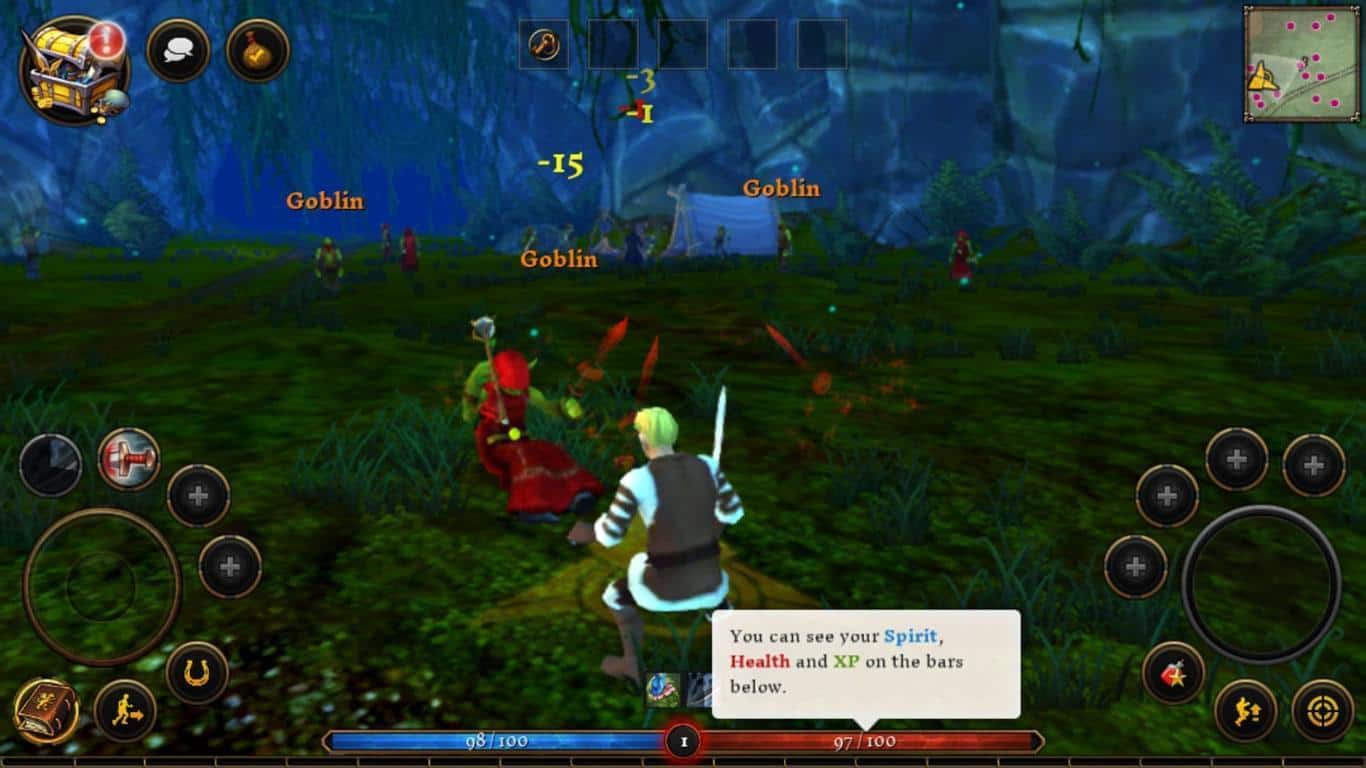 Talking with NPCs is another big part of games like 3D MMO Heroes & Villagers, and while not all of the content here is voice-overed, the intros often are, and it all sounds great, with clear and readable text to go along with it. 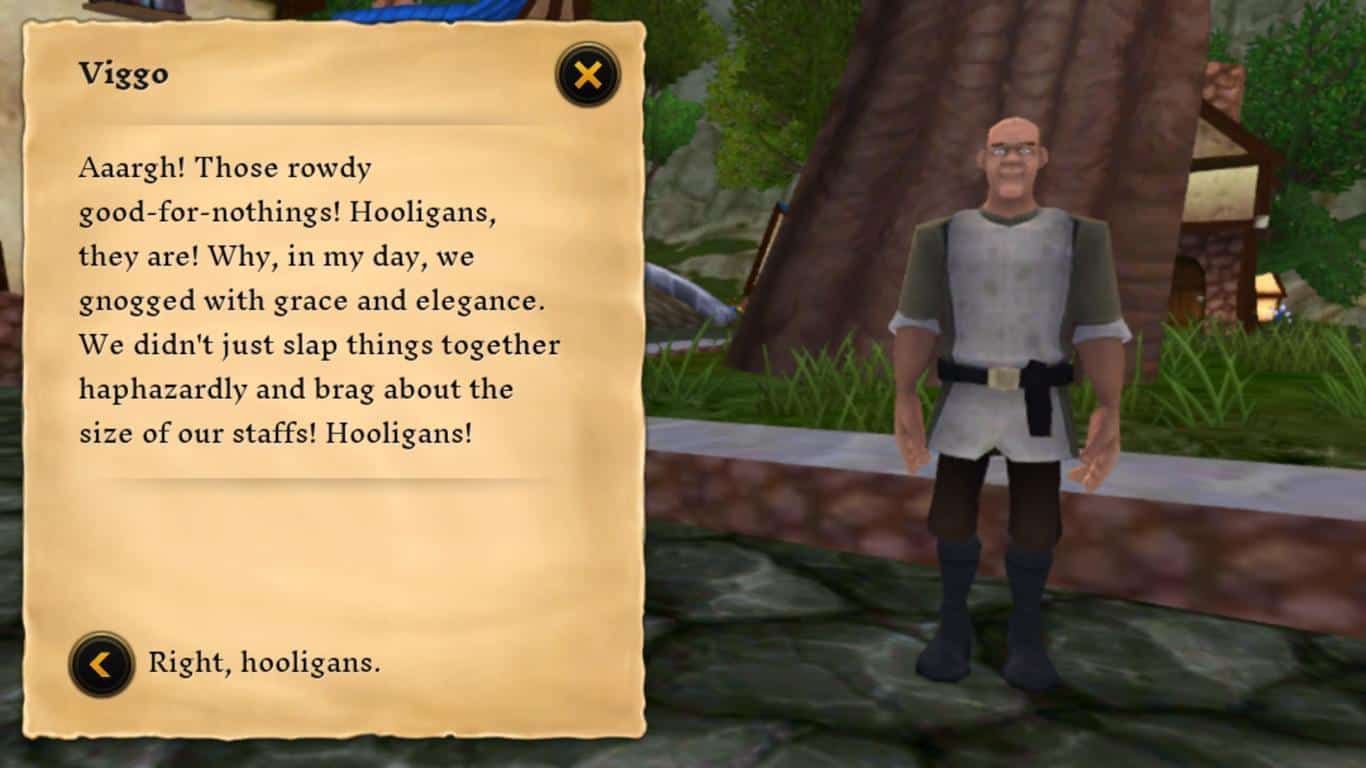 Quests are assigned similarly to the fashion in which they are on a PC-style MMORPG, and there’s little jumping through hoops – if at all – that users need to when getting started with 3D MMO Heroes & Villagers. In fact, the included chat even had some new users that were looking to help others when I first started with the game. 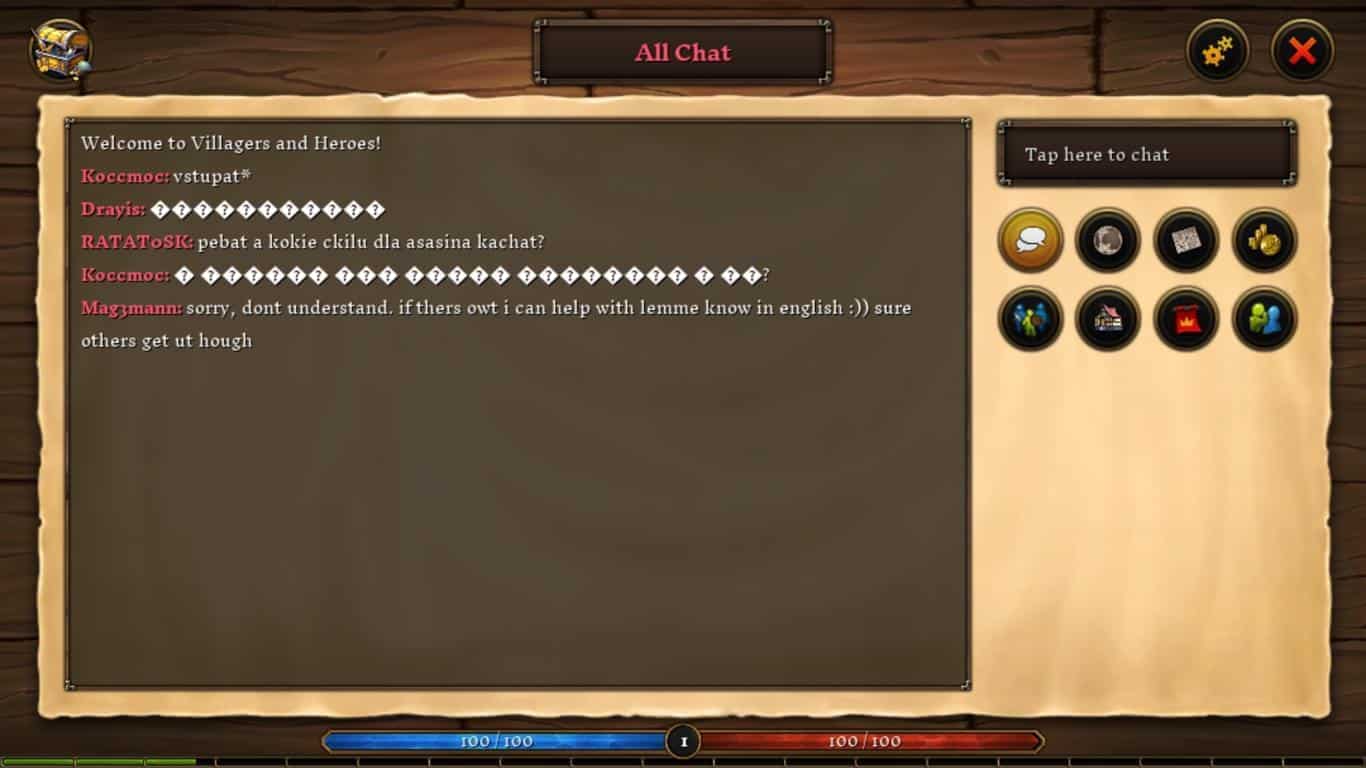 A key element of any MMORPG is a starting town, something that offers travelers safe haven, all the while getting players used to controls, the world around them and more. Thankfully, 3D MMO Heroes & Villagers has that in abundance, and the first town that users come to is a good-looking place, which goes to show off the unique sort of graphics style that will remind some of classic RPGs from over the years. 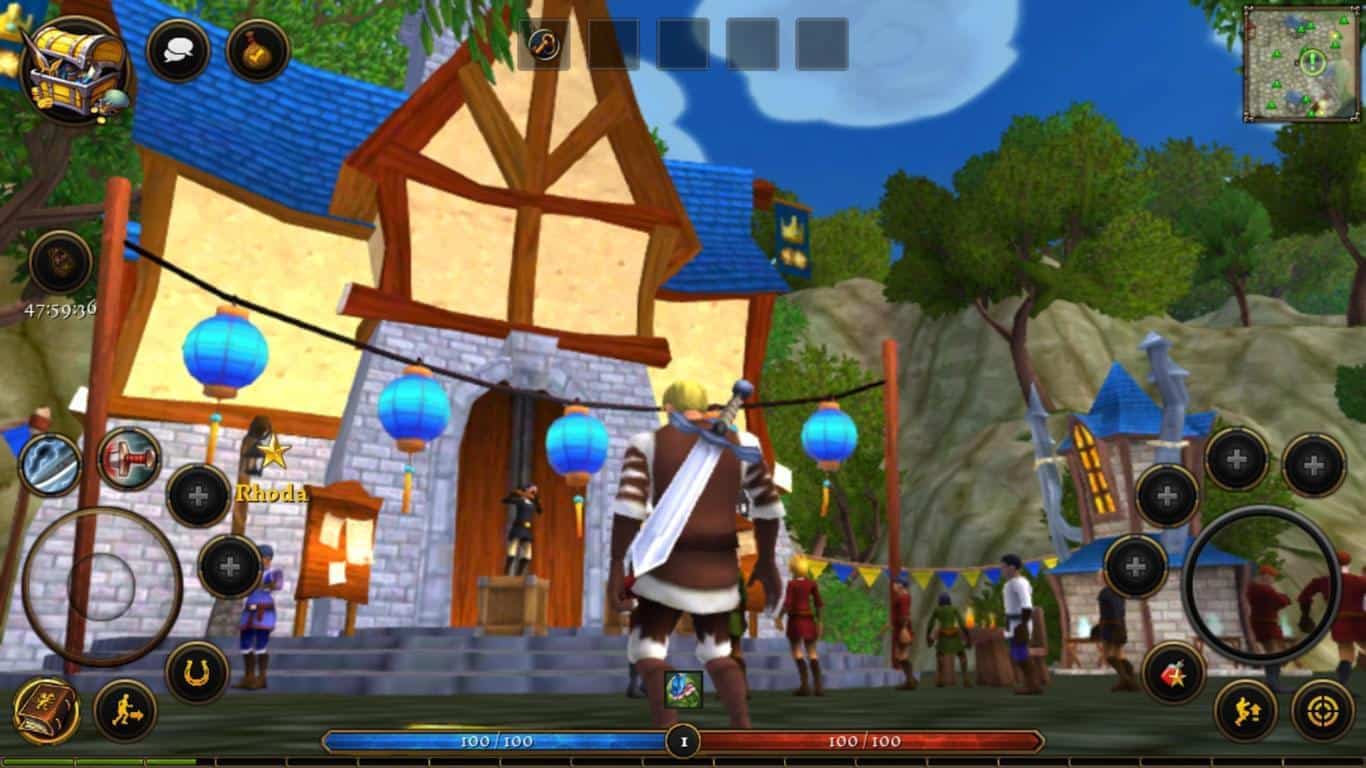 One of the things that I really enjoyed about 3D MMO Heroes & Villagers was the fact that players can very much just go off and do their own thing should they wish to, and running off to go and explore and do your own thing is encouraged and great fun, too. 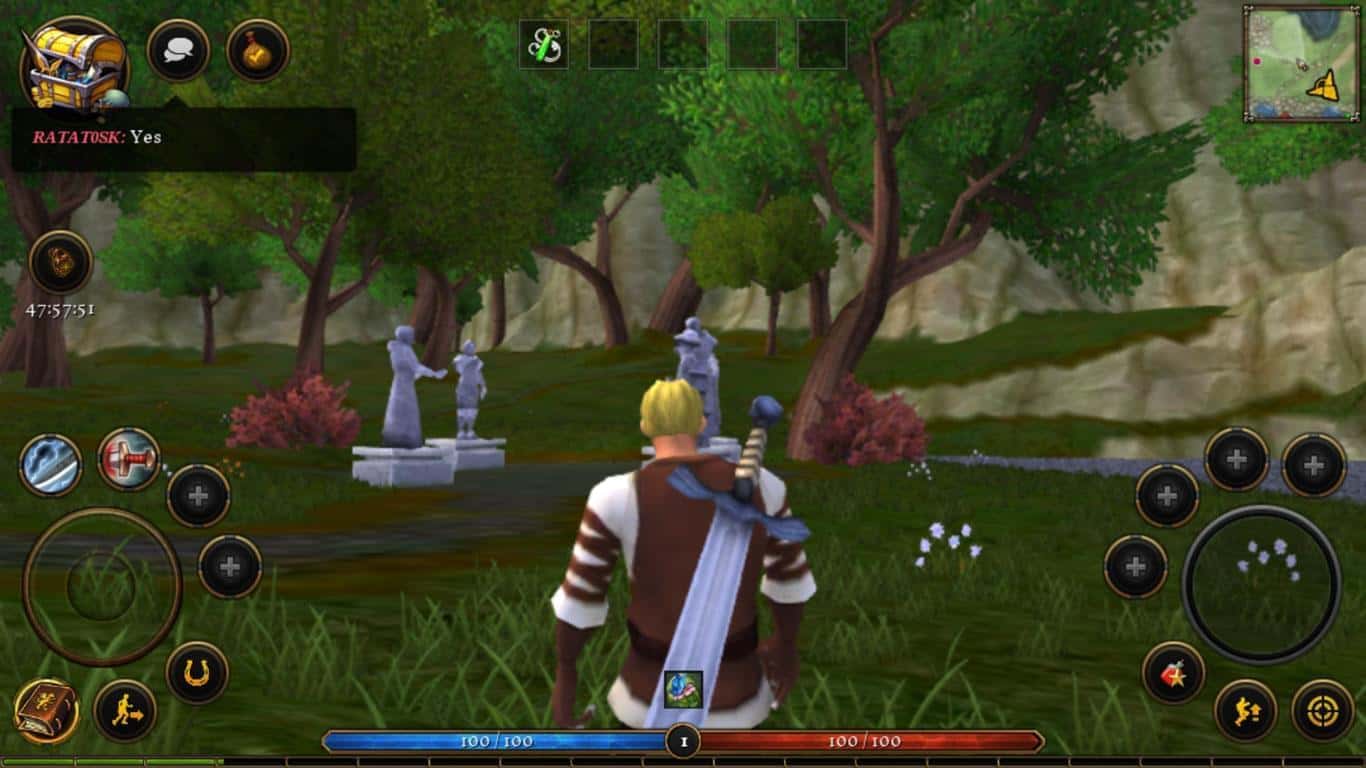 Over time, users will find more and more parts of the Seven Realms to explore and have fun with, and each different area changes from the last, with a wide variety of different areas to keep things nice and fresh over time. This variety in surroundings is something that will keep players engaged and interested in things for a long time time, rather than giving them the same things to see and do over and over again.  Character progression is handled in the usual levelling up sort of manner, but it’s done on a per-skill basis, sort of the way Skyrim does it, and users can end up with a character very proficient in some things, and not at all in others, should they choose to. In the below shot, it’s clear that I’ve only just got started in the game, and I have a long way to go in terms of creating a warrior to be feared. Over time, however, the amount of skills and such that players can level up and use in battle will certainly spice things up. 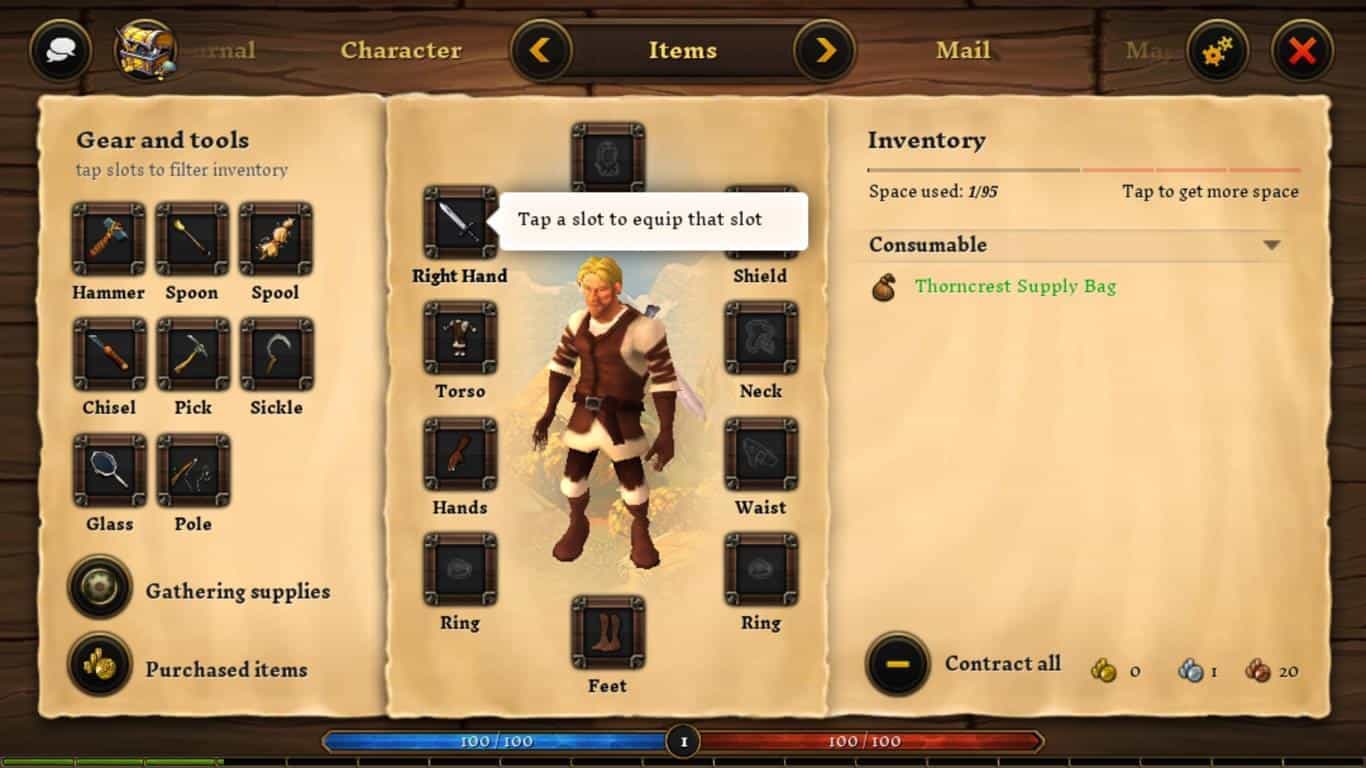 Players can of course customize their own gear, and a lot of that can be done through crafting and creating their own armor and weapons. Part of this is done through the option to create a sort of life for your character away from all of the fighting and such. Players in 3D MMO Heroes & Villagers don’t have to be fighting all of the time, and can happily go about their business tending to their crops or harvesting raw materials. 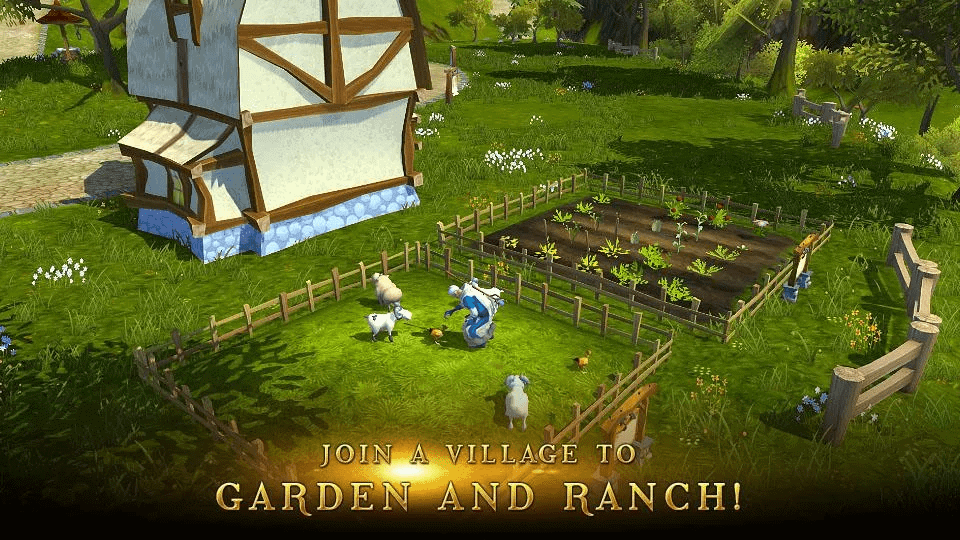 Of course, those that do want a strong challenge will no doubt be happy with the selection of different quests on offer, as well as the different ways of perfecting their character, but the boss battles are certainly worth playing for on their own, too. 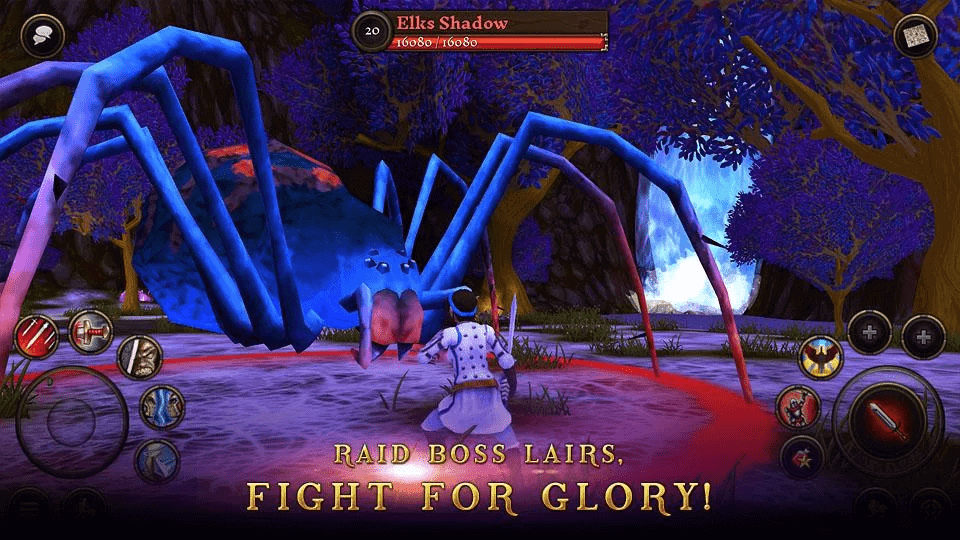 There’s so much to see and do in 3D MMO Heroes & Villagers that it would certainly be difficult to get the bottom of everything in a short space of time. That’s kind of the point here, and the mix of both combat as well as village type stuff like crafting and farming help to make this a game that will appeal to a wide, wide range of MMORPG players, as opposed to just those in it for the combat. While the graphics themselves are a little soft in appearance, the game itself does have a unique look and feel that will appeal to classic RPG players, all the while letting people explore different areas of the game. The world of the Seven Realms and its lore surrounding the four legendary warriors is great fun to get immersed in and explore, and gives users all kinds of different quests and leads to follow at every turn. Controls and combat are both great, and the variety fo quests as well as items and character choices that players can make all lead to a game that has all of the right boxes ticked for the vast majority of MMORPG players. 3D MMO Heroes & Villagers is the sort of game that will appeal to those looking for a classic RPG style of game, with modern additions and a whole lot to get their teeth stuck into.

All-in-all, 3D MMO Heroes & Villagers is the sort of MMORPG that a lot of people should try out, as there’s more than enough to keep them busy for months on end, perhaps even longer. The graphics look good, the controls are simple, and there’s a lot of different types of things that players can do when playing through the game overall. A great MMORPG that feels more like something you’d find on a console, 3D MMO Heroes & Villagers can even be played on a PC using the same account, and it’s a lot more than an MMORPG purely for the sake of it, as the whole world of the Seven Realms is well-crafted and a delight to be part of.