Simple Drums Deluxe is a free Android app that points a number of different drum sets at your finger tips, allowing users to play Drums no matter where they are. Musicians can plan new rhythms, test out new jams and things no matter where they are and music fans can simple learn some of their favorite songs or drum along with their own favorite music. Simple Drums Deluxe provides 7 different Drum sets, as well as 40 different tracks to choose from in order to drum along with – these are great for learning and perfecting rhythm – and it also includes sound effects of halls and such. Simple Drums Deluxe has the option to play along with music from your device, and has loads on offer for a free app. Let’s give it a bash, shall we?

First thing’s first, players will need to download Simple Drums Deluxe from the Play Store before they can get started, and once they have done they can choose from a number of different Drum sets. All of which cover a different type of music. 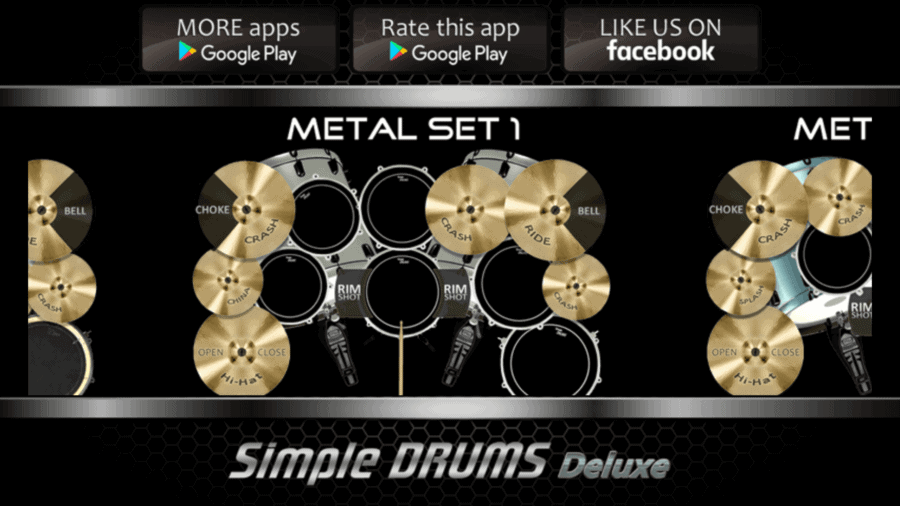 Simple Drums Deluxe features Rock, Metal, Blues, Jazz, Latin and Basic drum sets to choose from, some of which sport a number of different sets to them. When playing around these Drum sets, users can simply drum along to their heart’s content, with no limit on how long they can play for, or on what parts of the Drum set they can use, either. There’s even the option to change the sound effects to make it feel like you’re playing your own sold-out stage show. 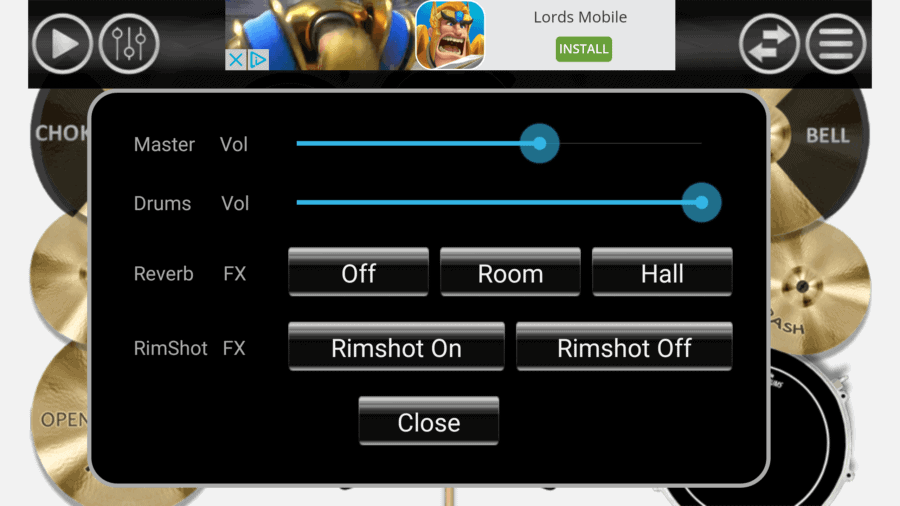 Of course, to do that you’re going to need some backing-music, there are few drummers out there that can a hold a show on their own. As such, it’s great to see that Simple Drums Deluxe has a number of included tracks to play around with. I really enjoyed some of the Metal tracks, all of which sounded meaty and very appropriate. 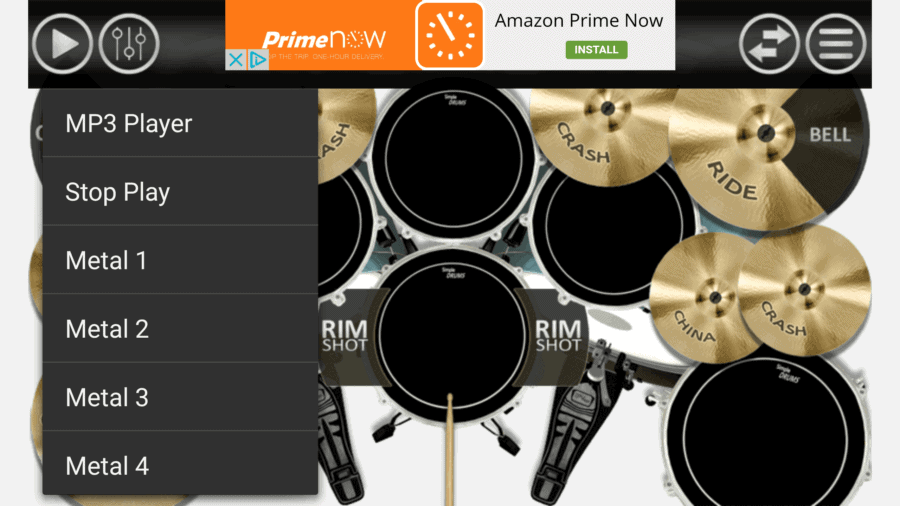 In addition to the 40 different Rock, Metal, Reggae, Blues and Jazz tracks that the app has on offer, users can of course play whatever they want on top of their Drum sets. This feature is billed as a way to play MP3 files while drumming, but I found it to be much more versatile than that. I, for instance, was able to open up Spotify and play whatever I wanted – all I had to do was switch back to the Simple Drums Deluxe app and I could carry on drumming. 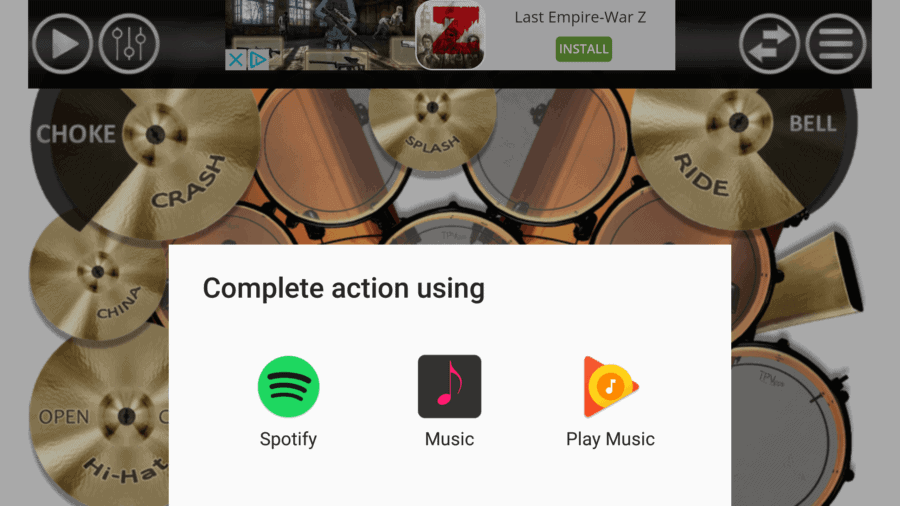 Imagine the sort of potential that something like this has for fans of SoundCloud, for instance, as users can find instrumental tracks without drums and then practice along to that or try to make their own masterpiece. Of course, that would be if Simple Drums Deluxe had any way of recording things built-in to it, which at the moment, it doesn’t. The different Drum sets on offer here are perhaps reason enough to download and play around with Simple Drums Deluxe, as there options here such as the Latin set that give users the opportunity to try out a totally different sound – all without paying a penny for it. 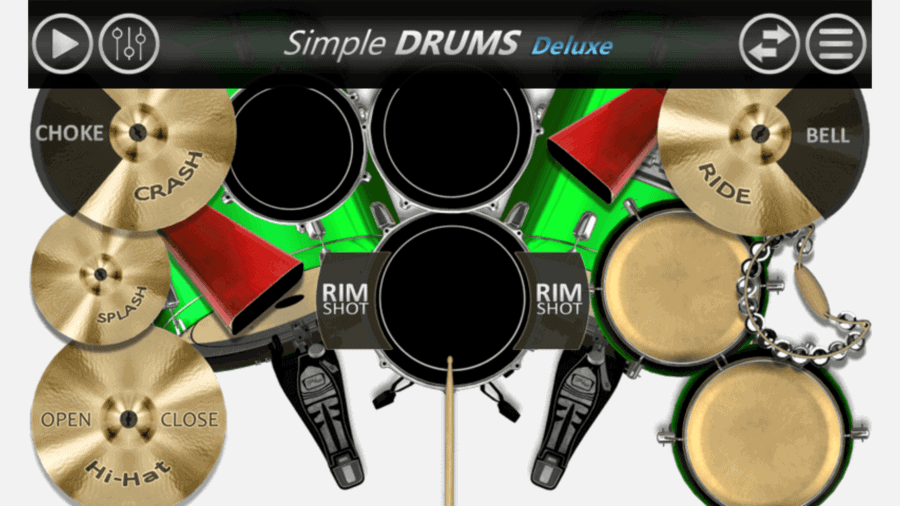 Extras throughout all of the sets include subtleties such as the ability to either, ride, crash or choke a cymbal, rather than just one type of it as well as the option to move the high-hat to the left or right of the display, should they wish to.

Drum kit apps like this have been around for years now, and by all accounts it doesn’t seem too difficult to make one, and it isn’t, except that making a good one that’s free seems to be pretty difficult. That’s Simple Drums Deluxe really is, a quality free Drum kit application that works well on the majority of hardware out there, doesn’t ask much of the user, and just lets them get on with it, however the hell that it is. Simple Drums Deluxe is a nice middleground between the free and paid options out there. It’s free, and yet has a lot more features than you’d expect, but then it stops short of offering paid features such as the ability to record your drum tracks and to share them elsewhere. All-in-all, I was pretty impressed by the amount a free app like this can offer users, and is well worth giving a try, regardless of whether or not you’re Lars Ulrich.

All-in-all, it’s hard not to like Simple Drums Deluxe, it has all kinds of different Drums on offer, as well as backing tracks to match, making it simple to experiment with something you know, or with something different. All of the 40 different tracks and different Drum sets are available here for free, and while it would be nice to see some better-looking graphics overall, the app runs well and is super-simple to use, too. The option to record what you’re playing will be a sore point for many, though.