For Sony, things might not be going quite as well as they hoped, but that doesn’t mean the firm isn’t resting on their laurels. The firm has been known for solid, bug-free Android updates for years now, even if they might not be the quickest. Some time ago, the Japanese firm opened up a beta, dubbed the Xperia Beta Program, which first opened its doors as a way for users to test out a new and upcoming UI that we now see on newer Xperia smartphones. Now, however, the program is used to test upcoming Android updates, too. The Xperia X Performance is next in line, and the update that the team will start testing is none other than Android 7.0 Nougat.

users that have signed up for the Xperia Beta Program have been getting emails with the below message enclosed, which quite clearly states that the upate to Android 7.0 Nougat is going to be tested as part of this round of the beta program. While the Xperia X Performance is not the latest smartphone from Sony, it is arguably their closest to being a flagship level of device, shipping with a Snapdragon 820 and a classic 23-megapixel camera from Sony themselves. The update to Android 7.0 Nougat will apparently start to hit Xperia X Performance devices in the next couple of days, which no doubt means that there will be ports of the software to older Xperia devices, as well as perhaps the new Xperia XZ and Xperia X Compact.

The update to Android 7.0 Nougat is unlikely to contain much in the way of extras for Sony users, but those looking for the latest and greatest Android software will no doubt be looking forward to this. Given that Sony have pared down their software a little bit over the past few years as well, the new additions in Android 7.0 Nougat such as Direct Reply should appear more apparent than on other devices. As for users waiting for Android 7.0 Nougat on HTC, Samsung and LG phones it appears all of the companies are hard at work bringing the new update our way, so it seems as though a little patience is required. 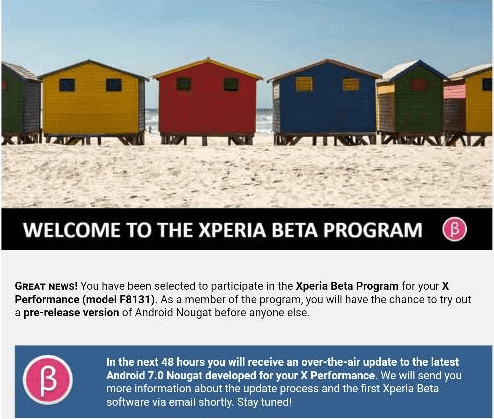