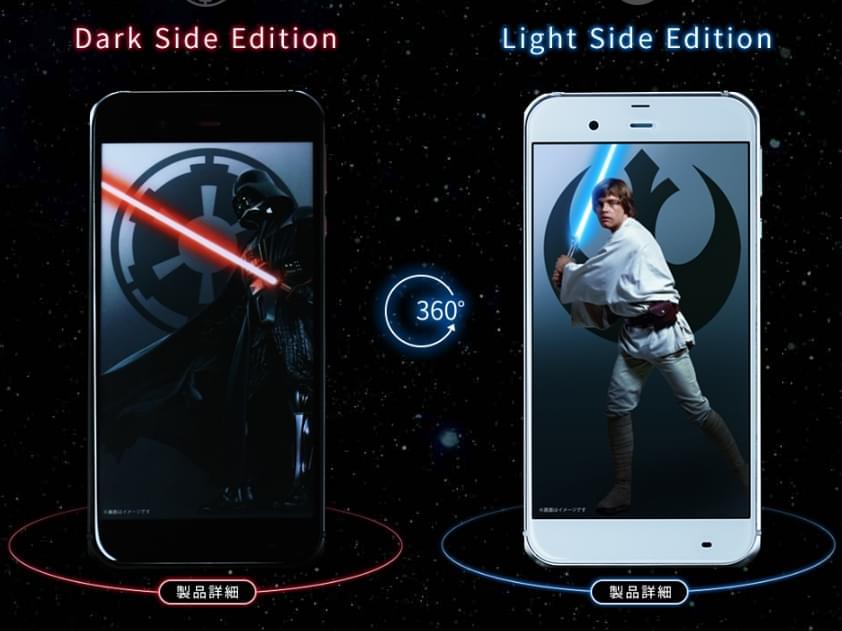 We've seen tons of different smartphones released to date, and some smartphone manufacturing companies actually released themed devices, like Samsung for example, the company had partnered up with Marvel in order to release the special edition Iron Man Galaxy S6 Edge. Something similar happened a year later when the company released the Batman Edition (also known as 'Injustice Edition') of the Galaxy S7 Edge, though this time around Marvel was not a part of the picture. That being said, Sharp just did something similar, read on.

Sharp is a Japan-based company, as many of you know, and they've just introduced two Star Wars-themed smartphones. Star Wars is one of the biggest franchises in the world, and consumers in Japan can now choose between the 'Dark Side Edition' or the 'Light Side Edition' Star Wars smartphones. These two phones are completely identical in terms of the design and specifications, but they do sport different paint job and different content on the inside. Each of these phones features a 5.3-inch fullHD display, 3GB of RAM and the Snapdragon 820 64-bit quad-core SoC. The 3,000mAh battery is also a part of the package, and you also get a 22.6-megapixel camera on the back of each of these smartphones. Sharp's new devices are 7.6 thick, and they come with a TV tuner as well.

Now, as far as special content is concerned, you do get some special live wallpapers inspired by X-Wing and TIE fighter cockpits, while menus are also skinned on these phones. Metal figurines are also included, and so is a movie play app, and a Star Wars card game with a free gold card pack. You will also find some special emojis and ringtones here, and the lightsaber app is available on the inside as well, of course. These two smartphones will become available early next month, and consumers in Japan will be able to purchase them from SoftBank, a Japanese carrier. This is a rather interesting move by Sharp and SoftBank, and one that not many people expected. Sharp tends to release exclusive phones for Japanese carriers in their homeland, but very few people expected Star Wars-themed smartphones. We doubt any of these devices will become available outside of Japan, but who knows, we'll see.