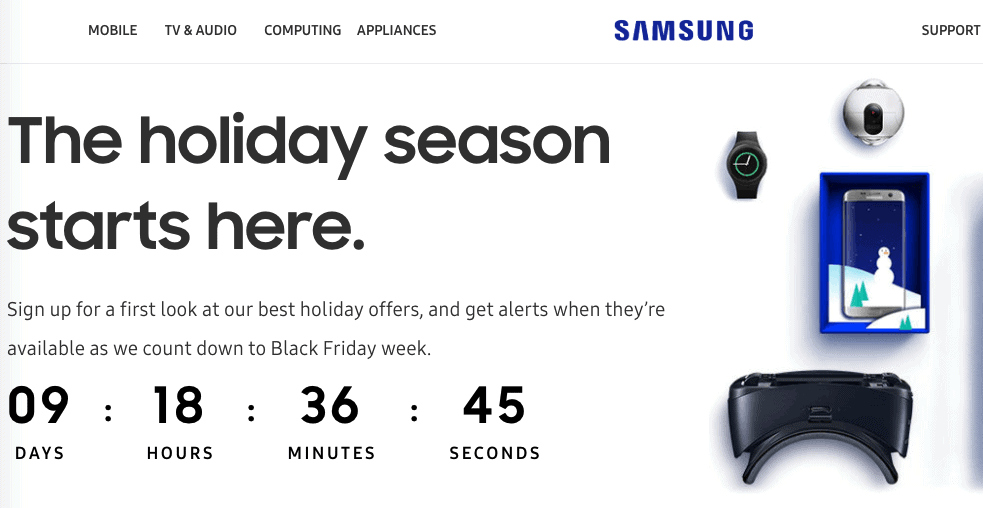 Samsung, and most other manufacturers and retailers, are gearing up for the holiday season. The first big day of the holiday shopping season is actually Black Friday. Which takes place on November 25th this year, and Samsung is already starting the hype machine on what deals they will be offering up for Black Friday this year. They have a new website up and available, but they aren't really showing what products are on sale nor what their prices will be. But Samsung does say that you can sign up to get a preview of what will be part of their Black Friday sale. You can also choose which categories you're interested in. Including TV's & Home Theater, Tablets & Computing, Smartphones, Home Appliances, VR & 360 Camera, and Wearables & Mobile Accessories.

With the Galaxy Note 7 being killed off recently, and Samsung upping their production on their existing smartphones like the Galaxy S7 and Galaxy S7 Edge, it's not a huge surprise to see them hyping Black Friday already, nearly two weeks out from the big day. As the company is looking to recoup all of the money they've lost from recalling the Galaxy Note 7 twice and having just the one flagship (technically two) for the holiday season. And it's a flagship that is already about 8 months old. Which is an eternity in the tech space. So far, other retailers have leaked their plans for the Galaxy S7 and Galaxy S7 Edge, which include a $250 gift card with a purchase of either device. T-Mobile is also doing a BOGO sale this weekend for the Galaxy S7.

No matter who's on your list, Samsung likely has something for them. The company makes just about every electronic you can think of. This includes TV's, speakers, smartphones, tablets, appliances, virtual reality and pretty much everything in between. Definitely worth checking out their selection of Black Friday deals when they go up. Which according to the countdown on their site, these deals should be launching at 9AM ET on November 20th. You can hit the link below now and sign up to get a preview of what Samsung will be offering for Black Friday as well.

Advertisement
Samsung's Black Friday 2016
Advertisement
Trusted By Millions
Independent, Expert Android News You Can Trust, Since 2010
Publishing More Android Than Anyone Else
45
Today
253
This Week
254
This Month
4999
This Year
106474
All Time
Advertisement