Samsung announced the beta release of Android 7.0 Nougat for its 2016 Samsung Galaxy S7 and Galaxy S7 Edge devices a week ago in three important smartphone markets: the United Kingdom, United States of America and South Korea. Beta programs are designed to allow customers or users to experience an unfinished product so as to provide feedback to the company. For a major software version such as Android Nougat, a developer – or in this case the smartphone manufacturer – will conduct a large number of internal tests, but because smartphones are both extremely complicated and customers can download and install large numbers of third party applications, it is useful to allow the pre-release version of the operating system to be tested “in the wild.” This way, Samsung can hope to capture many different device configurations and uncover bugs and glitches that might otherwise not be found until the software is officially released.

For the Samsung Galaxy S7 and Galaxy S7 Edge smartphones, Samsung is using its toned-down user interface, called Grace UX, which has left a number of features as stock. Samsung has made a number of subtle tweaks to the interface such as the color scheme, but large parts remain as one might find on the Google Nexus devices. Google’s terms and conditions of using Android means that device manufacturers must leave some features alone, such as Android’s “Doze” power management code, but other parts of the platform may be adjusted as much as the manufacturer sees fit. Critically, Samsung have not adjusted the notification shade for the Galaxy S7 family, which means features such as in-line responses still work as stock and improves how third party applications can run.

One week after the initial launch, Samsung have released an over-the-air update for the devices, which comes in at a little shy of 100 MB as a download. The Galaxy S7 devices will automatically receive a notification of the update and give customers a choice of when to install, as showing below. Samsung’s changelog reports that the changes might includes the as-expected selection of performance and stability improvements and bug fixes, but does not appear to introduce any new features to the devices. it is encouraging that Samsung appear to be taking onboard reports from existing beta customers to improve the software but at this time we do not have any confirmation of when the official release might be available. 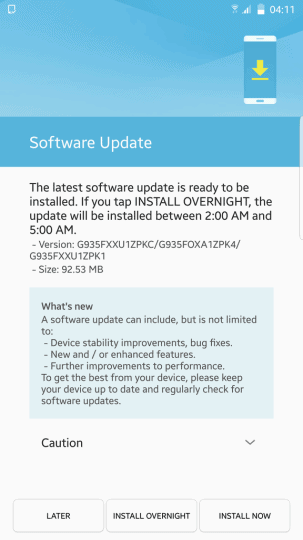