The Samsung Galaxy Note 7 was a true disaster for the company. This was supposed to be their best smartphone to date, and it was well received after it launched, but that didn't last. The company's flagship phablet had significant issues, the Galaxy Note 7 units started catching fire due to battery issues, and the company was forced to recall the phone, not once, but twice. After the second recall, Samsung had opted to stop selling the device altogether and cut their losses. That being said, it seems like the company is trying to make amends, read on

The company had already compensated owners in various ways, but it seems like Samsung France is making the extra effort. The company has been sending letters via mail to the consumers who purchased the Galaxy Note 7, and in those letters, they apologize for the Galaxy Note 7 fiasco. In addition to the apology, the consumers are receiving a free 128GB microSD card, and all that in addition to €100+ discount that they received a while back, this discount was applicable only to users who opted to exchange the Galaxy Note 7 for a Galaxy S7 or Galaxy S7 Edge. In addition to all this, the Galaxy Note 7 consumers can enter into an SMS contest in order to run for a free experience in the Samsung Life Changer Park, 1,000 people will win this award. For those of you who don't know, this is Samsung's virtual reality amusement park which is located in Paris, France. This contest is rather specific, once it opens, consumers will receive an SMS message from Samsung, and the first 1,000 that respond to it will win, and be able to choose whether they want to visit the Samsung Life Changer part on December 20th or December 27th.

It seems like Samsung is doing all they can to apologize to consumers, and make the Galaxy Note 7 fiasco a bit less painful. The Galaxy Note 7 was supposed to be the most popular Samsung-branded phablet in history, and pre-order numbers were through the roof, but unfortunately, the phone did not last for long. It remains to be seen if the company plans to ship out free microSD cards in some other regions as well, or perhaps they have something else in mind, stay tuned. 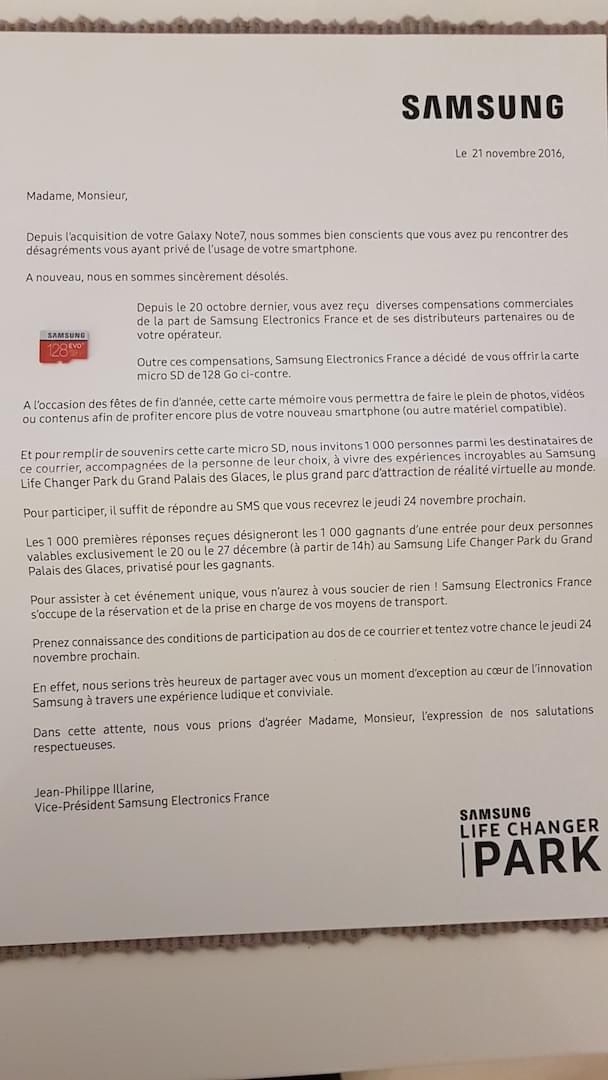