Samsung may be one of the biggest names in the world of consumer electronics, but the company hasn’t been having the best of times over the past few months. After having pulled the plug on the Galaxy Note 7 because of the phone’s propensity to burst into flames, the South Korean tech giant recently issued a recall for about 2.8 million top-loading washing machines in the U.S. for an alleged manufacturing flaw that allows the machines to come apart violently during high-speed spin cycles, thereby presenting a risk of grievous injuries to anyone nearby. The company may be having a hard time battling the twin PR nightmare, but seems determined to gain back some of the trust and goodwill it has lost because of the events of the past few weeks.

In an effort to do just that, Samsung on Monday took out full page ads in three major US dailies, apologizing for the twin fiascoes that now threaten to ruin the goodwill the company has so painstakingly built up over the past couple of decades not just in its homeland, but in most regions around the world. The ad, which ran on the November 7th print editions of The Wall Street Journal, The New York Times and The Washington Post, was signed by the president and CEO of Samsung Electronics North America, Mr. Gregory Lee. Through the ad, the company issued an unconditional apology to consumers, saying ‘Sorry’ for not being able to deliver on its promise of “best-in-class quality”.

Samsung also promised to continue its internal investigation into the Galaxy Note 7’s issues to determine what actually went wrong with the device that had originally been launched back in September to much fanfare and glowing reviews in the media. According to the ad, “An important tenet of our mission is to offer best-in-class safety and quality. Recently, we fell short on this promise. For this we are truly sorry. We will re-examine every aspect of the device, including all hardware, software, manufacturing and the overall battery structure. We will move as quickly as possible, but will take the time needed to get the right answers”. The groveling apology issued by the company also includes mention of the washing machines, millions of which have been voluntarily recalled by the company because of product safety issues, as mentioned already.

The ad ends with Samsung seeking to reassure consumers that safety remains a priority for the company, and that it will “learn from this and act in a way that allows us to earn back your trust”. It will be interesting to see how long it will take for consumers to flock back to Samsung following the dual disasters, but the company is seemingly leaving no stone unturned in its efforts to reach out to concerned customers. The company’s recent effort to say thanks to its partners in China didn’t really go down very well with the country’s social media commentators, so here’s hoping its efforts to apologize to consumers in the U.S. will be received a little better by the target audience this time around. 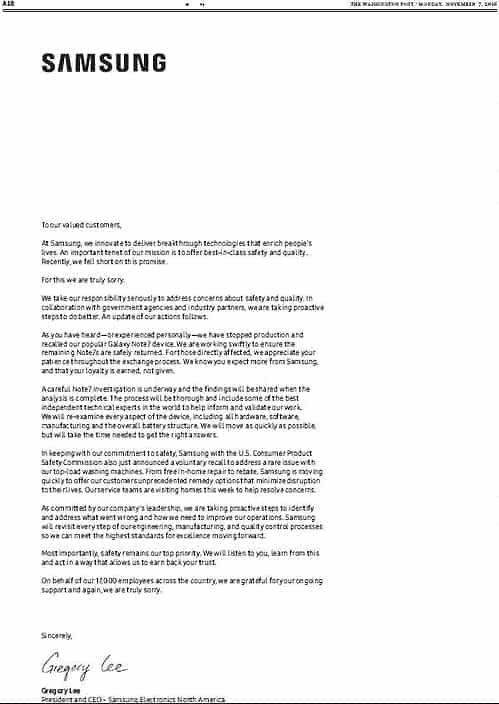