Considering that Android 7.0 Nougat launched around the end of the Summer, it’s about time that we started to see this latest version of Android hit other devices outside of the Nexus family, even more so now that Android 7.1.1 is edging closer to its own final release. For some time now, Samsung fans have been paying close attention to the ongoing beta for Android 7.0 Nougat, and while there have been a few updates to that version of software already, it’s only available in the UK, China, South Korea as well as here in the United States, but this is perhaps likely to change, at least if a recent conversation with Samsung Customer Support is concerned, that is.

As SamMobile is reporting, a recent conversation with Samsung’s online chat suggests that the beta is about to expand to more users next week. A tipster was looking to gain more information on when or if the beta will be available in their home country of the Philippines, and was told to “wait until early next week for its release to your device”. In the same conversation, it was revealed that the update was to roll out to devices properly starting February next year, which seems like a long way from a beta testing period to a final launch, especially for an update like this. Regardless, it’s clear that there will be some users that will be waiting longer than others, but we would have thought that Samsung is working hard to get the update available sooner rather than later.

So far, the beta testing period for the update to Android 7.0 has revealed a number of changes for users of the Galaxy S7 and Galaxy S7 Edge, such as a change to the default resolution for the former, as well as a closer look at the Grace UI that originally launched with the ill-fated Galaxy Note 7 earlier this year. The conversation with the customer service representative can be viewed down below and while many users will still be waiting for the update, it’s good to see Samsung develop the update out in the open. 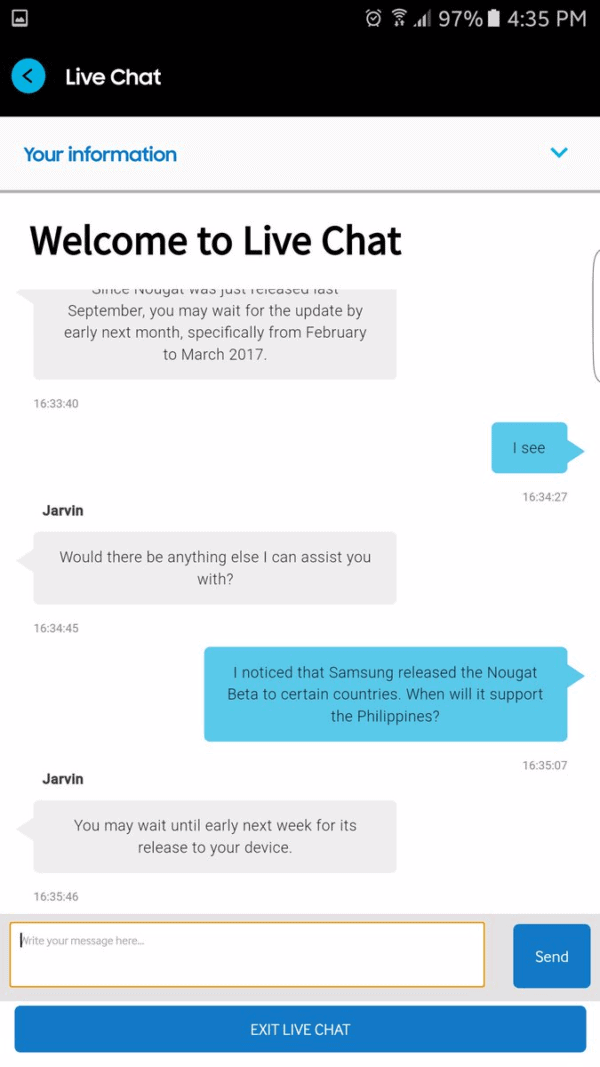