Samsung has always made compelling smartphones, especially at the premium end of the market. Which is why the company has managed to dominate the global smartphone business for so long. However, unlike companies like Nokia, the South Korean electronics giant has been fairly conservative when it comes to offering different color options to users. Most of Samsung’s smartphones are launched in very few colors, so users wanting to stand out from the crowd haven’t always had a lot of choices when it comes to personalization. That, however, seems to be changing of late, with the company believed to be working on introducing a couple of glitzy new colors for its current flagships, the Galaxy S7 and Galaxy S7 Edge.

While a Blue Coral version of the latter has already been introduced in the South Korean market, a Glossy Black Galaxy S7 is expected to hit the retail shelves pretty soon. Now, a tweet from tech journalist Roland Quandt seems to indicate that the upcoming 2017 iteration of the Galaxy A5 mid-ranger may be offered in as many as four different color options right from the get go. According to Mr. Quandt, the handset will be offered in Black, Gold, Pink and Blue. The Galaxy A5 (2017), of course, has been in the news quite a bit over the past few months. The device has already received its Bluetooth and Wi-Fi certifications, and has also been listed on the Geekbench website, giving us some idea about its key hardware specs.

According to reports, the Galaxy A5 (2017) will feature a 5.2-inch 1080op display panel and will be powered by an Exynos 7880 processor. The device is expected to come with 3GB of RAM, but will apparently have only 16GB of built-in storage. There will, however, be a microSD card slot that will allow storage to be expanded by up to 256GB. The upcoming handset will have a 13-megapixel rear-facing primary camera and carry a 3,000mAh non-removable battery. There’s no word on either the release date or the pricing at this point in time, but if the rumored specs hold up, the upcoming device will be a decent mid-ranger whose success may well be determined by its positioning in the market. 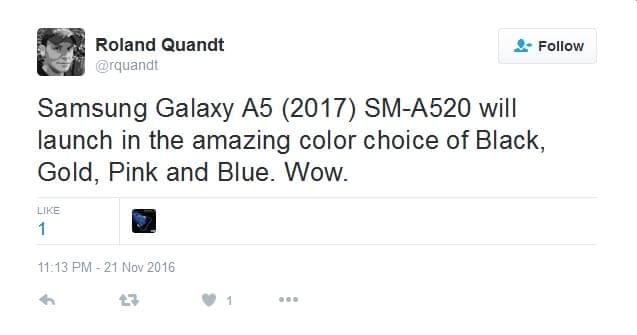