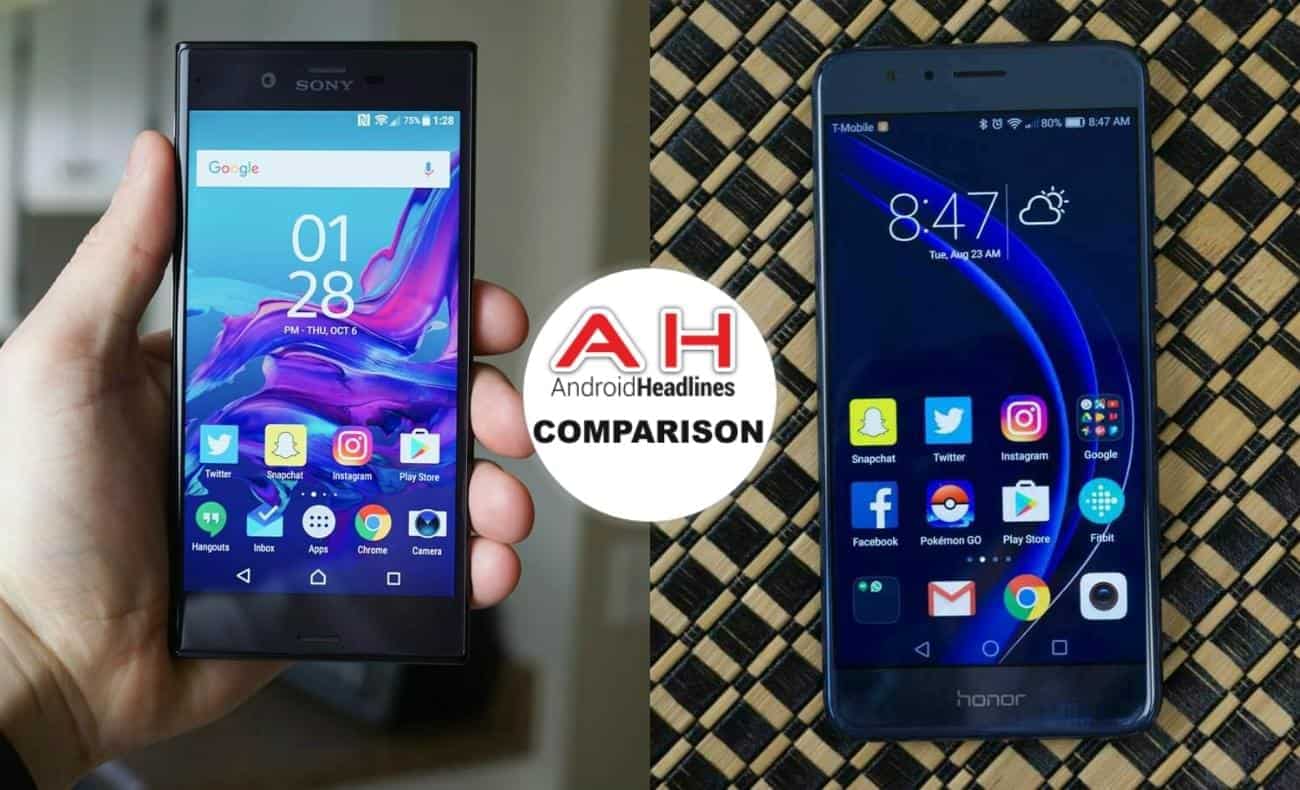 Do we have a good one for you today – the Sony Xperia XZ goes up against the Honor 8. The all-metal Xperia XZ has that usual Sony look, loved by Xperia aficionados with a rectangular shape and large top and bottom bezels. The Honor 8 is an all-glass design with its solid metal frame holding it all together. Both devices are built like a rock and are comfortable to hold for long periods. Despite their differences these two devices do have a few things in common that we will take a look at now, and then later we will look at each device to try to determine a winner of this specification comparison.

The Xperia XZ and the Honor 8 do have a few things in common. Because the displays are identical in size so are the physical dimensions, although the slightly larger Honor 8 does weigh in 8 grams heavier. The displays both use an IPS LCD display technology and both are using only the Full HD resolution. Both devices use an advanced processor but are different brands with different GPUs for graphics. They both have 32GB/64GB variants and both have room to expand their memory. Both have excellent camera areas but go about it in different ways with the Honor 8 using dual cameras. They both have large front-facing cameras (FFC) for selfies and video chatting. Both incorporate a fingerprint sensor for unlocking the device as well as authorizing mobile payments. They both are equipped with a non-removable battery with rapid charge features. They have the usual suspects – WiFi, Bluetooth v4.2, GPS, NFC, and Type-C reversible port for charging and data transfer.

Please take a thoughtful look at the detailed Specifications Comparison chart below and here you will see just how these two great devices stack up against one another – click on the "View Full Comparison" link at the end of the chart to expand the details. After that, we will look at each device in greater depth and point out some of its pros and cons. From all of this information, we will try to determine the winner based on specs and execution of design and functions.

Sony just seems to have it in for the US market, they must be the way they distribute their phones over here. Sony's latest, the Xperia XZ, bound for the US does not even have the software for the fingerprint sensor to work. That means no mobile purchases authorized by your fingerprint, let alone, unlocking your device. By flashing the UK firmware to the US Xperia XZ, you can use the fingerprint sensor – something you should not have to do on a flagship phone sold in the US. The Xperia XZ retains the all-metal backing they started using after a long history of using metal and glass. It retains the familiar Sony rectangle shape with its large top and bottom bezels. Let's see how it stands up to the new Honor 8.

The Sony Xperia XZ still uses a IPS FHD display of 5.2-inch with a resolution of 1920 x 1080 pixels and 424 pixels-per-inch (PPI.) Sony made a wise choice selecting the 64-bit Snapdragon 820 quad-core processor with dual cores clocked at 1.6GHz and dual cores clocked at 2.15GHz. It packs only 3GB of DDR4 RAM (another Sony trait), and although Android is designed to run on as little as 512MB RAM, the 3GB in the Xperia XZ did show a few signs of lagging on certain apps, but according to our review, it ran fine the rest of the time. You can have your choice of 32GB or 64GB of expandable internal memory.

Sony has always taken great pride in their cameras and lenses and this shows in the Xperia XZ's camera area. The Xperia XZ's primary camera sports a new 23MP Sony lens with an aperture of f/2.0, 24mm, phase detection autofocus (PDAF) and laser autofocus, and LED flash – Sony still does not use OIS. For its FFC it uses a huge 13MP sensor with a f/2.0, 22mm, and HDR capabilities to give you great selfies or video chats. The Xperia XZ uses a smaller 2900mAh non-removable battery with Quick Charge 3.0 to give you a rapid charge when needed.

The Xperia XZ does redeem itself with its Hi-Res audio and that great sound through dual front-facing stereo speakers. It also comes with IP68 certification for dust and water resistance – something not found on the Honor 8. The Xperia's biggest mistakes are not allowing it to operate on all major US carriers and offering no fingerprint sensor for mobile payments. It measures 146 x 72 x 8.1MM and weighs in at 161 grams. It comes in Mineral Black, Platinum, Forest Blue, or Deep Pink. It will cost you a sizable $699 for this Sony flagship. 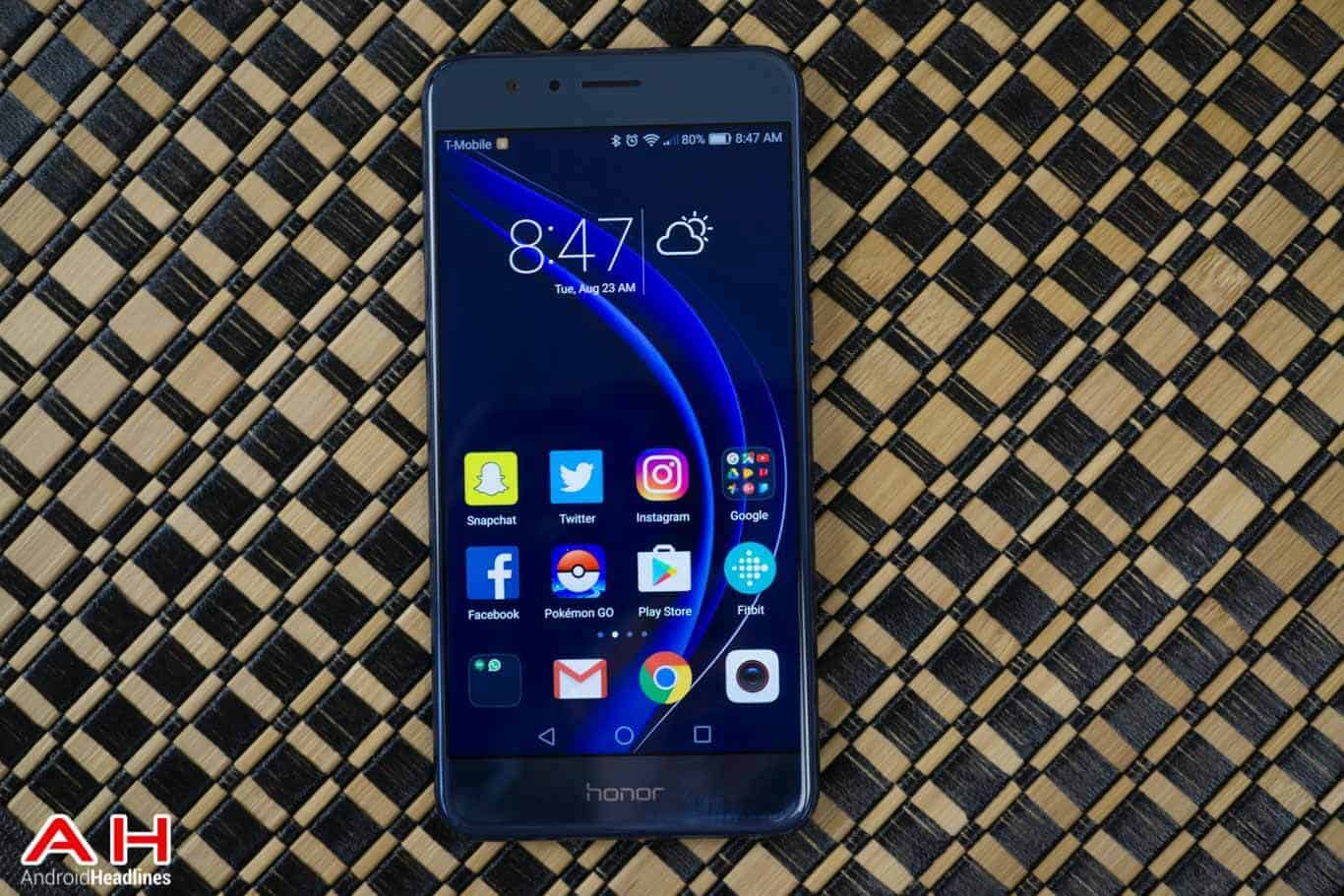 Huawei was a little known company in the smartphone community at large until Google asked it to build the Nexus 6P – it was so well received  that Huawei is cranking up its US commitment. The popular Honor 5X was released earlier this year and the Honor 8 is its replacement. Huawei's is in pursuit of going after the online shopping millennial market that continues as you can only purchase the Honor 8 online, through Best Buy or the B&H Photo website. The Honor 8 is a real beauty and a true flagship in design and specifications. It has glass on the front and the back of the device with a metal frame holding it all together – much like the Samsung Galaxy Note 7 model. It comes with a 5.2-inch display – the old sweet spot for smartphones. Just how does this $400 flagship stand up to the $700 Sony Xperia XZ?

The Honor 8 sports the same size and type, 5.2-inch IPS LCD Full HD display with a resolution of 1920 x 1080 pixels and 423 PPI. Huawei decided to go with their awesome HiSilicon Kirin 950 octa-core processor with a quad-core clocked at 1.8GHz and another quad-core clocked at 2.3GHz. Huawei paired it with an excellent Mali-T880 MP4 GPU for graphics. It packs 4GB of DDR4 RAM and 32GB of expandable internal storage.

Huawei decided to go with a dual camera arrangement on the Honor 8 consisting of two 12MP sensors with laser autofocus, a dual-toned LED flash, and an aperture of f/2.2. According to our review, it takes excellent pictures. The FFC, while smaller than the 13MP FFC found on the Xperia XZ, is still a large 8MP with a f/2.4 aperture for taking selfies and video chatting. It also packs a slightly larger 3000mAh non-removable battery that uses their Smart Power 4.0 fast battery charging to give you a 47-percent charge in 30 minutes.

The Honor 8 has a few extra features not found on the Xperia XZ. Besides working, the fingerprint sensor can act as a Smart Key that is programmable to open your favorite app or to quickly turn on your flashlight with an extra push. The Honor 8, while lacking the dual front-facing speakers, does pack DTS sound for better listening through your earphones. It is running Android 6.0.1 Marshmallow with Huawei's Emotion UI 4.1 over the top – according to our review could use a little work. The Honor 8 measures 145.5 x 71 x 7.5mm, weighs in at 153 grams and comes in Pearl White, Midnight Black, Sapphire Blue, and Gold, will cost you about $400 online, and is an excellent value for the features and build. 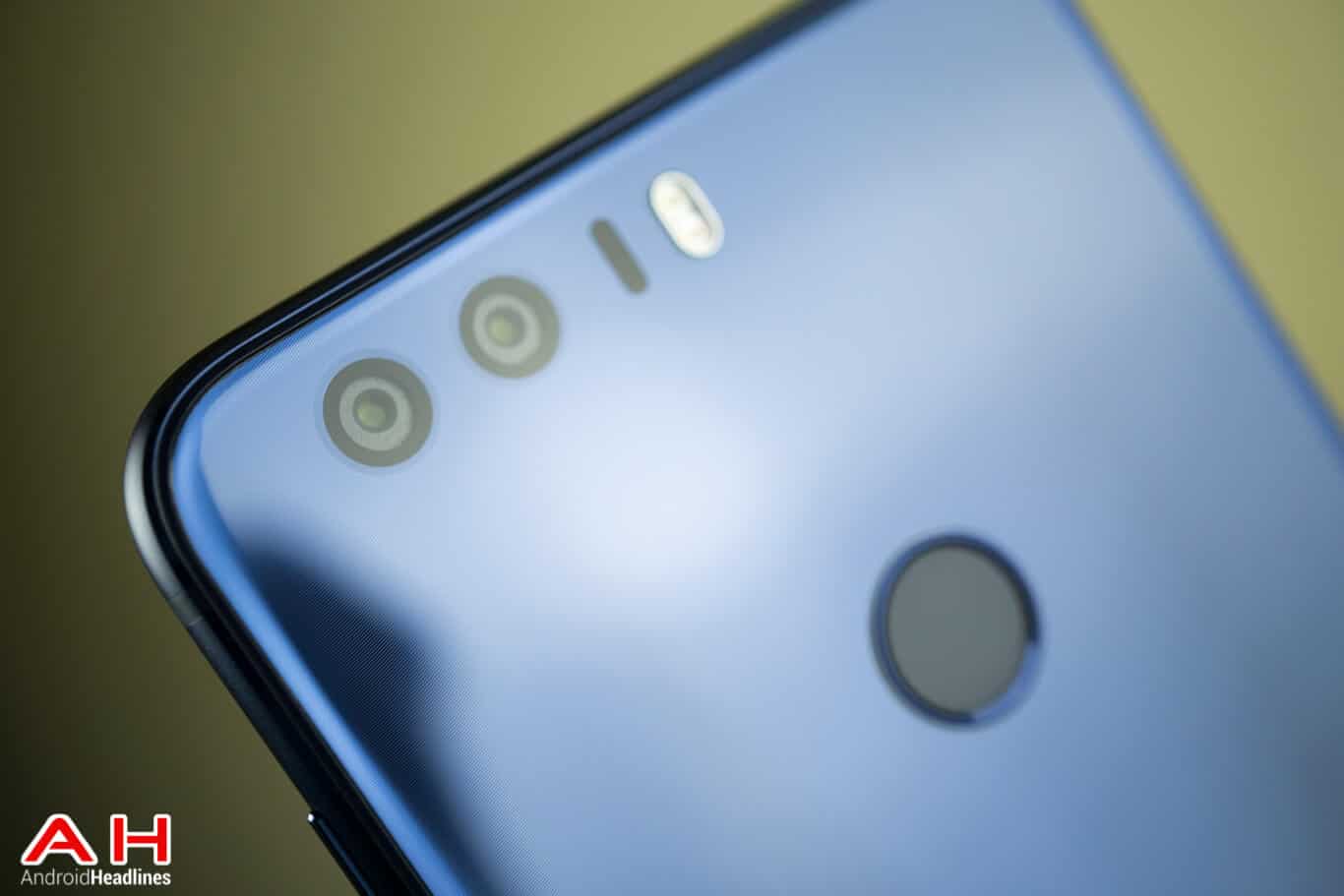 This is another case where both of these devices only work on AT&T or T-Mobile networks and that really bothers me – not giving a chance for others to use these great devices. That being said, I am picking the Honor 8 as the winner of this comparison. When you are comparing the $700 price tag of the Sony Xperia XZ to the $400 price tag of the Honor 8, that price difference has to count for something.

Both devices use the same size display, the same Full HD resolution, and even the same IPS LCD technology. They both have excellent cameras, although the Honor 8 has more options with dual lenses. The Honor 8 has more RAM and the internal memory can be expanded just like the Xperia XZ. It has a slightly larger battery than the Xperia XZ and they both offer rapid charge capabilities.

The Xperia XZ does offer IP68 water and dust resistance and dual front-facing stereo speakers, but the version being sold in the US does not have its fingerprint sensor activated. You would have to get the UK version of firmware and flash a US version if you want the fingerprint sensor to work and that is something you shouldn't have to do on a $700 flagship device.