Do we have a good one for you today – the Samsung Galaxy S7 Edge goes up against the new Google Pixel. Here we have one of the hottest selling phones, which was buoyed by the MIA Note 7, going up against the new concept from Google – not the usual Nexus smartphone, but a new line of Pixel phones, destined to be a part of the new Google ecosystem with Google Assistant in hand. It will be a while before we know how many customers will buy into this design and family of Google products, such as Google Home and Chromecast Ultra, but at least Google seems to have its marketing department in high gear.

The Galaxy S7 Edge retains its all-metal frame clutching Gorilla Glass 4 on the front and the back of the device. The dual curved edge display may have lost a little of its ‘wow’ power, but it still is a strikingly beautiful device. Many people have said that the Google Pixel devices will grow on you, but I already find them quite pleasant to look at. The polished glass and metal backing look good in my estimation. Both devices are built rock solid, have great specs, and certainly have earned their status of a flagship smartphone. The devices do share many of the many of the same internal parts and specs, but the overall feel of the devices are quite different. Let’s take a look to see just what these two devices have in common and then we will take a closer look at each device.

The Galaxy S7 Edge and the Google Pixel do have a few things in common, and even though the S7 Edge’s display is a one-half inch larger, they are close in physical size with the S7 Edge weighing in at 14 grams heavier. They both have some water resistance, but the Galaxy S7 Edge takes the prize here with its IP68 rating while the Pixel is only splash and dust resistant. The displays are close in size – 5.5-inch on the S7 Edge and 5.0-inches on the Pixel – and they use the same AMOLED technology and Gorilla Glass 4, but differ in the resolution. They both use a Snapdragon processor, the 820, and slightly improved 821, along with the same Adreno 530 GPU for graphics. They both pack 4GB of DDR4 RAM, and they both offer a 32GB variant of internal memory – the Galaxy S7 Edge can be expanded, but the only option in the Pixel is to purchase a 128GB model. The main camera areas are very similar, and both take excellent photos. They both have a non-removable battery with the S7 Edge enjoying a much larger one with wireless fast charging built in, and both enjoy a fingerprint sensor for unlocking the device or authorizing mobile payments. The usual suspects are here – WiFi, Bluetooth v4.2, GPS, NFC, and a USB port – microUSB v2.0 on the S7 Edge and the newer Type-C reversible on the Pixel. 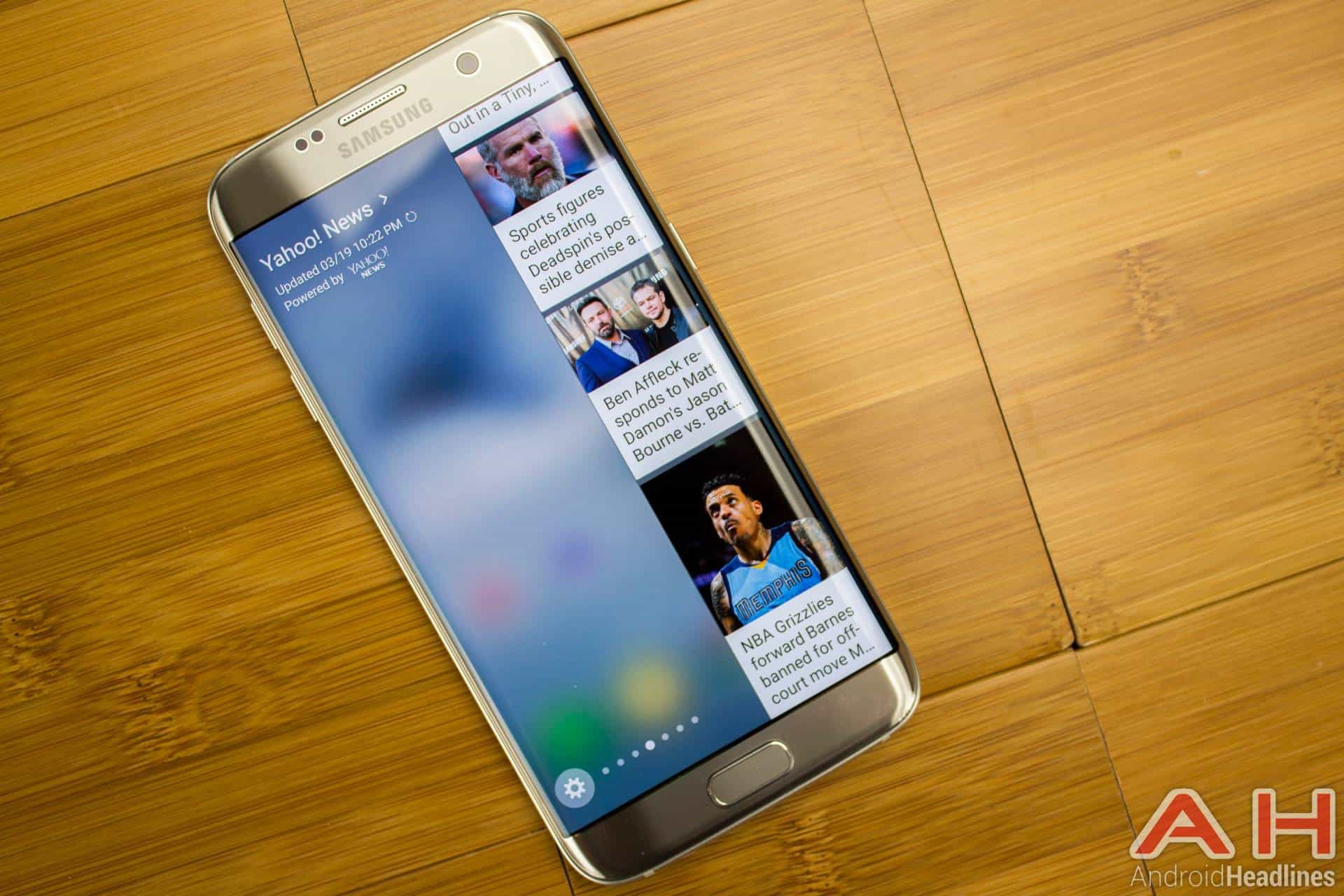 The Samsung Galaxy S7 Edge was released in April and would normally be just a sweet afterthought by now. Like every year, Samsung then releases its Galaxy Note and sales of it take off and carry Samsung through the holidays – but a funny thing happened on the way to this scenario…the Galaxy Note 7 was recalled and eventually banned from 2016. After the Note 7 recall, Samsung called the S7 and S7 Edge back into action with sales promotions and even made available the popular Blue Coral model. The Galaxy S7 Edge has the same metal and glass design updated a bit, and even the aged dual-curved screen still looks awesome. How does this aging premium smartphone hold up to the new Google Pixel? Let’s look and see just how they compare to one another.

Everybody was surprised that Samsung did not go larger (16MP – 21MP) for their primary camera. Instead, it turns out they went for a new Dual Pixel 12MP sensor for the primary camera with an increased aperture of f/1.7, included faster phase detection autofocus (PDAF), auto HDR, LED flash, and OIS. The S7 Edge went with a 5MP wide-angle lens with a larger f/1.7 aperture and Live HDR for its front-facing camera (FFC) for excellent low-light selfies and video chatting. Samsung increased the battery size to a larger, non-removable 3600mAh battery with Quick Charge 2.0 and quick wireless charging as well.

The Galaxy S7 Edge has an always-on display that lets you see your notifications at any time without having to turn on the primary display and this really helps to conserve battery life. The dual curved edges not only add beauty to the phone but they do provide some limited functionality with quick access to several features. Besides the standard Android Pay, you also have the option of using Samsung Pay, which does nothing but expand your mobile buying power. The Galaxy S7 Edge packs in a heart rate monitor, oxygen saturation sensor, quick wireless charging, and IP68 dust and water resistance. The S7 Edge measures 150.9 x 72.6 x 7.7 mm, weighs in at 157 grams and is available in Black, White, Gold, and Silver, costing about $790 – however, bargains and specials are everywhere. 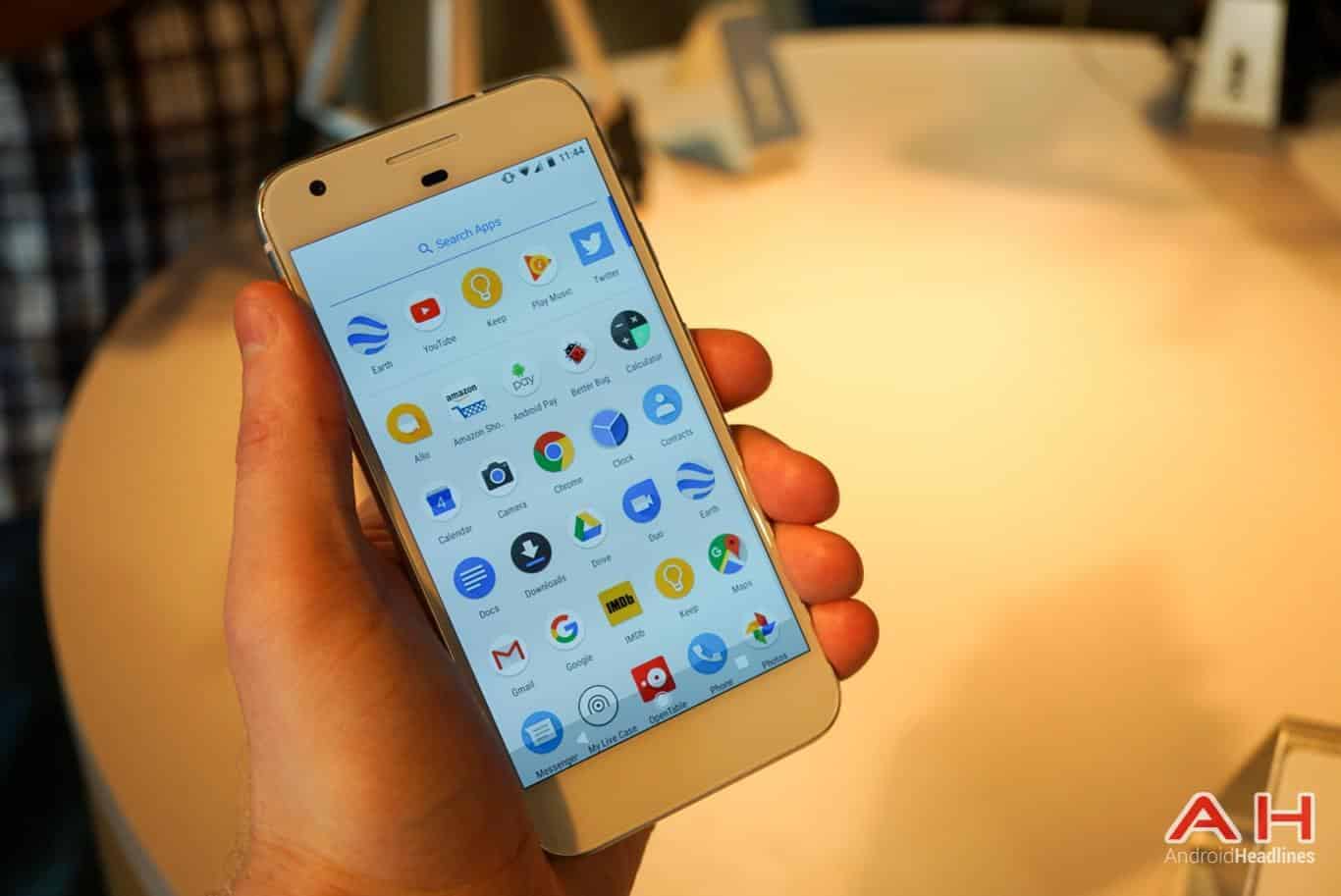 Google is looking to follow Apple by forming their own ecosystem. Just like Apple has iTunes and a slew of other ‘i’ devices, Google wants you to buy Google and depend on them for your every need. The new Google Pixel phone is one of the pieces of their puzzle, as is Google Home and Google Chromecast Ultra. By building hardware and software together, they can more quickly get their ecosystem going. You can use your Google Pixel phone with its incorporated Google Assistant to issue orders to your Google Home, and that, in turn, can control your HDTV with Chromecast Ultra attached. The new Pixel devices incorporate polished glass and metal as their backing and offer a great feel in your hand. Let’s see how this newly designed Pixel with its polished glass and metal construction holds up to the Samsung Galaxy S7 Edge.

The Google Pixel sports a 5.0-inch AMOLED display with only a Full HD resolution of 1920 x 1080 pixels and a respectable 441 PPI mostly due to the size of the display. It is using the newest 64-bit Qualcomm Snapdragon 821 quad-core processor, which is a revamp of the Snapdragon 820. Qualcomm claims it gives a 10-percent performance boost over the 820. It comes with a dual-core clocked at 1.6GHZ and a dual-core clocked at 2.15GHz. It uses an Adreno 530 for its graphic needs and packs 4GB of DDR4 RAM and either 32GB or 128GB of the faster UFS 2.0 memory with no means to expand. It uses a 2770mAh non-removable battery for power and has rapid charge capabilities.

Ever since the Nexus 6, Google started getting more serious about its cameras. This seriousness continued on the Nexus 6P and it really shows on their Pixel models. The specifications do not seem that impressive – 12.3MP sensor for their primary camera along with an aperture of f/2.0, phase detection autofocus (PDAF), and laser autofocus, a dual-tone LED flash, and no OIS – yet the Pixel camera was tested by DxOMark and received a score of 89 – the highest yet for a smartphone. Both Pixel devices use the same camera. There is an excellent 8MP FFC that comes with a f/2.0 aperture, a 1.4µm pixel size, and 1080p recording. This setup should offer excellent selfies and video chatting.

The polished glass and metal Pixel comes with a rear-mounted fingerprint sensor that will allow you to unlock your device or authorize mobile payments, including Android Pay. While not what we were hoping for, it does have at least a IP53 certification rating for splash and dust resistance. The Pixel will be running Android 7.1 Nougat out of the box and continue to receive the fastest updates from Google. The Google Pixel measures in at 143.8 x 69.5 x 8.5mm and weighs in at 143 grams. It comes in Quite Black, Very Silver, and Really Blue (limited edition color) and the 32GB Google Pixel will cost you about $650.

I know there are a lot of users that like the pure Vanilla Android experience and the fastest updates possible, and the Google Pixel will accommodate those users. However, a smartphone has to offer more than the fastest updates to be a complete device, and I think the Samsung Galaxy S7 Edge is about as complete as you can get and for that reason, I am calling it the winner of this comparison.

While the Galaxy S7 Edge costs more than the Google Pixel does, there are many promos going on making the S7 Edge much more affordable. While looks are not everything, the S7 Edge definitely wins in that department, and the curved edges add some functionality to the device. It has a larger display, higher resolution, and the ‘always-on’ feature saves battery life and is very convenient. It has cheap, expandable memory, offers Samsung Pay in addition to Android Pay, has the full IP68 certification for dust and water resistance, it offers quick wireless charging built-in, Hi-Res audio, a heart rate monitor, and an oxygen saturation sensor.

The Google Pixel is a great little phone with Android 7.1 Nougat and the fastest upgrades. It does have the Snapdragon 821 for a small boost in performance, and a camera rated 1-point higher than the S7 Edge. If having the pure vanilla Android is your thing, and you are satisfied with 32GB or 128GB of non-expandable memory and want to participate in the Google ecosystem, then, by all means, buy the Google Pixel.

Those are all nice things about the Google Pixel, but your money buys you a lot more with the Galaxy S7 Edge and that is why I am declaring it the winner of this comparison.