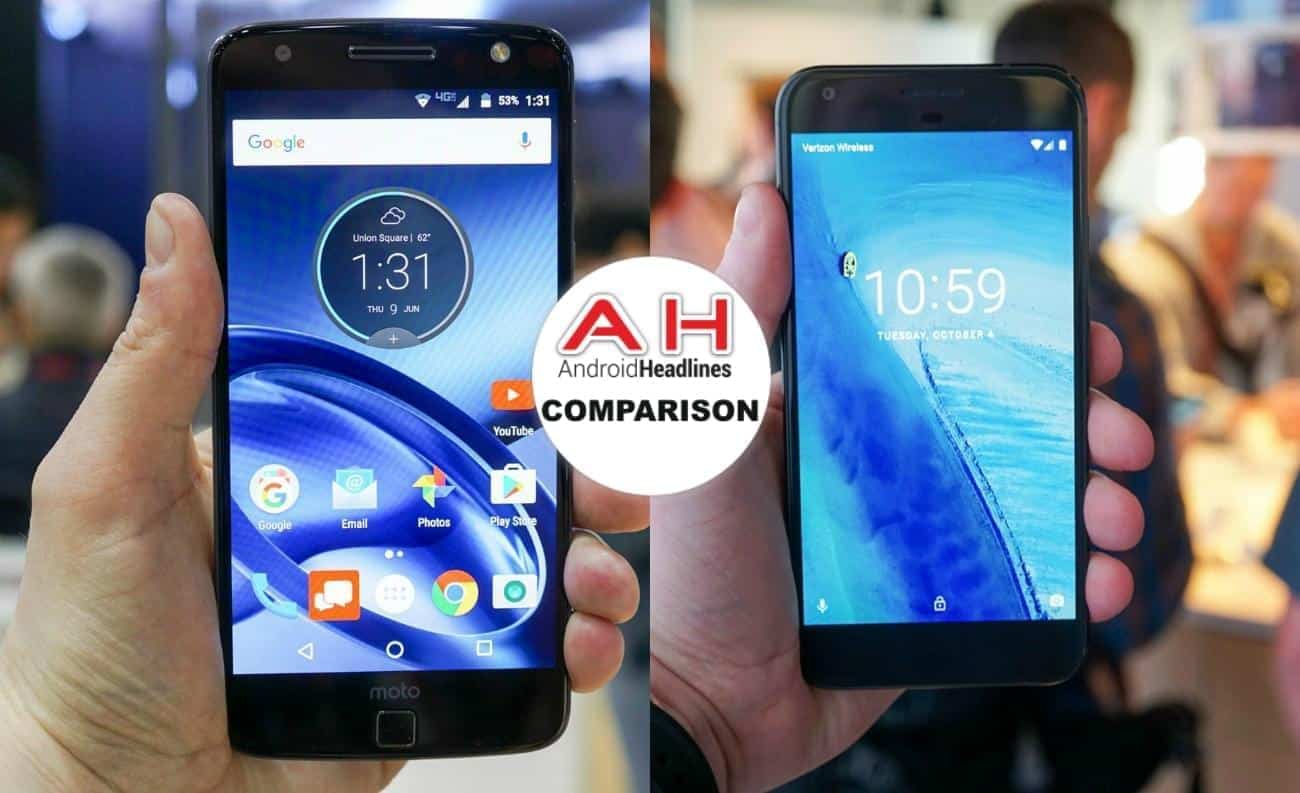 Do we have a good one for you today – The Lenovo Moto Z Force goes up against the new Google Pixel. The all-new metal Z Force with its Moto Mods takes on the newly polished glass and metal Pixel. Google replaced their much-loved Nexus series with a new Google Pixel and Pixel XL, although many loyal Nexus customers are not at all happy about it. It was evident that things started changing with the large Nexus 6 and then last year with the Nexus 5X and Nexus 6P. The Google Pixel series is the beginning of Google trying to start their own ecosystem – connecting their Smartphone to their Home products, so the user has total control. Both the Google Pixel and the Moto Z Force are receiving some very favorable reviews. Let’s look at just what these two devices have in common, if anything, and then we will take a closer look at each one in hopes that we can determine a winner of this comparison.

These two devices do have a few things in common, but we won’t find it in their size as their screens are one-half inches apart. Their displays both use an AMOLED technology, but different resolutions. To protect their screens from abuse, the Z Force uses their ShatterShield technology and the Google Pixel uses the Gorilla Glass 4. They both use a Snapdragon processor – 820 versus 821 – and they both use an Adreno 530 for their graphic needs. Both devices are packing 4GB of DDR4 RAM and 32GB of UFS 2.0 internal memory. The camera areas are both excellent, but they achieve those excellent results with different sized lens and electronics. They both use non-removable batteries and offer rapid charge capabilities. They both pack a fingerprint sensor for unlocking the device as well as authorizing mobile payments. They have the usual suspects – WiFi, Bluetooth (v4.1 on the Z Force and v4.2 on the Pixel,) GPS, NFC, And the Type-C reversible port for charging and data transfer.

The Moto Z Force has a Galaxy S7 Edge sort of pricing, but don’t let that scare you off. It has some great specs to back up the price. It comes with a large battery, exceptional QHD AMOLED display, the ShatterShield screen, a terrific camera, and the ability to add Moto Mods. The Moto Z Force is an all-metal design with a solid build, although the looks may take a while to grow on you. What is different and less intrusive about the Moto Mods versus the Modules used on the LG G5 is that the smartphone stays intact and the Moto Mods ‘snap’ onto the back with magnets and are helped to stay in place with the support of the protruding camera ring.

The Moto Z Force sports a 5.5-inch AMOLED QHD display with a resolution of 2560 x 1440 pixels and 535 pixels-per-inch (PPI.) Moto’s ShatterShield, improved from last year, is a 5-layer design that helps prevent breakage or shattering of the screen. Lenovo selected the Snapdragon 820 quad-core with dual cores clocked at 1.6GHz and dual cores clocked at 2.15GHz. It is coupled to an Adreno 530 GPU to handle the most demanding graphics. The Z Force packs 4GB of DDR4 RAM and offers 32GB of the faster UFS 2.0 internal memory that is expandable via a microSD card.

Lenovo worked on providing a great camera experience with the Z Force. The primary camera uses a 21MP sensor with a large aperture of f/1.8, laser and phase detection autofocus (PDAF), a dual-tone flash, and OIS. It uses a 5MP front-facing camera (FFC) with a f/2.2 aperture and even includes a LED flash for selfies and video chatting. The Moto Z Force uses a large 3500mAh non-removable battery but comes with a Turbo Charger, one of the fastest chargers available – it can charge the Moto Z Force battery up to 50-percent in only 20 minutes. You can also purchase a $99 Moto Mod that will increase the battery by 2200mAh and even adds wireless charging capabilities as well.

We would be remiss if we didn’t point out the fact that the Moto Z Force lacks a 3.5mm earphone jack. The Moto Z is so thin that they would have trouble fitting a jack in place, and while the Z-Force is wide enough to hand the jack, Lenovo decided to be consistent with both devices. An adapter (provided) plugs into the Type-C reversible port to accept earphones – it does produce a better sound, but you have to remember to carry around an adapter or look to purchase Bluetooth earphones. The other big difference is the Moto Zs can utilize Moto Mods that can add features to your device as well as customized covers for the back to help personalize its looks. We also need to remind you that the Z Force is a Verizon exclusive – part of the Droid series. It has a nano-coating for water resistance and is a shame they didn’t take it further and make it a sealed phone. It measures in at 155.9 x 75.8 x 7mm and weighs in at 163 grams. It comes in four colors – Black/Gray, Black/Rose Gold, Black/Gold, and White with pricing at $720 exclusively on Verizon. 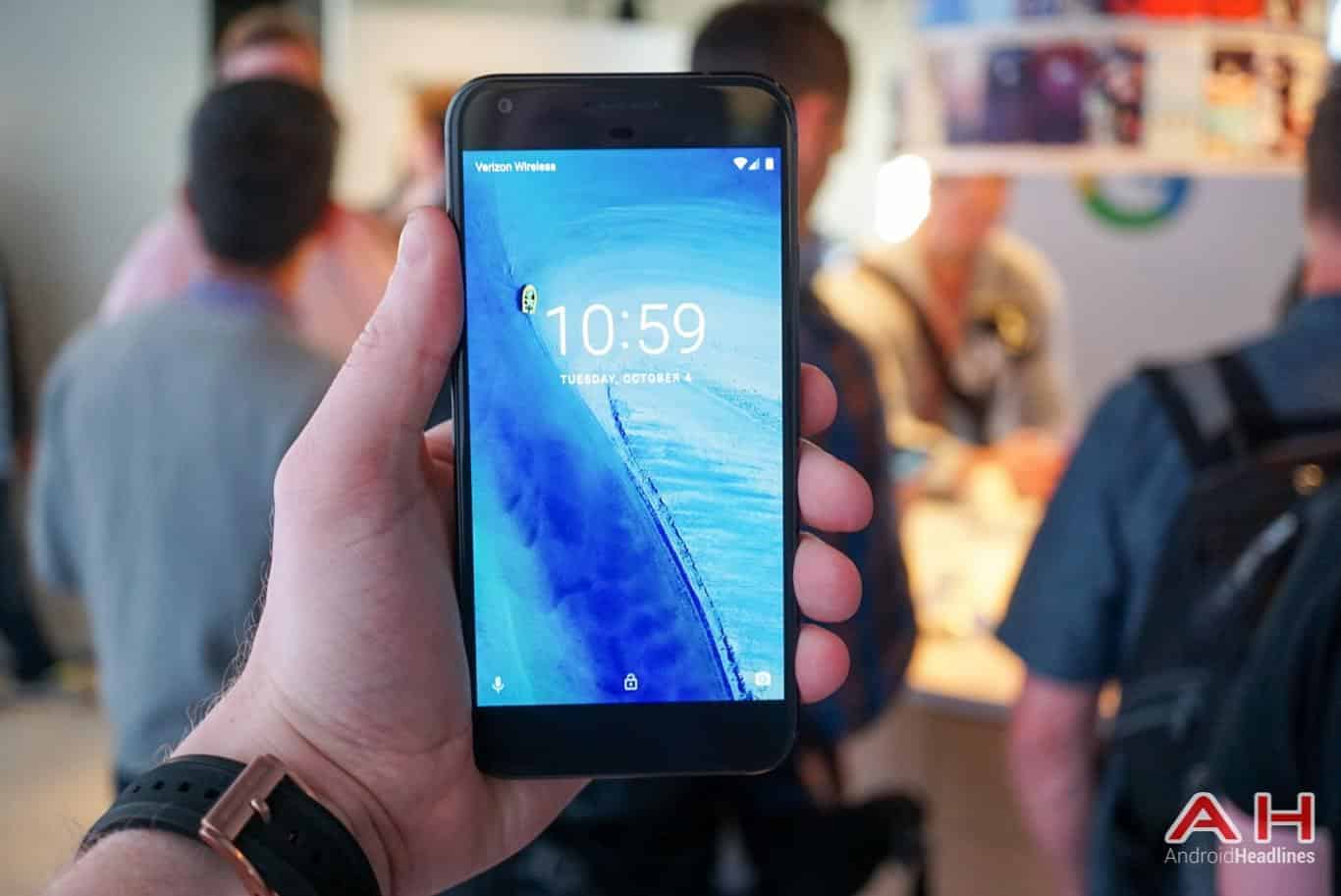 Google made some big changes this year by burying the Nexus name and starting fresh with their new Google Pixel and Pixel XL smartphones. Google is looking in Apple’s direction by forming their own ecosystem and getting buyers to depend only on Google products that interact with one another – the new Pixel phone is one of the pieces of their puzzle. By building hardware and software together, they can more quickly get their own ecosystem going. The new Pixel devices incorporate polished glass and metal and offer a great feel in your hand. Let’s see how this newly designed Pixel with its polished glass and metal construction holds up to the Moto Z Force design and specifications.

The Google Pixel sports a smaller 5.0-inch AMOLED display with only an FHD resolution of 1920 x 1080 pixels with 441 PPI. It is using the newest 64-bit Qualcomm Snapdragon 821 quad-core processor, which is supposed to give a 10-percent performance boost over the Snapdragon 820, with a dual-core clocked at 1.6GHZ and a dual-core clocked at 2.15GHz. It packs 4GB of DDR4 RAM and either 32GB or 128GB of faster UFS 2.0 memory with no means to expand. It uses a 2770mAh non-removable battery for power and has rapid charge capabilities.

Google has finally gotten serious about its cameras – not that the Nexus 6P was bad – but they went all out with their Pixel models. Even though the specifications do not seem that impressive, the Pixel camera was tested by DxOMark and received a score of 89 – the highest yet for a smartphone. The Pixel devices use a 12.3MP sensor for their primary camera along with an aperture of f/2.0, phase detection autofocus (PDAF), and laser autofocus, a dual-tone LED flash, and no OIS. There is a large 8MP FFC that comes with a f/2.0 aperture, a 1.4µm pixel size, and 1080p recording. This setup should offer excellent selfies and video chatting.

The Pixel will be running Android 7.1 Nougat out of the box. The Pixel comes with a rear-mounted fingerprint sensor that will allow you to unlock your device or authorize mobile payments, including Android Pay. It is IP53 rated splash and dust resistant. The Google Pixel measures in at 143.8 x 69.5 x 8.5mm and weighs in at 143 grams. It comes in Quite Black, Very Silver, and Really Blue (limited edition color) and the 32GB Google Pixel will cost you about $650.

You won’t get Android Nougat right away on the Moto Z Force, but you will get a larger and higher resolution display, expandable memory, nano-coated for water resistance, an excellent camera, bigger battery, faster-charging battery, and the ability to use Moto Mods. Because of this, I am picking the Moto Z Force as the winner of this comparison.

The Google Pixel is an excellent device but has a small, Full HD display rather than the QHD, a smaller battery, and no room to expandable memory. Other than the pure vanilla Android experience, I just do not see how the Pixel outclasses the many options the Moto Z Force offers, especially when you take into account Pixel’s selling price.