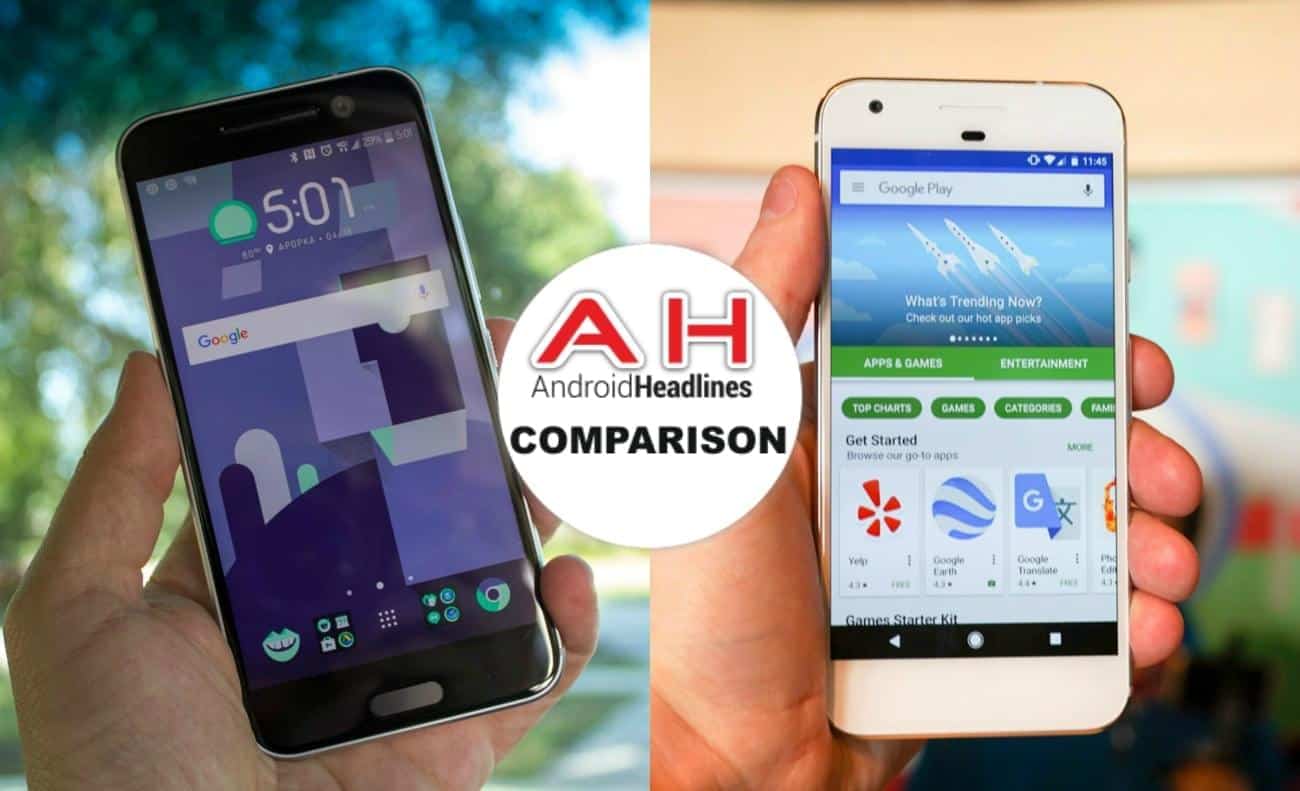 Do we have a good one for you today – the HTC 10 takes on the new Google Pixel. The HTC One M7 is where the all-metal smartphone started, and the HTC 10 is no exception. The Google Pixel series is also Google’s first step in replacing the old Nexus line-up. They went with a polished glass and metal backing, which many believe the looks will grow on you. Both devices are a solidly built and the battle of looks is probably won by the HTC 10. There are a few similarities between the two devices. Let’s take a look to see just what these two smartphones have in common and then we will take a closer look at each device.

These two flagships do have a few things in common, starting with their physical size with the HTC 10 just slightly larger and 18 grams heavier. Their displays are close in size – 5.2-inch on the HTC 10 and 5.0-inches on the Google Pixel – although they use a different technology and different resolutions. To protect their screens from abuse, the HTC 10 uses Gorilla Glass 3, and the Google Pixel uses the newer Gorilla Glass 4. They both use a 64-bit Snapdragon processor – HTC has the 820 versus the Google Pixel with the 821. They both use the Adreno 530 for their graphic needs. Both devices are packing 4GB of DDR4 RAM and have a 32GB variant of internal memory, although only the HTC has expandable memory. The primary camera areas are both terrific and even use the same number of megapixels. They both use non-removable batteries and offer rapid charge capabilities. They are both packing a fingerprint sensor for unlocking the device as well as authorizing mobile payments. They have the usual suspects – WiFi, Bluetooth v4.2, GPS, NFC, and the newer Type-C reversible port for charging and data transfer.

While HTC has put out some good-looking smartphones, they have always seemed to miss the mark other that excellent BoomSound of theirs. The HTC 10 is the best smartphone HTC has made to date and has everything we ask of a smartphone. The all-metal revolution they started a few years back got a little boring looking the past couple of years. With the HTC 10, they came out with a new bold design, with high-end specs, a QHD display, great sound, and a terrific camera. Let’s see just how well it stacks up to the new Google Pixel.

HTC seemed to fight the use of a QHD display but finally broke down this year as the HTC 10 sports a 5.2-inch Super LCD5 QHD display with a resolution of 2560 x 1440 pixels and a solid 565 pixels-per-inch (PPI.) HTC included the best processor they could find in the Qualcomm 64-bit Snapdragon 820 quad-core with dual cores clocked at 1.6 GHz and dual cores clocked at 2.15 GHz. It, like the Google Pixel, uses an Adreno 530 GPU to handle any graphics thrown its way. The HTC 10 is packing 4GB of the DDR4 RAM and 32GB of internal memory that is expandable to 256GB via a microSD card.

The camera area was always a great experiment with HTC but never getting it quite right until now. HTC finally has all of the right pieces and now takes great photos. It uses a 12MP sensor with its UltraPixel 2 that captures more light and image for better low-light shots. They added laser autofocus, a dual-tone LED flash, a large aperture of f/1.8 and OIS. HTC uses a 5MP sensor for the front-facing camera (FFC) with a large f/1.8 aperture, a wide-angle lens, and OIS. HTC went so far as to include an on-screen flash to ensure excellent low-light selfies and video chatting. Powering the device is a 3000mAh non-removable battery. It uses Qualcomm’s Quick Charge 3.0, which will give you up to a 50-percent charge in only 30 minutes.

While choosing to use a front-facing fingerprint sensor, HTC had to make some changes in their infamous BoomSound. They put the ‘low-end’ or woofer speaker on the bottom of the device and the high-end sounds now originate from the earpiece forcing HTC to rename it BoomSound Hi-Fi to show the distinction. HTC also included Hi-Fi circuitry for great sounding music for your earphones. The HTC 10 measures 145.9 x 71.9 x 9 mm and weighs in at 161 grams. It comes in Carbon Grey, Topaz Gold, and Glacier Silver and it will cost you about $650 with 32GB of memory, although some carriers are charging $199.99 for a two-year contract. 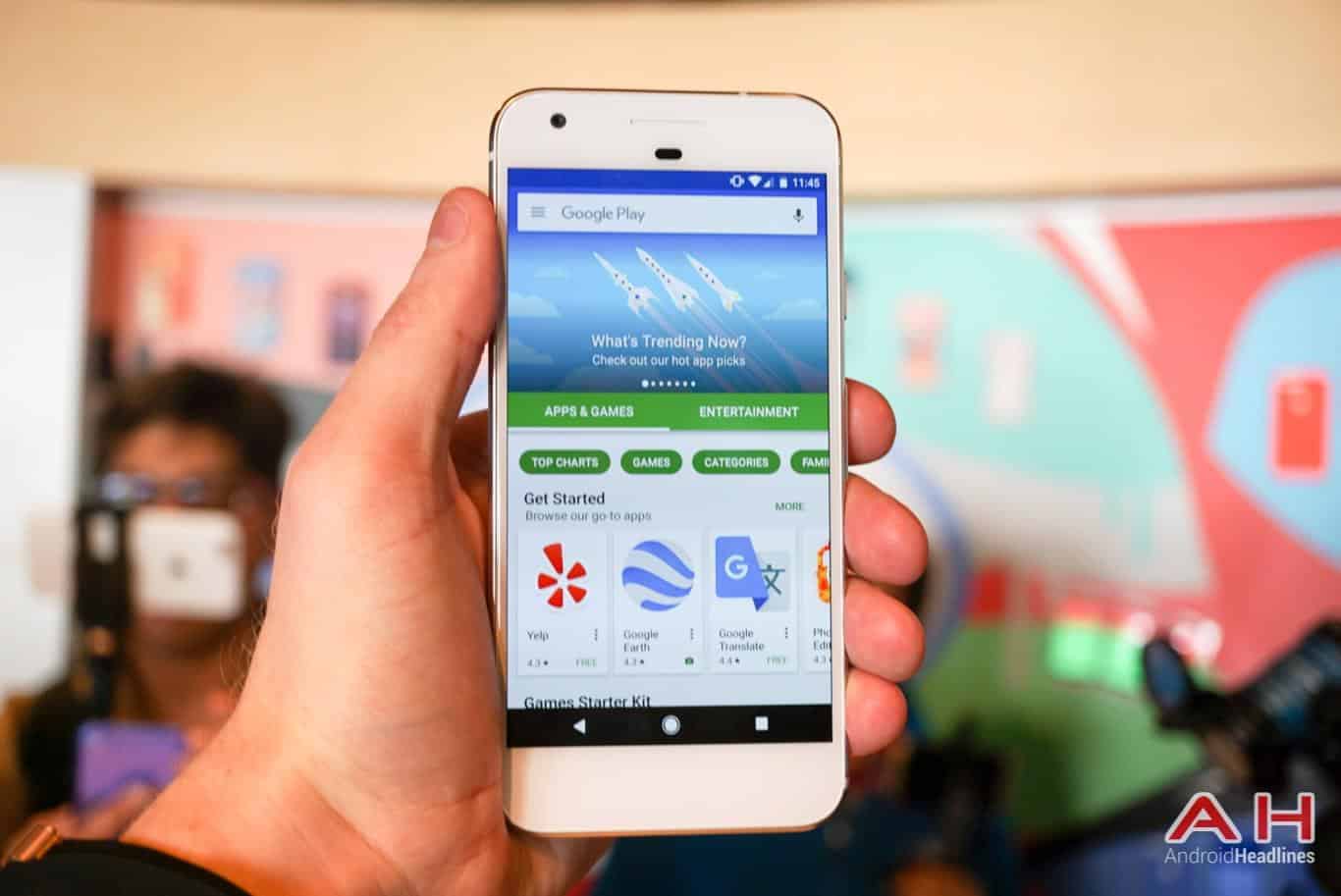 Google is looking in Apple’s direction by forming their own ecosystem and getting buyers to depend only on Google products that interact with one another – the new Google Pixel phone is one of the pieces of their puzzle. By building hardware and software together, they can more quickly get their ecosystem going. The new Pixel devices incorporate polished glass and metal and offer a great feel in your hand. Let’s see how this newly designed Pixel with its polished glass and metal construction holds up to the HTC 10 design and specifications.

The Google Pixel sports a smaller 5.0-inch AMOLED display with only an FHD resolution of 1920 x 1080 pixels and a respectable 441 PPI. It is using the newest 64-bit Qualcomm Snapdragon 821 quad-core processor, which is a revamp of the Snapdragon 820 and supposed to give a 10-percent performance boost. It comes with a dual-core clocked at 1.6GHZ and a dual-core clocked at 2.15GHz. It packs 4GB of DDR4 RAM and either 32GB or 128GB of the faster UFS 2.0 memory with no means to expand. It uses a 2770mAh non-removable battery for power and has rapid charge capabilities.

Google started getting more serious about its cameras on the Nexus 6 and then again, on the Nexus 6P – but they went all out with their Pixel models. The specifications do not seem that impressive yet the Pixel camera was tested by DxOMark and received a score of 89 – the highest yet for a smartphone. Both Pixel devices use a 12.3MP sensor for their primary camera along with an aperture of f/2.0, phase detection autofocus (PDAF), and laser autofocus, a dual-tone LED flash, and no OIS. There is an excellent 8MP FFC that comes with a f/2.0 aperture, a 1.4µm pixel size, and 1080p recording. This setup should offer excellent selfies and video chatting.

The Pixel comes with a rear-mounted fingerprint sensor that will allow you to unlock your device or authorize mobile payments, including Android Pay. It is IP53 rated splash and dust resistant. The Pixel will be running Android 7.1 Nougat out of the box and continue to receive the fastest updates from Google. The Google Pixel measures in at 143.8 x 69.5 x 8.5mm and weighs in at 143 grams. It comes in Quite Black, Very Silver, and Really Blue (limited edition color) and the 32GB Google Pixel will cost you about $650. 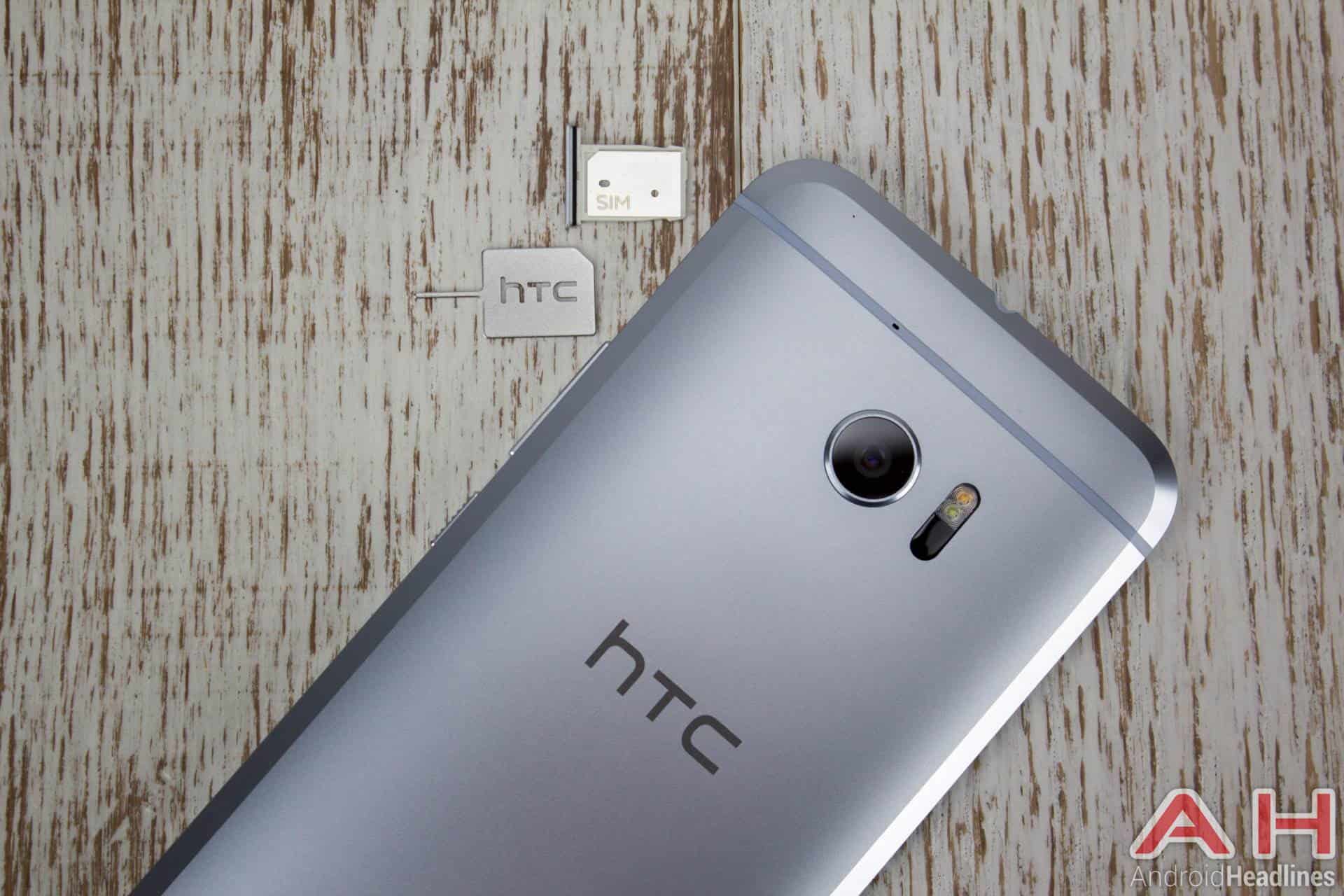 I have to pick the HTC 10 as the winner of this comparison. It is a great looking phone, has a QHD resolution, basically the same processor, the same GPU, better sound, excellent camera, screen flash, Hi-Res audio, and expandable storage. You get all of that for less than the price of the Google Pixel.

The Google Pixel does have an AMOLED display but is smaller and with less resolution. It has a slightly faster processor, some splash resistance, an excellent camera, but no room for memory expansion. It does come with 7.1 Nougat and will receive faster upgrades. It also ties in with Google’s ecosystem they are trying to build.

You have to make a decision on what it is most important to you in your smartphone. Do you want to pay the price for the pure vanilla experience of Android, but give up a few other specifications or do you want more features and expandable memory and pay less money?