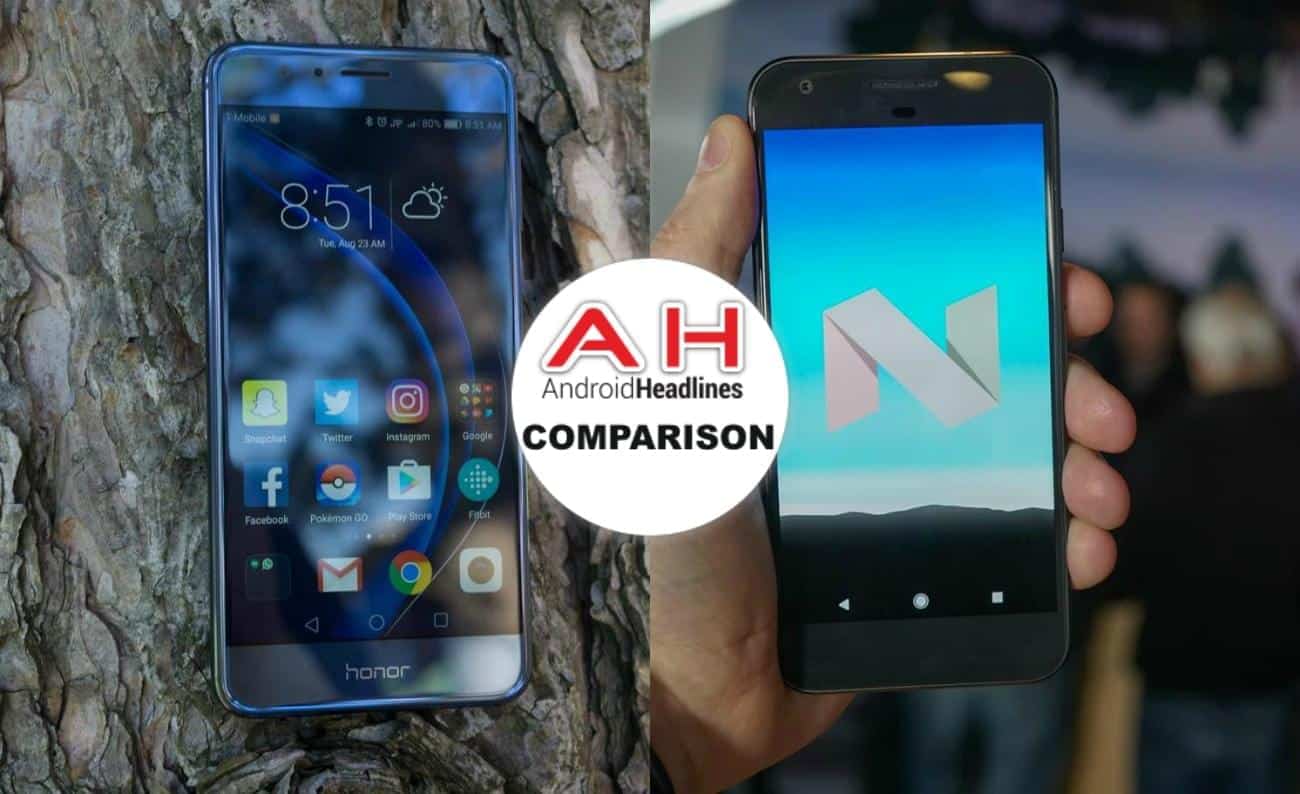 Do we have a good one for you today – the Honor 8 takes on the new Google Pixel. The Honor 8 is an all glass design with a metal frame holding everything together while the Pixel uses polished glass and metal on the back of the device. Both devices come in a brilliant blue color and are very striking in looks, although the Honor 8 would probably win the fashion contest. Both devices are rock solid in build quality and comfortable to hold. Let’s look at just what these two devices have in common, if anything, and then we will take a closer look at each one in hopes that we can determine a winner of this comparison.

The Honor 8 and the Google Pixel do have a few things in common. Because the displays are close in size so are the physical dimensions, although the slightly larger Honor 8 does weight in 10 grams heavier. The displays use a different technology and size, but they are both using only the Full HD resolution. Both devices use an advanced processor but are different brands with different GPUs for graphics. They both have a 32GB variant, but only the Honor 8 has expandable memory – you must purchase the 128GB Google Pixel for more memory. Both have excellent camera areas with the same megapixels, but the Honor 8 uses dual cameras. They both use an 8MP front-facing camera (FFC) for selfies and video chatting. Both incorporate a fingerprint sensor for unlocking the device as well as authorizing mobile payments. They both are equipped with a non-removable battery with rapid charge features. They have the usual suspects – WiFi, Bluetooth v4.2, GPS, NFC, and Type-C reversible port for charging and data transfer. 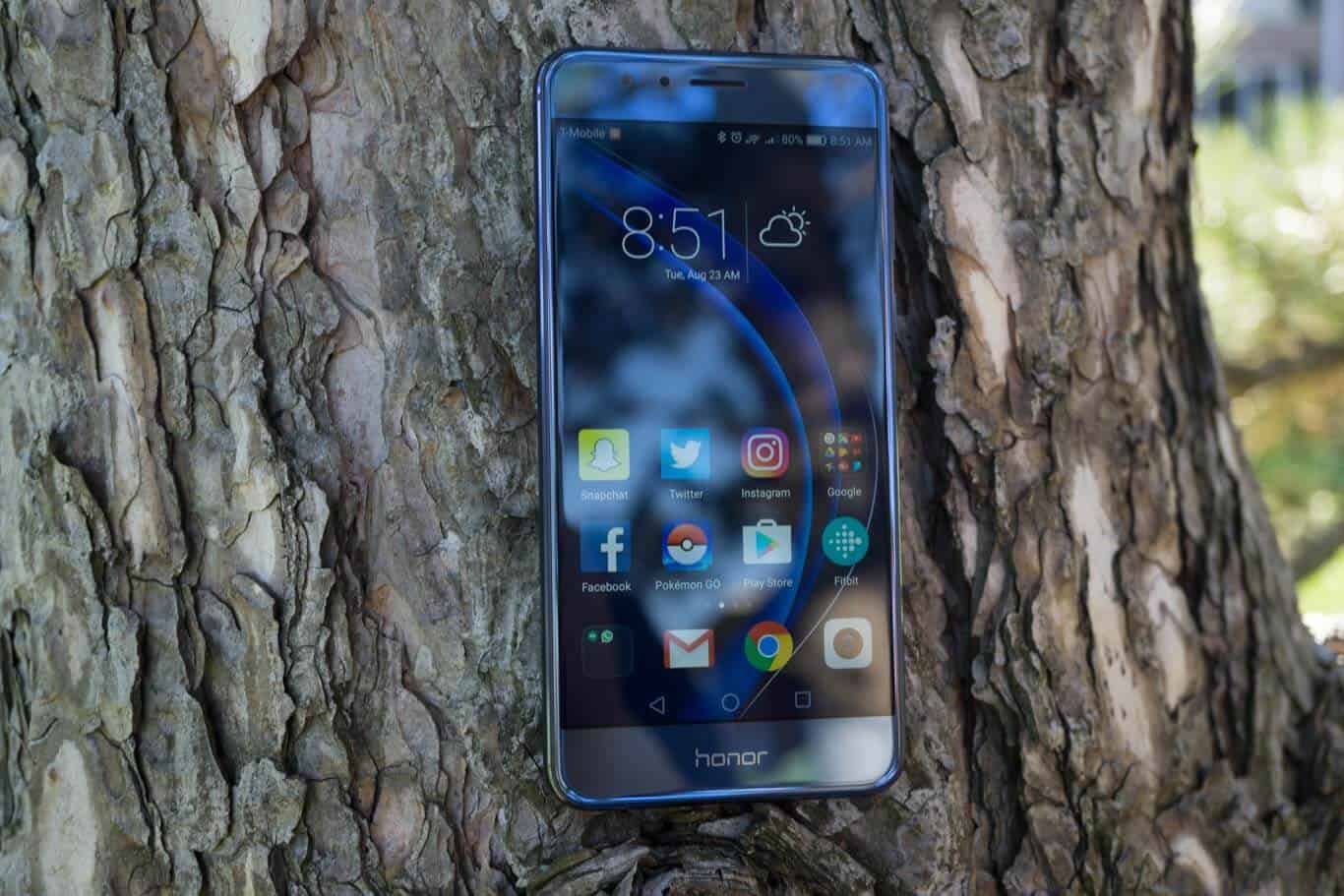 Huawei is growing in popularity in the smartphone community, especially after it was commissioned to build the Nexus 6P. They released the popular Honor 5X earlier this year, and the Honor 8 is its replacement. In Huawei’s continual pursuit of going after the online shopping millennial market, you can only purchase the Honor 8 online, through Best Buy or B&H Photo’s website. The Honor 8 is a real beauty and a flagship in design and specifications. It has glass on the front and the back of the device with a metal frame holding it all together. It comes with a 5.2-inch display – the old sweet spot for smartphones. Just how does this $400 flagship stand up to the $650 Google Pixel?

The Honor 8 sports a 5.2-inch IPS LCD Full HD display with a resolution of 1920 x 1080 pixels and 423 pixels-per-inch (PPI.) Huawei decided to go with their HiSilicon Kirin 950 octa-core processor with one quad-core clocked at 1.8GHz and another quad-core clocked at 2.3GHz. It is paired with an excellent Mali-T880 MP4 GPU for graphics. It packs 4GB of DDR4 RAM and 32GB of expandable internal storage.

Huawei decided to use a dual camera on the Honor 8, and it consists of two 12MP sensors with laser autofocus, a dual-toned LED flash, and an aperture of f/2.2. According to our review, it takes excellent pictures. The FFC is a large 8MP with a f/2.4 aperture for taking selfies and video chatting. It also packs a larger 3000mAh non-removable battery that uses their Smart Power 4.0 fast battery charging to give you a 47-percent charge in 30 minutes.

The Honor 8 has a few extra features not found on the Pixel. The fingerprint sensor can act as a Smart Key that is programmable to open an app or turn on your flashlight, among other things with an extra push. The Honor 8 also packs DTS sound for better listening through your earphones. It is running Android 6.0.1 Marshmallow with Huawei’s Emotion UI 4.1 over the top – according to our review could use a little work. The Honor 8 measures 145.5 x 71 x 7.5mm, weighs in at 153 grams and comes in Pearl White, Midnight Black, Sapphire Blue, and Gold, will cost you about $400 online, and is an excellent value for the features and build.

The new Google Pixel phone is one of the pieces of Google’s new ecosystem puzzle, as is Google Home and Google Chromecast Ultra. By having more control over the building of hardware and software together, Google can more quickly get their ecosystem going. You can use your Google Pixel phone that has Google Assistant built-in to issue orders to your Google Home, and that, in turn, can control your HDTV with a Chromecast Ultra attached. As more IoT (Internet of Things) take off in our home, the Google Assistant could potentially be used to adjust your thermostat, unlock your front door, or open your garage door. The new Pixel devices incorporate polished glass and metal as their backing and offer a great feel in your hand. Let’s see how this newly designed Pixel with its polished glass and metal construction holds up to the Honor 8.

The Google Pixel sports a 5.0-inch AMOLED display with only a Full HD resolution of 1920 x 1080 pixels and a respectable 441 PPI mostly due to the size of the display. While it is only an FHD display, it is an AMOLED display that should ‘pop’ with contrasts. It is using the newest 64-bit Qualcomm Snapdragon 821 quad-core processor, which is a revised example of the Snapdragon 820. According to Qualcomm, it gives a 10-percent performance boost over the original 820. It comes with a dual-core clocked at 1.6GHZ and a dual-core clocked at 2.15GHz. It uses an Adreno 530 for serious graphic needs and packs 4GB of DDR4 RAM and either 32GB or 128GB of the faster UFS 2.0 memory with no means to expand. It uses a 2770mAh non-removable battery for power and has rapid charge capabilities.

Google started getting more serious about its cameras on the Nexus 6 model. This striving for excellence continued on the Nexus 6P and it really shows on their Pixel models. What is amazing is that the specifications do not seem that impressive with a 12.3MP sensor for their primary camera. They added an aperture of f/2.0, phase detection autofocus (PDAF), and laser autofocus, a dual-tone LED flash, and no OIS – yet when DxOMark tested the Pixel camera, it received a score of 89 – the highest yet for a smartphone camera. There is an excellent 8MP FFC that comes with a f/2.0 aperture, a 1.4µm pixel size, and 1080p recording. This setup should offer great selfies and video chatting.

The unusual combination of polished glass and metal on the back of the Pixel is where you will find a rear-mounted fingerprint sensor that will allow you to unlock your device or authorize mobile payments, including Android Pay. The Pixel does have at least an IP53 certification rating for splash and dust resistance, but an IP68 rating would be a better choice. The Pixel will be running Android 7.1 Nougat out of the box and continue to receive the fastest updates from Google. The Google Pixel measures in at 143.8 x 69.5 x 8.5mm and weighs in at 143 grams. It comes in Quite Black, Very Silver, and Really Blue (limited edition color) and the 32GB Google Pixel will cost you about $650. 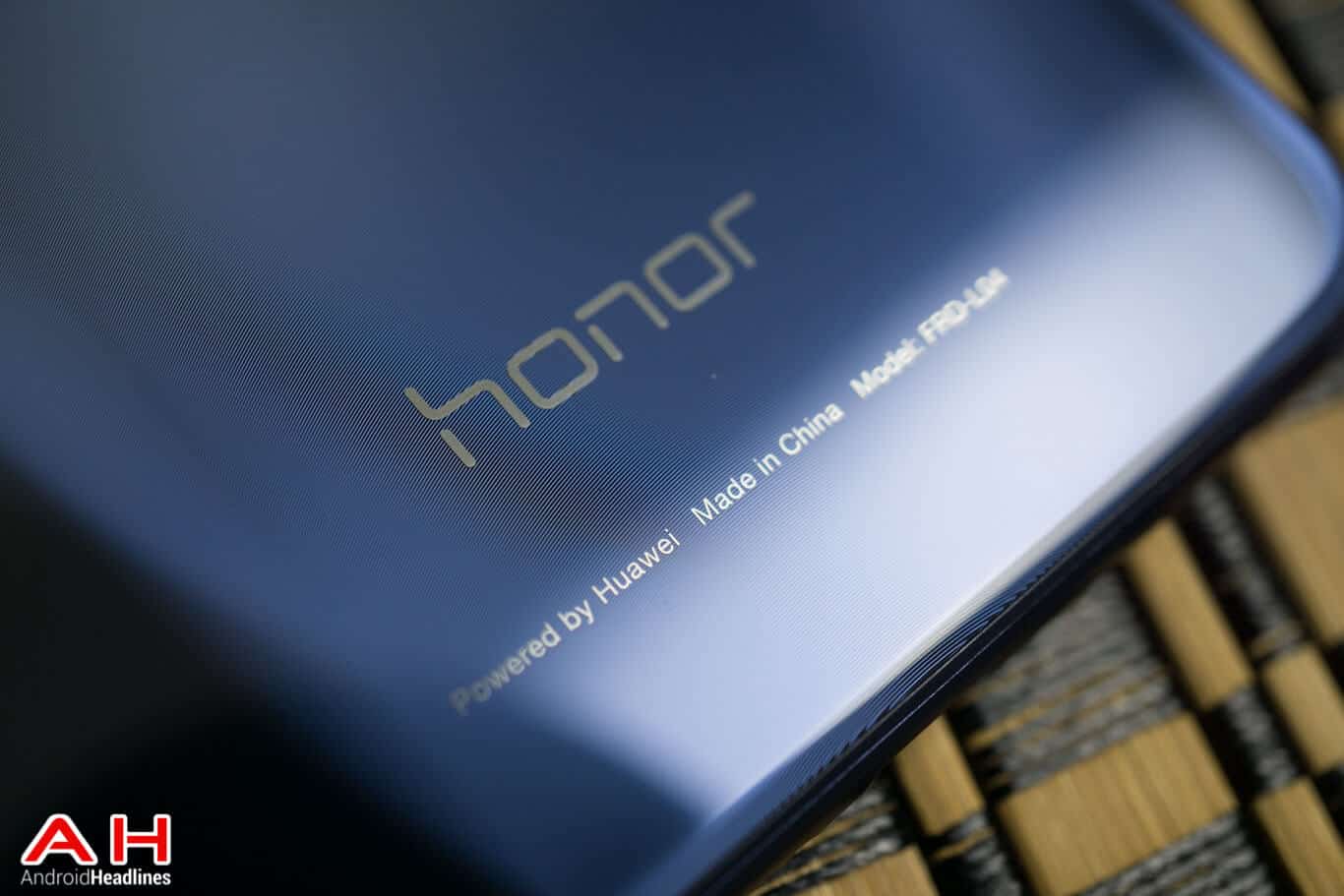 Let me set the record straight before the Pixel people have a migraine over my selection. I am not happy with the fact that the Honor 8 only works on GSM networks like AT&T and T-Mobile, but for $400, it is just too good a value to pass up when you consider the Google Pixel costs $650.

The Honor 8 has a slightly larger display, the same sort of processing power and GPU, dual cameras that take great pictures, the same size FFCs, the same amount of RAM, it adds expandable memory, has DTS sound, and a larger battery that uses Smart Power 4.0.

The Google Pixel does have splash water resistance, arrives with Android 7.1 Nougat, and will receive the fastest updates possible. The Pixel will also tie into Google’s ecosystem with Google Assistant built into the device.

You have to decide which features you cherish the most and if they are worth the extra $250. With so many specifications the same or exceeding the Pixel’s for only $400, I picked the Honor 8 as the winner of this comparison.