With the rumoured OnePlus 3T launch just around the corner, an unknown device going by the name ‘OnePlus Pixel’ has just appeared on Geekbench. According to the benchmark site, the unknown device features a Snapdragon 820 on the inside, running at 1.59 GHz. As well as this, 6GB of RAM were also present inside the device and the device comes running the latest version of Android, version 7.1 (Nougat). Now, looking at these specs, this device doesn’t appear to be the expected OnePlus 3T due to the fact that this device is expected to feature Qualcomm’s new Snapdragon 821 on the inside, so it could simply be OnePlus testing out an Android 7.1 update, either for the OnePlus 3T or even the OnePlus 3.

Either way, the rumoured OnePlus 3T is expected to remain largely similar to the original OnePlus 3. Aside from the previously mentioned processor update, only two other details are expected to change, at least on the inside. The first is a larger 3,300 mAh battery, something that should please many customers as it represents an increase over the OnePlus 3’s 3,000 mAh battery. As well as this, OnePlus is expected to swap the camera sensor out for a new one of the same resolution, the difference being that the new sensor offers a larger f/1.7 aperture, on par with the Galaxy S7 Edge and something that should help capture much better low-light photos. Regarding the display, some rumors point towards OnePlus moving back to an LCD display, something that may disappoint a number of customers and would actually go back on OnePlus founder Carl Pei’s word after he stated the company had no plans to move away from Optic AMOLED displays. Either way, though, the switch is rumored to be due to a shortage in Optic AMOLED displays, meaning that, if the switch does happen, it’s likely not a preference choice on behalf of the company.

Regardless of what specs the device turns out to have, an announcement is expected to happen on November 15 and the device is expected to cost around $480, which would represent an increase of $80 over the OnePlus 3. On a final note, back to the OnePlus Pixel that passed through Geekbench. If the device is in fact simply testing out the Android 7.1 update, it would be safe to assume that the OnePlus 3T could launch with the new software on board and the update may even start rolling out to existing OnePlus 3 users soon after. 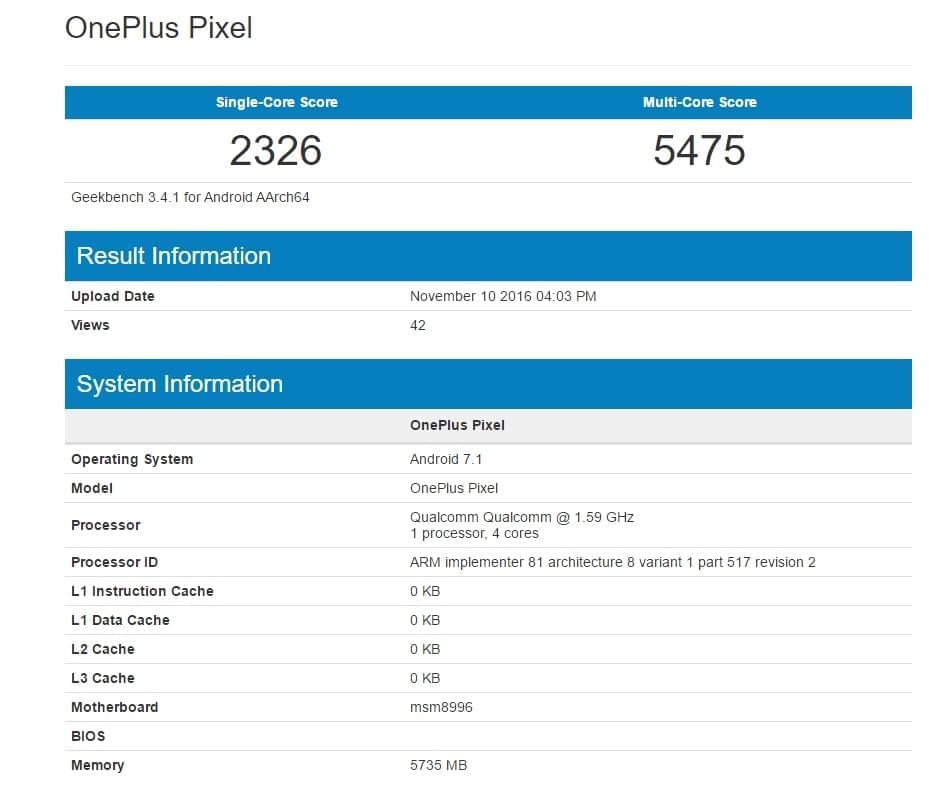