Skip to content
Advertisement
Trusted By Millions
Independent, Expert Android News You Can Trust, Since 2010
Publishing More Android Than Anyone Else
20
Today
167
This Week
918
This Month
3902
This Year
121507
All Time
Advertisement Netflix has been around for a good long time now, and has been the driving force behind the idea of “cord cutting” since its streaming service gained legs. In the past couple of years, the service has made as impossible as they can do to make it impossible to get rid of the service thanks to original shows like House of Cards and more recently, The Crown. For a lot of people, their primary way of watching Netflix is probably tuning in from a phone or from a tablet, especially if these users are watching their favorite shows on the move. Now, after speculation surrounding the feature Netflix is finally adding offline playback to their mobile apps via downloading.

As a press release from Netflix themselves states, this new feature will be available on both Android as well as iOS, and will be available to all plans, too. For a lot of people, being able to download videos to watch on the move is something they’ve been asking Netflix for for a long time, not only does it save on data, but it also speeds things up and ensures the best quality. If you’re watching something on the train or on the bus to work, it’s likely that your signal will yo-yo from being great to not being there at all in some cases. As such, it’s good to hear that Netflix is finally making changes for the better, and that people will be able to make the most of fast WiFi at home, as well as the ample storage on their phone. Whether or not Netflix have taken into account microSD card storage here is unclear, but given that the below screenshot from the press release appears to be of the Google Pixel, which doesn’t have a microSD card slot, this might not be part of Netflix’s plan for the moment.

As of writing, it’s unclear which version of the Netflix app has this new feature rolled into it, and the press release only advises users to “update your Netflix app to the most recent version” so it’s likely the update is currently making its way to the Play Store to go live any moment. 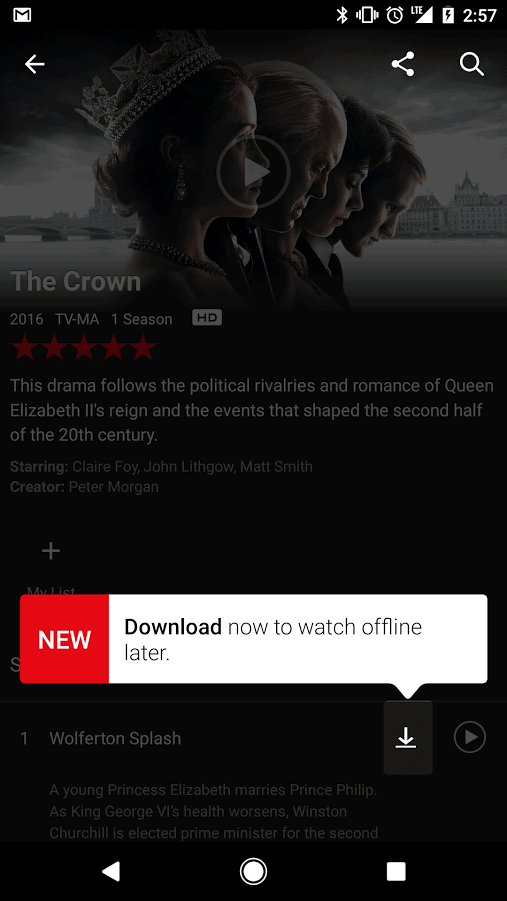