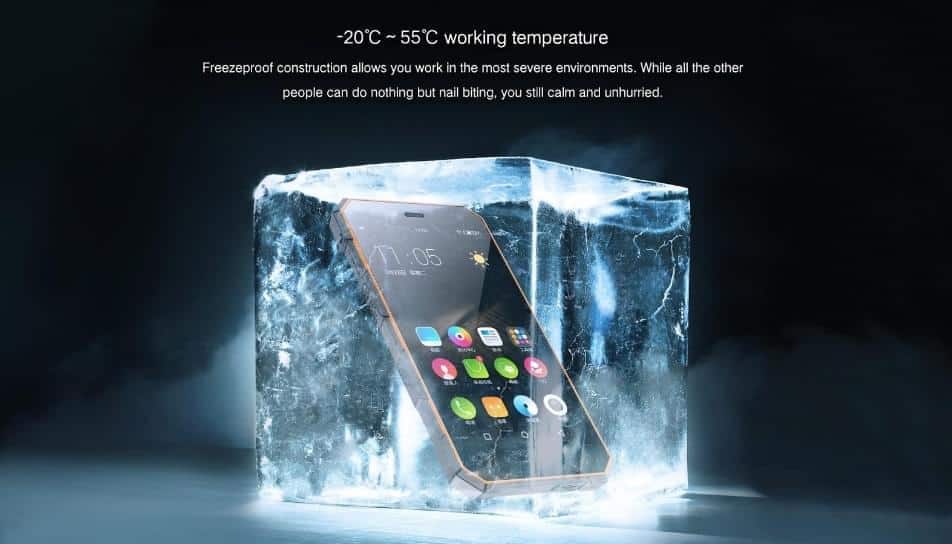 NOMU's latest S-range of smartphones is comprised of the NOMU S10, the S20 and the S30. Besides their other main selling features, one of their durability selling points is that they can still operate in temperatures as low as -20-degrees and as high as 55-degrees. You can see a prime example of this being one of their selling points in the promotional image above. But how accurate is that claim and can the NOMU S-range really survive in such extreme temperatures? Well, the company has now put together a video to test whether the NOMU S series of smartphones and their IP68 certification can indeed survive such harsh temperatures.

In the video, the three S-range devices have all been frozen in a big cake of ice and have remained there frozen for one and a half days (36 hours). At the end of the test and once the ice was broken up, the video does show the phones being taken out of the ice and low and behold, still working fine. You can see the video in full below for yourself.

As mentioned, the IP68 rating is only one of their selling points and the three phones do pack in some decent specs for the price. The NOMU S10 is a smartphone which comes with a 5-inch HD IPS display, 2GB RAM, 16GB internal storage and is powered by a MediaTek MTK6737T processor. That is in addition to the 8-megapixel rear camera and the 5,000 mAh battery. Moving on and the NOMU S20 is also a device which boasts a 5-inch display, a 8-megapixel rear camera and the same MediaTek MTK6737T processor. However the RAM has been boosted up to 3GB and the internal storage is boosted up to 32GB, while the battery comes in at 3,000 mAh. Last but not least, the NOMU S30 is a larger device and makes use of a 5.5-inch display with a 1080p resolution. Inside, this one comes packing 4GB RAM, 64GB internal storage and is powered by a MediaTek Helio P10 octa-core processor. Cameras include a 13-megapixel rear camera along with a 5-megapixel front-facing camera. While the battery is a 5,000 mAh battery, which also supports Pump Express Plus fast charging.

If the NOMU S-range is of interest to you, then it is worth knowing that on November 11, there will be a promotion for the NOMU S20. During the promotion, any NOMU S20 purchases made through AliExpress will see a saving of at least $20. You can check out that promotion or order one by heading through the link below.

On a last note, CM 13 OS (based on Android 6.0) for the Nomu S30 is apparently almost ready for device owners to use and will be released soon. You can see some images of how CM 13 OS will look in the gallery below or find out more about the update and NOMU by checking out NOMU's website and their Facebook page.

Advertisement
NOMU Website NOMU on Facebook
Advertisement
Trusted By Millions
Independent, Expert Android News You Can Trust, Since 2010
Publishing More Android Than Anyone Else
29
Today
186
This Week
106
This Month
4093
This Year
105570
All Time
Advertisement