Samsung may be the largest Android smartphone manufacturer by far, but the company has often been criticized for launching too many models at similar price points with very little difference between them. While more choice is almost always a good thing from the consumer point of view, it can get a little confusing for buyers at times because of the bewildering array of devices available in the market today. Even though Samsung had earlier announced its intention to reduce its smartphone portfolio and concentrate only on strategic devices, the company this year launched an all-new lineup that has so far been restricted to the Chinese market for the most part. Marketed as the Galaxy C-series, the lineup is growing in size rapidly and already consists of products like the Galaxy C5, Galaxy C7 and the recently-launched Galaxy C9 Pro.

Rumors now suggest that the company is all set to launch a new Galaxy C-series device that may very well be called the Galaxy C7 Pro if the company’s naming convention for other Galaxy C-series devices is anything to go by. The device in question was recently listed on Geekbench under model number SM-C7010, which is a step-up from the SM-C7000 that the Galaxy C7 comes with. The listing gives us a sneak peek into some of its key hardware specs, which tells us that the processor and the amount of RAM on the newly-listed device apparently remain unchanged from the original Galaxy C7 that was announced earlier this year.

As per the listing, the upcoming gadget will be powered by the Snapdragon 625 MSM8953 SoC and have 4GB of RAM, which are exactly what the Galaxy C7 brings to the table. With a single-core score of 1,000 and multi-core benchmark of 5,679, the phone’s overall performance does seem to be slightly higher than the Galaxy C7 (SM-C7000), but it will be interesting to see how much difference this will make in terms of real-life performance. The device was recently imported into India for testing with import prices averaging around $199 per unit, so it looks like it won’t take Samsung too long to launch its upcoming mid-anger in the market. 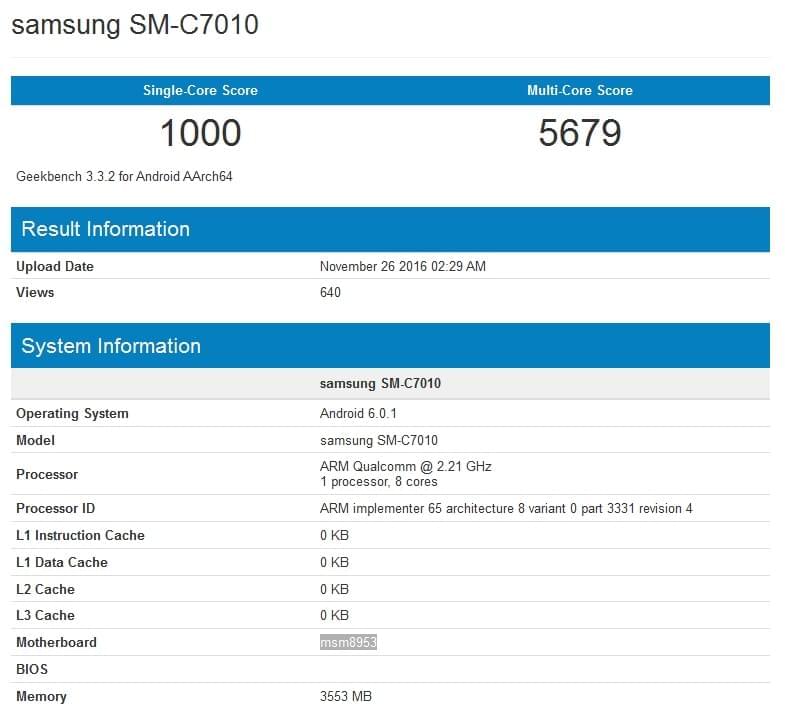