Just a few short years ago, buying a mobile phone from a third party rather than from a wireless provider was quite uncommon. Nobody wanted to pay the full retail value for an expensive smartphone when the cost of ownership was already factored into their monthly plan, which lowered the upfront cost when purchasing a device through the carrier. But times have changed. Now, many carriers have separated the cost of the device from the cost of service, giving users the option to either finance a device through them. or reduce their monthly bill by purchasing the device separately.

Buying a smartphone directly from the manufacturer has some advantages; often, these devices will not be locked to a specific carrier, and will not be preloaded with carrier bloatware. Still, the financing option may be more appealing to many consumers because it means less money at the time of purchase. Fortunately, in recent years, some manufacturers have started to offer financing options of their own. Motorola, for example, introduced the Moto Credit program to help split the cost of device ownership into monthly payments. Unfortunately for those who planned to use the financing service for future purchases, however, Moto Credit is being discontinued shortly. Comenity Capital Bank, the bank that has partnered with Motorola to issue customers credit has started sending letters to customers informing them that after November 29, 2016, they will no longer be able to make Moto Credit purchases, and their accounts will be closed. The company has also halted the creation of new accounts, so those who don’t already use Moto Credit won’t be able to use it from this point forward. Accounts with existing purchases will remain open and account holders will continue to be billed on the normal schedule until the items in question are paid off.

While this change means you won’t be able to finance a device directly through Motorola, there are still other options to make the cost of a new smartphone more manageable. Some people purchase a phone using a credit card and make monthly payments until the phone is paid off. Some retailers, such as Best Buy, also offer their own device financing options. And if you don’t have your mind made up to get a Lenovo Moto device, the Google Pixel and Pixel XL, Google’s new smartphones with a plethora of impressive software features, can be purchased directly from Google with 24-month financing for about the same monthly cost as Verizon. So although the discontinuation of Moto Credit may make it more difficult for customers to afford a Lenovo Moto device, there are still plenty of great options to choose from with affordable financing plans. 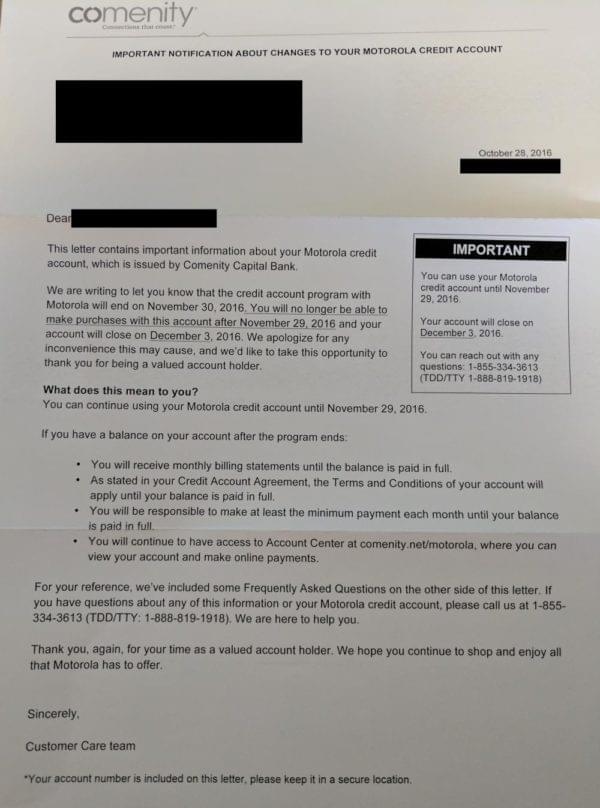