As many of you know, Meizu had introduced quite a few phones this year, and a number of those are extremely affordable devices like the Meizu M3 and Meizu M3s. Now, the company had also introduced the Meizu M5 at the end of last month, which is a phone made out of polycarbonate which comes in a number of color options and is quite affordable at the same time. The device comes with 3GB of RAM, MediaTek’s MT6750 SoC, 720p display, etc. This handset can be compared to the Meizu M3, for sure. Now, some of you probably know that Meizu introduced the Meizu M3 Note earlier this year as well, which is essentially a larger, and more powerful variant of the Meizu M3. Well, it seems like the Meizu M5 will also get a ‘Note’ counterpart, read on.

The Meizu M5 Note surfaced on Geekbench yesterday, revealing its Helio P10 64-bit octa-core processor, 3GB of RAM and the fact that it will ship with Android 6.0 Marshmallow out of the box, along with Meizu’s Flyme UI on top of it. Well, the device has just landed on AnTuTu as well, and we do get some more spec info thanks to this listing. AnTuTu confirms that the device will ship with Helio P10, 3GB of RAM and Android 6.0 Marshmallow, and in addition to that, it reveals that we can expect to see a fullHD (1920 x 1080) display here, and even though it does not mention how big that display will be, we do think that the Meizu M5 Note will ship with a 5.5-inch panel. In addition to all that, AnTuTu says that the phone will sport a 5-megapixel selfie shooter, and 32GB of internal storage.

Now, considering the fact that the Meizu M5 is made out of polycarbonate, we do expect the same to happen with the Meizu M5 Note. This smartphone will, almost certainly, ship in a number of color variants, just like its smaller sibling. We still do not know when the phone will launch, but you can expect it to sport a physical home key below the display (Meizu’s so-called mBack key), and a fingerprint scanner will probably be a part of this package as well. 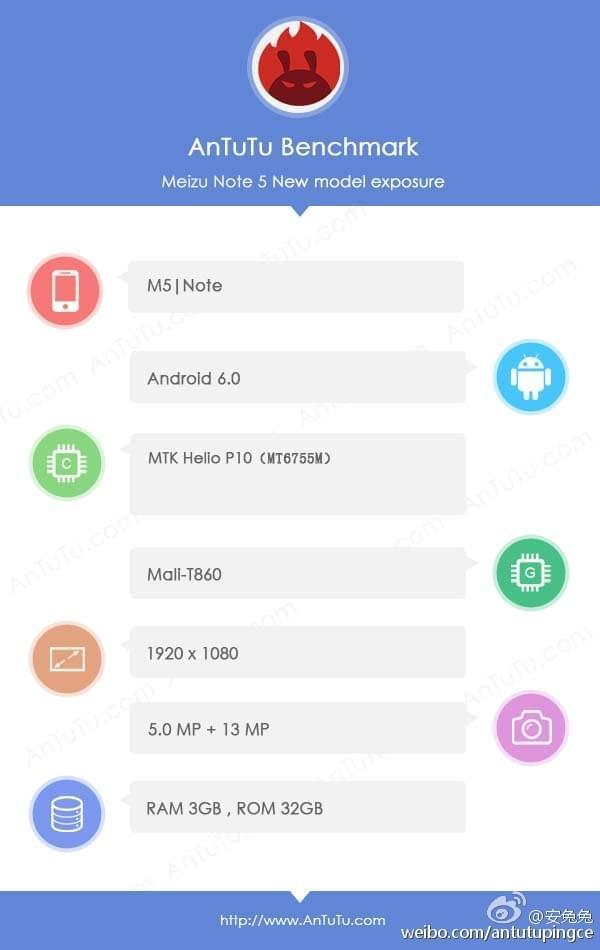