The Meizu M5 features a 5.2-inch 720p display, 2GB / 3GB of RAM and it is fueled by the MediaTek MT6750 64-bit octa-core processor. Now, this smartphone is actually made out of polycarbonate and comes in a number of color options. That being said, we really did not expect the company to introduce the ‘Note’ variant of this smartphone, as they already have the Meizu M3 Note that occupies that category, but it seems like the Meizu M5 Note handset is right around the corner. The Meizu M5 Note just surfaced on Geekbench, and showed off its benchmarking results, as well as its partial spec sheet. The Meizu M5 Note will, if Geekbench is to be believed, be fueled by the MT6755M SoC, which is MediaTek’s Helio P10 64-bit octa-core processor which fuels the Meizu M3 Note actually. The device will also pack in 3GB of RAM, and Android 6.0 Marshmallow will come pre-installed on it along with the company’s Flyme OS.

This smartphone has managed to score 686 points in Geekbench’s single-core test, while it scored 2,476 points in the multi-core test. It is also worth mentioning that the device was certified by the 3C authority in China quite recently as well, which also suggests this smartphone will be landing soon, and the certification revealed that we can expect fast charging to be included here as well. We still do not know when will this phone land, but chances are Meizu will announce it really soon, stay tuned. 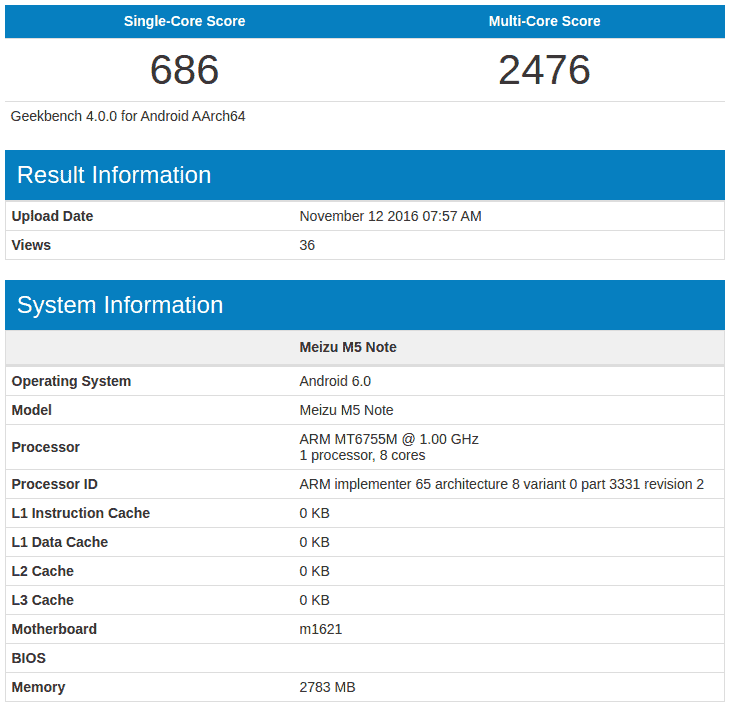