Over the past few years, smartphone displays have been gradually increasing in size. Devices that would have been considered “phablets” in the past are now common sizes for standard smartphones. For example, Samsung’s Galaxy S7 Edge actually sports a lager display than the original Galaxy Note, a device that emphasized its larger display as a selling point. Still, companies continue to push the boundaries of display size to accommodate those who need a bit more screen real estate. Smartphone users that require a large display may take interest in Lenovo’s upcoming PHAB 2 and PHAB 2 Plus.

The devices were first unveiled at this year’s Lenovo Tech World, and now Lenovo has announced that they will launch PHAB 2 Plus in India on November 8, 2016. The PHAB 2 plus comes equipped with a 1920 x 1080 6.4 inch display, a MediaTek MT8783 processor, 3GB of RAM, 32 B of expandable storage via a microSD card slot, a fingerprint sensor, and a Fujitsu-made 13-megapixel dual camera setup with laser autofocus. All of which is powered by a generous 4,050 mAh battery. The company seems to have put a good bit of emphasis on photography, adding camera features like refocus and background swap. It will come with Android 6.0.1 Marshmallow out of the box, with Lenovo’s Vibe UI. There will be two color options available at launch, Champagne Gold and Gunmetal Grey. The PHAB 2 plus is an attractive device, with slim side bezels and a curved glass display. While the larger size may be off-putting to some, the increased amount of screen space in which to maneuver will likely appeal to those looking for a device a bit larger than most of today’s flagship smartphones.

The PHAB 2 Plus will only be available in India, at least for the time being, and will need to be ordered through Amazon’s India-based website, Amazon.in. The prices of these devices have not yet been announced, however, the PHAB 2 is expected to sell for around $299.  Not much else is known about the PHAB 2 and PHAB 2 Plus, however, with the launch event only a few days away, more details should be revealed soon. 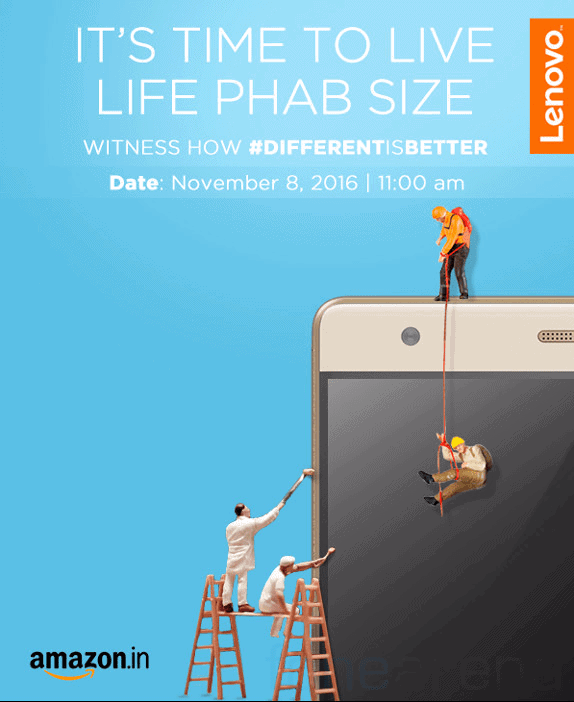