According to preliminary data from the International Data Corporation (IDC) Worldwide Quarterly Tablet Tracker, worldwide tablet shipments in the third quarter of the year have declined by 14.7% year-on-year, with tablet vendors shipping 43 million units. However, compared to Q2 2016, in the third quarter of the year tablet shipments were up 9.8% as manufacturers and vendors are now gearing up for the holiday shopping season. Apple maintains its lead despite a year-on-year decline, and is followed by Samsung and Amazon in the 2nd and 3rd place respectively.

IDC reports that one of the reasons behind the decline of tablet shipments lies in the low-cost detachable segment which has reached an all-time high as more vendors continue to flood the market. On the other hand, low-cost detachables offer a low-cost experience according to IDC senior research analyst Jitesh Ubrani, and “the race to the bottom […] may prove detrimental to the market in the long run as detachables could easily be seen as disposable devices […].” Nevertheless, it appears that the tablet market is quite generous to “slate companion devices” meant as a platform, including Amazon’s Fire tablet lineup. In fact, Amazon saw a year-on-year growth in tablet shipments in the third quarter of 2016 of 319.1%, accounting for 7.3% of the market (up from 1.5% in Q3 2015). IDC suggests that the Amazon Prime Day sale in July which had the Fire tablets on sale for 30% off greatly contributed to the outcome, and added that the new Amazon Fire HD 8 slate launched in October “will likely perform well in the holiday quarter”. Meanwhile, although Apple is pushing its iPad Pro lineup in the forefront, IDC reports that the iPad Air and iPad Mini were, in fact, the most sought-after Apple tablets, covering more than two-thirds of Apple’s tablet shipments in Q3 2016. Apple shipped 9.3 million tablets in the third quarter with 19.6% market share and experienced a 6.3% decline compared to a year ago. Samsung holds the second spot with 15.1% market share, but the company experienced a 19.3% decline year-on-year. According to the source, the issues surrounding the Samsung Galaxy Note 7 have not affected the company’s performance in the tablet segment, but then again, Samsung’s attempt to join the detachable market with the Galaxy Tab Pro S earlier in 2016 have not paid off.

It’s worth noting that besides Amazon, Huawei was the only other tablet manufacturer to experience year-on-year growth (24.8%) in the third quarter of the year. The company maintained a strong foothold in Asia and EMEA regions and has shipped 2.4 million tablets throughout Q3 2016, up from 1.9 million units in Q3 2015. 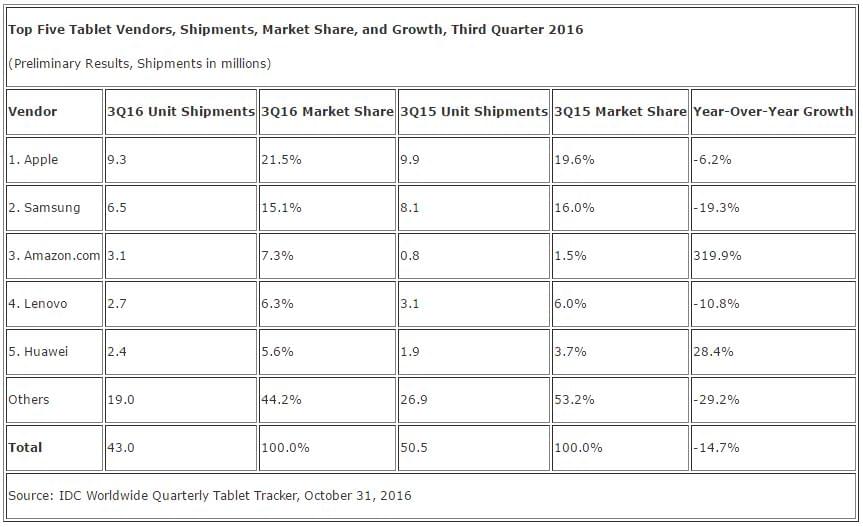