The Galaxy C7 Pro will be a slightly more powerful variant of the Galaxy C7 it seems, at least according to the AnTuTu listing that just surfaced. According to this listing, the Galaxy C7 Pro (SM-C7010) will be fueled by the Snapdragon 626, which is Qualcomm’s octa-core SoC clocked at 2.2GHz, that comes with the Adreno 506 GPU. This is a slightly more powerful SoC than the Snapdragon 625 that is included in the Galaxy C7, it’s essentially the same chip, but the Snapdragon 626 comes with a higher clock frequency. In any case, this smartphone will also pack in a fullHD (1920 x 1080) display, though we still don’t know how big will it be, Galaxy C7’s display is already quite big at 5.7 inches, so it is possible Samsung will utilize that very same panel in the Galaxy C7 Pro as well. The 16-megapixel camera snapper will be placed on both the back and front side of the Galaxy C7 Pro, though the front-facing camera will probably be inferior to the rear-facing snapper on the Galaxy C7 Pro. The device will also pack in 4GB of RAM and 64GB of internal storage. While Android 6.0.1 Marshmallow will come pre-installed on this smartphone, along with Samsung’s TouchWiz UI.

This is more or less all the info we have when it comes to the Galaxy C7 Pro. We still don’t know when will Samsung pull the trigger and launch this smartphone, but it will probably happen in the next couple of weeks, and it is possible that the company will market this phone as the selfie phablet, or something of the sort, as it has quite a capable front-facing camera. 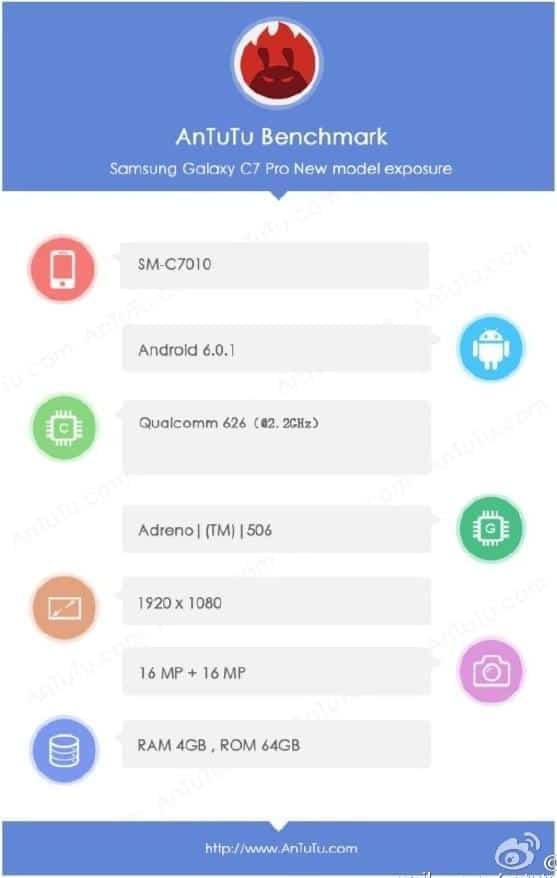