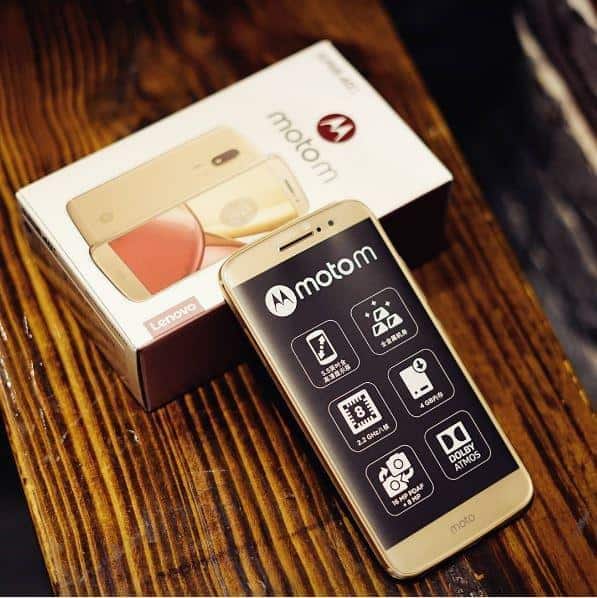 Before the Motorola Moto M was officially introduced in China last week, the handset has been the subject of several leaks and rumors, some of which came along with leaked live photos depicting the phone’s exterior design in somewhat blurry shots. Motorola’s official announcement was accompanied by press renders, but no live photos with the Moto M have hit the web following the smartphone’s market debut. That is until now, as Instagram user and self-proclaimed digital enthusiast @sunniton broke the ice and recently shared the first live photos showcasing the Motorola Moto M from a few angles.

The Motorola Moto M is targeted at the mid-range market, but nonetheless, the device carries a polished exterior design wrapping all of its components in a metallic body. The Moto M carries a fingerprint recognition sensor on the back panel, right below the 16-megapixel main camera featuring phase detection autofocus, an f/2.0 aperture, 1µm pixels, and an LED flash. The front panel is free of any hardware or capacitive buttons, as the Moto M uses near-stock Android 6.0.1 Marshmallow, and thus it carries on-screen navigation keys instead. Otherwise, the front panel proudly displays the “moto” logo on the bottom bezel, and while the device itself is free of any Lenovo branding, prospective customers who will acquire the Moto M will be greeted by at least one Lenovo logo during their unboxing experience.

Needless to say, the Motorola Moto M presents itself in a fashionable manner for the mid-range market segment, and for the price of roughly $295 in Eastern markets, it could be an appealing choice for users looking for an all-metal smartphone. Spec-wise the Moto M carries a 5.5-inch Super AMOLED display with a resolution of 1920 x 1080, a MediaTek MT6755 Helio P10 SoC (System-on-Chip) featuring eight CPU cores and a Mali-T860MP2 graphics chip, 4 GB of RAM, 32 GB of internal storage expandable via microSD by up to an additional 256 GB, an 8-megapixel front-facing camera sporting a 1/4" sensor and 1.12µm pixels, and a 3,050 mAh battery. At the time of writing there’s no official word from Lenovo regarding a possible release across the pond, so hopefully the Moto M will not remain exclusive to the Eastern markets.