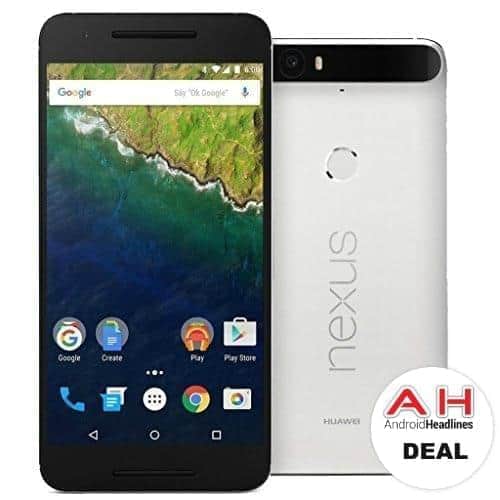 While the Google Pixel and Google Pixel XL are the newest kids on the block, so to speak, that doesn't mean that the Nexus 6P from last year is no longer a good smartphone to pick up. In fact, it still holds its own against the Pixel and Pixel XL. It also has a larger display, which is great for those that are wanting something larger than a 5.5-inch display, which the Pixel XL boasts. The Nexus 6P was built by Huawei last year, and it runs on the Snapdragon 810 processor along with 3GB of RAM. Google offered it in 32GB, 64GB and 128GB capacities. And right now the 64GB capacity here is the cheapest model available, coming in at $449. It's also only this price for the "frost" or white colored model.

The Nexus 6P does run on Android 7.0 Nougat, which is currently the latest version of Android. It does also run the Android 7.1 developer preview which should be launching fairly soon for the device. Being a Nexus, it does get updates every month to patch security vulnerabilities. It's also a great smartphone to tinker with, seeing as the bootloader is unlockable, so you are able to flash a custom ROM or anything else with ease. You can pick up the Nexus 6P from the link down below.

Buy the Google Nexus 6P - 64GB
Advertisement
Trusted By Millions
Independent, Expert Android News You Can Trust, Since 2010
Publishing More Android Than Anyone Else
25
Today
144
This Week
399
This Month
5143
This Year
106618
All Time
Advertisement