The Pixel and the Pixel XL are not only two of the newest smartphones on the market, but they are also two smartphones that mark a departure away from the usual way Google does things. As a result, many will be watching the initial launch period of the Pixel and the Pixel XL to see how they perform. As this will be thought of as a large indicator of how Google is actually performing, now that it has joined the smartphone market in an official capacity.

Speaking of which, it now looks as though we are starting to see the first of what will be many reports coming through on the sales performance of the Pixel and the Pixel XL. This new data comes from Appboy and while it does not provide direct insight into ‘units shipped’, it is provide a nice overview of how app usage can provide additional information on the level of smartphone adoption. The information drawn was based on analysis of 100+ million daily app devices and between October 20 and 27, 2016. According to the figures from Appboy and following the initial week of release, the Pixel and the Pixel XL obtained a market share of 0.016-percent and 0.020-percent, respectively. To put this into perspective, the same report notes that the Google Nexus 6P took more than 2 weeks to reach a similar level of market share. This inevitably does suggest that in its first week of release, the Pixel and the Pixel XL were being used by twice as much users as the Nexus 6P did during the initial week of availability.

Interestingly, the reported information does lead Appboy to note that the inclusion of Verizon as one of the launch partners for the Pixel and Pixel XL was one of the factors that helped drive the greater levels of adoption seen. This is largely thought to be thanks to the additional street presence offered by Verizon, including in-store availability, greater marketing and better shipment logistics. Of course, the Pixel and Pixel XL seeing better adoption rates in their first week compared to the Nexus 6P is not really saying much in terms of the wider smartphone market. Appboy highlights this point by noting that the Samsung Galaxy S7 (and the Galaxy S6) obtained higher levels of adoption after their first day of release, than the Pixel and Pixel XL did in their first week.

Another interesting point that is worth mentioning, is that in contrast to what Appboy normally sees in such data, the Pixel and the Pixel XL are not exactly conforming to normal behavior. For instance, the report notes that usually the ‘day after the release day’ is the biggest adoption day for new devices. In terms of the Pixel and Pixel XL, the reports notes that atypical spikes in adoption occurred ‘two days after release’ and again on October 25. The reasons thought to be be behind these spikes is the Pixel and Pixel XL stock levels dwindling and then becoming available again randomly. Which would suggest that if the two devices were in stock more often, sales and adoption rates for the Pixel and the Pixel XL could have been even higher, during the initial launch period. Either way, you can see a breakdown of the data with comparisons made between the Pixel and Pixel XL and the Galaxy S7 and S6 in the two charts below. 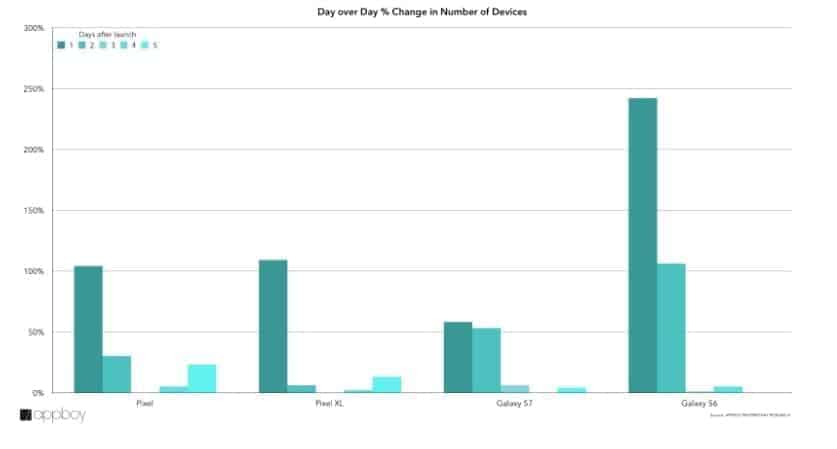 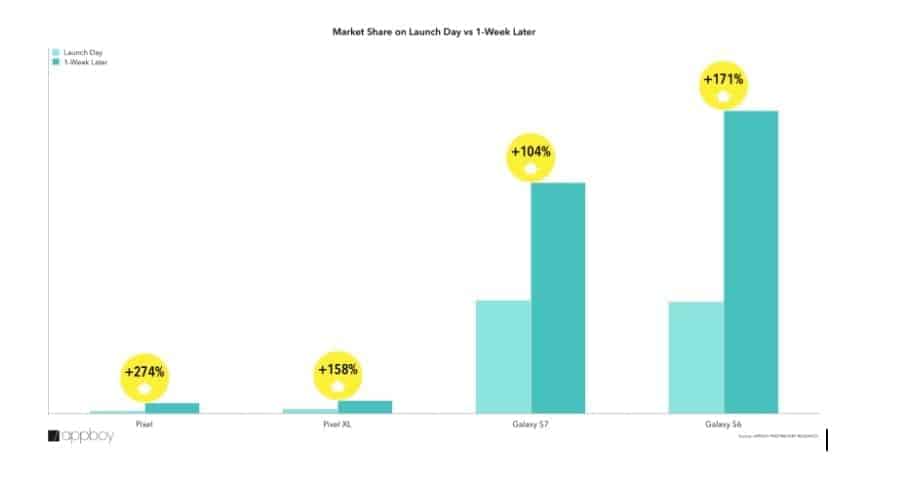