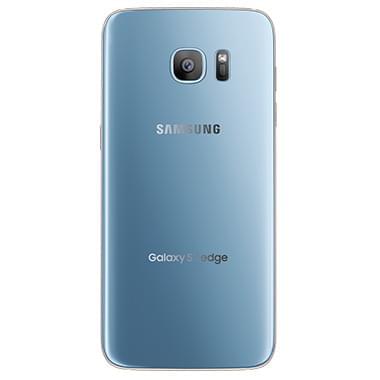 Samsung is launching a new color of the Galaxy S7 Edge in time for the holidays. It's coming in "Blue Coral". It has already launched at Verizon, and now it's available at T-Mobile. Now, when compared to the Galaxy S7 Edge that was released earlier this year, there is absolutely nothing different. The only difference here is the color. So that in addition to the Silver Titanium and Gold Platinum  you now have Blue Coral to choose from. It's a nice looking color, and features a copper looking trim. The Blue Coral Galaxy S7 Edge is available for the same price as well, coming in at $789 full retail or $69.99 down and $30/month for 24 months.

For those that may need a refresher, the Galaxy S7 Edge sports a gorgeous looking 5.5-inch 2560×1440 resolution Super AMOLED display, powered by Qualcomm's Snapdragon 820 processor and 4GB of RAM. It comes with 32GB of storage, but it is expandable via the micro SD card slot. Additionally, it has a non-removable 3600mAh battery inside, which should keep the device running all day long without any issues. The Galaxy S7 Edge has one of the best cameras released this year, and it's a 12-megapixel shooter. The front-facing camera is a 5-megapixel shooter.

Buy the Samsung Galaxy S7 Edge in Blue Coral (T-Mobile) Buy the Samsung Gear S3 Frontier from T-Mobile
Advertisement
Trusted By Millions
Independent, Expert Android News You Can Trust, Since 2010
Publishing More Android Than Anyone Else
37
Today
245
This Week
246
This Month
4991
This Year
106466
All Time
Advertisement