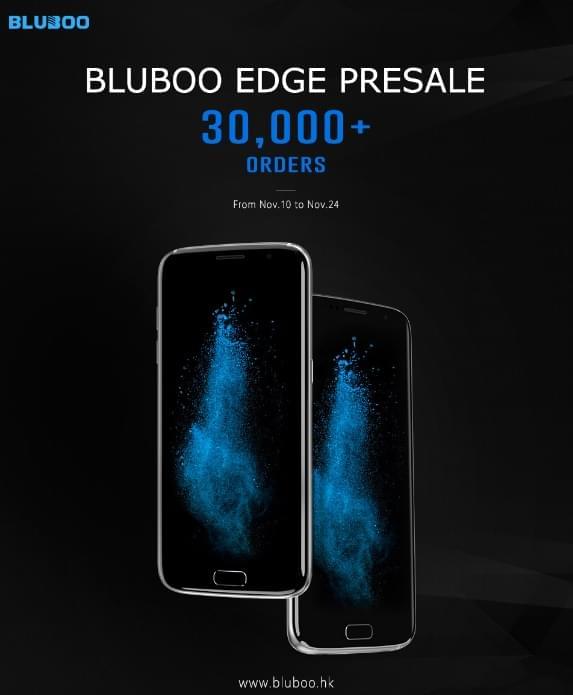 The Bluboo Edge is the latest smartphone to come from Bluboo Mobile and is one which follows in the footsteps of the Samsung Galaxy S7 Edge and the Galaxy Note 7 by making use of a display which boasts dual curved edges. However, unlike the Galaxy Note 7 which was the subject of a full recall, the Bluboo Edge seems to be off to a solid start as Bluboo Mobile has now confirmed that the Bluboo Edge has already sold 30 thousand units within its first week of being available to pre-order. While not the highest sales figures, it is certainly a figure which represents a solid start to the latest dual curved edge device.

Of course, one of the big selling points with the Bluboo Edge over the likes of the Galaxy S7 and Note 7, is its price. Unlike the curved edge devices from Samsung, the Bluboo Edge is designed to be an ultra-affordable smartphone and is available to pre-order for as little as $129.99. Although, in spite of being an affordable smartphone, this is one which does not compromise in the specs department, as the Bluboo Edge is a smartphone which comes packing a 5.5-inch OGS display with a HD resolution. Inside, you will find 2GB RAM, 16GB internal storage and a MediaTek MT6737 quad-core processor (clocked at 1.3 GHz) powering the show. Additionally, the Bluboo Edge includes a 13-megapixel rear camera, a front-positioned fingerprint reader and a rear-positioned heart rate monitor. As well as additional benefits like expandable microSD storage with microSD cards up to 256GB supported.

So all in all, and certainly for the cost, this is a fairly impressive smartphone. While the Bluboo Edge is still available to pre-order at the $129.99 price, it is worth keeping in mind then when it goes on general sale, the Bluboo Edge will be priced at $159.99. So there is a financial incentive to ordering now and before the general availability commences on November 24. Not to mention, Bluboo Mobile also happens to be running a giveaway where winners will be able to get their hands on the Bluboo Edge for free. You can find out more about the giveaway and how to pre-order by heading through the link below.

Advertisement
Pre-order the Bluboo Edge
Advertisement
Trusted By Millions
Independent, Expert Android News You Can Trust, Since 2010
Publishing More Android Than Anyone Else
5
Today
73
This Week
181
This Month
4166
This Year
105643
All Time
Advertisement