When it comes to flagship smartphones, it certainly does seem as though ‘blue’ is the color of the season. When Google announced their new Pixel phones, they also announced a limited edition ‘Really Blue’ model. One which seems to be a popular choice, in spite of consumers not actually being able to readily pick one up. Then of course, last week (after much speculation) Samsung announced that they were releasing a new colored Galaxy S7 Edge. As you might have guessed, a blue one, ‘Blue Coral’ to be specific.

However, in spite of announcing the Blue Coral Galaxy S7 Edge, Samsung did not really provide any firm details on when exactly consumers will be able to pick up the smartphone, other than stating that it will be made available during the Holiday season. Well, if you happen to be planning on picking up a Galaxy S7 Edge in Blue Coral and specifically from AT&T, then it looks like AT&T are offering some firmer details on when you can expect to be able to pick one up.

The Blue Coral Galaxy S7 Edge is already available to pre-order from AT&T and their product page listing does currently make it clear that pre-orders made will ship between November 18 and November 22. Therefore, it does stand to reason that the Blue Coral edition will become available in the US (at least through AT&T) on or around the 18th of November. Although, and the very least, the page does highlight that if you buy the Galaxy S7 Edge in Blue Coral through them, the longest you will have to wait to receive the smartphone will be November 22. Which does mean that as it currently stands, orders made through AT&T will likely be fulfilled before the Thanksgiving weekend kicks off. Whether that is the same for the other carriers or whether you should hold out for a Black Friday deal on the Galaxy S7 Edge (in any color), remains to be seen. Either way though, if you do want to secure yourself an AT&T Blue Coral version of the Galaxy S7 Edge, then you currently can by heading through the link below. 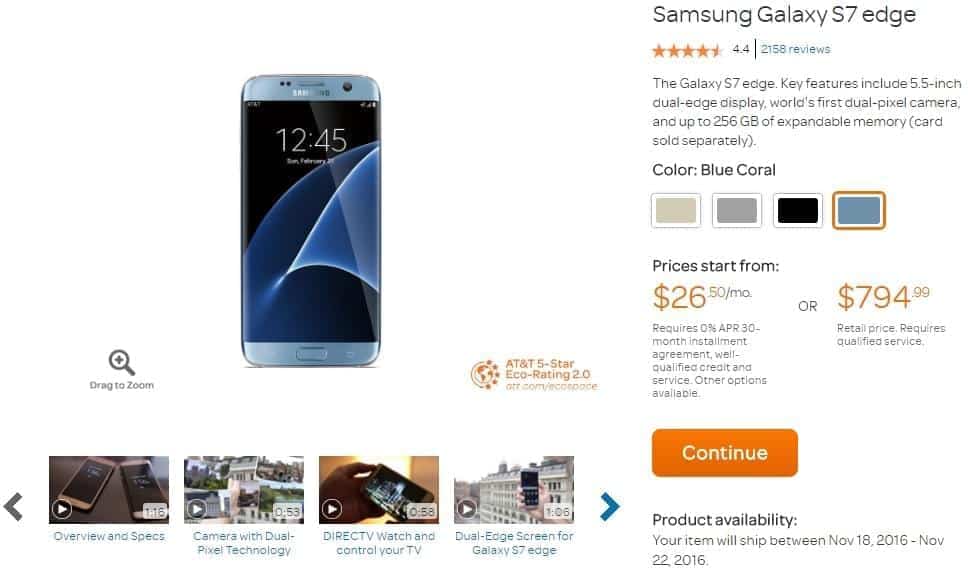