In terms of this new and currently unknown smartphone, the device is currently going by the BV0800 model number. Which does not provide any useful information in itself. However, along with the benchmarking, a number of the specs have been confirmed. As such, it clear that the ZTE BV0800 makes use of a 5.2-inch form factor, while the display adopts a 1920 x 1080 resolution. Inside, the listing confirms that the ZTE BV0800 comes packing 3GB RAM, 32GB internal storage and is powered by a Qualcomm Snapdragon 430 quad-core processor.

Interestingly, as well as the rear camera being a 13-megapixel camera, the front-facing camera is also a 13-megapixel camera. Which does suggest that this very well could be marketed as a ‘selfie phone’. Just as interestingly, the listing also seems to detail that unit tested was tested while running on Android 7.0 (Nougat). While that in itself is not confirmation that the device will definitely hit the market running Android Nougat, if it does, it will be one of the first, if not the first, ZTE device to come to market running Android Nougat out of the box. Although, that would also of course depend on when the ZTE BV0800 does come to market and whether anything else is released from the company in the meantime. Either way, according to this latest benchmark, the takeaway is likely to be that ZTE looks ready to release a new smartphone which will likely be more of a mid-range handset, be selfie-oriented and will come running on Android 7.0 out of the box. 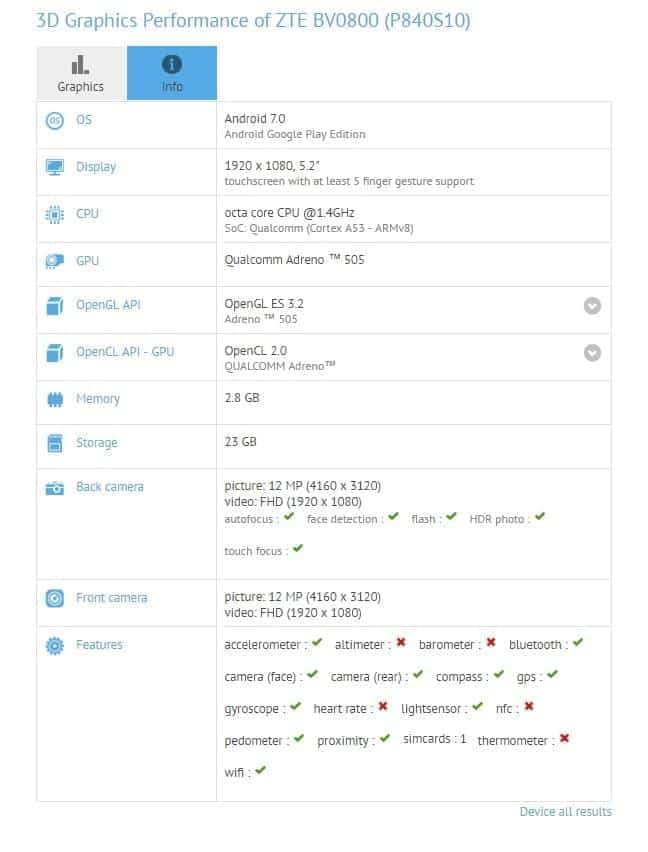