Just last week, well-known HTC ROM developer, @LlabTooFeR, twitted that the Android Nougat build for the HTC 10 is now “stable”. While the MaximusHD ROM creator did not give any further details about the update, the tweet did mention that the time for the rollout is indeed “getting close”. To put all HTC 10 owners out of their collective misery, the Taiwanese firm has now announced that folks using the unlocked version of the smartphone in the U.S. will start receiving the much-awaited update from today itself. In case you’re using a carrier-branded version, though, you might have to wait a little longer to get the new software on your phone, but it should only be a matter of time as long as everything goes according to plan.

According to a tweet posted by the official account of HTC USA, the Android Nougat update will continue “through early next year” for the carrier-branded models. So it might take another few weeks before all HTC 10 owners in the country get the latest version of Android on their phones. Thankfully, though, it’s not the only HTC phone that will receive Android 7.0 over the coming weeks. The company has announced that the One M9 and the One A9 will both also get the Nougat update alongside the HTC 10, but just like the newer device, users with carrier-locked models of those two handsets will likely have to wait until next year to actually get the new software on their phones.

An earlier tweet by @LlabTooFer had also suggested that the Nougat update could hit the HTC 10 at some stage during late November or early December, so the latest developments are well in line with those claims. Either way, while US owners of the HTC 10 will start receiving their update notification today onwards, users in other parts of the world need not despair. The company says that its engineers are “working hard to bring the Nougat update to other regions”. In case you’re in the US though, you should be among the first to get the all-new flavor of Android on your unlocked HTC 10. The update, however, is expected to be rolled out in phases as usual, so it might take a few days before you get the notification on your device. 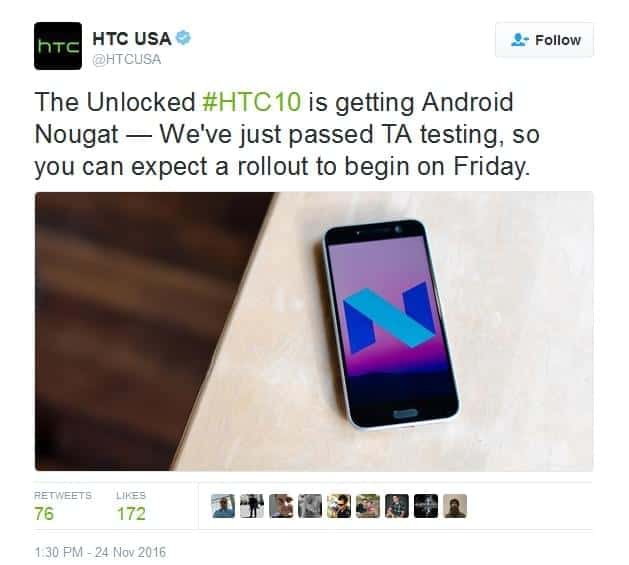