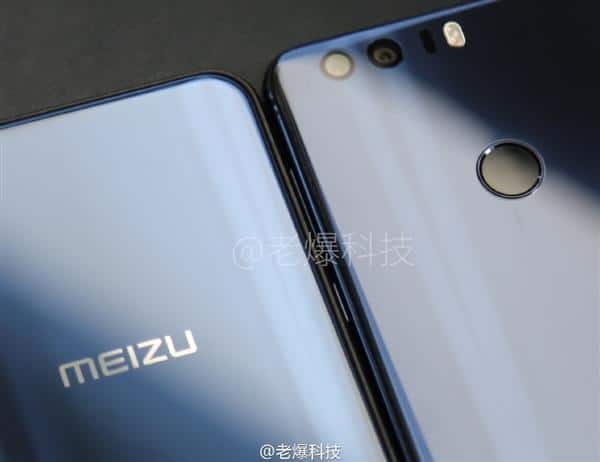 Meizu had released two teasers in the last couple of days. The company had teased the release of the Meizu X smartphone for November 30th, and their second teaser suggested that Flyme 6 OS could also be announced on said date. Flyme 6 is the 6th iteration of the company's Android-based OS, and chances are it will be based on Android 6.0 Marshmallow at first, and then the company will release its Android 7.0 Nougat variant later on. Anyhow, regarding the Meizu X smartphone, we don't really have all that much info about this smartphone, and have seen only its retail packaging thus far, well, at least until now, a couple of Meizu X images just surfaced.

If you take a look at the gallery down below, you'll get to see two images of the Meizu X, at least alleged ones. The first image gives you a look at the phone's back side, and next to it is the Honor 8. As you can see, both of these devices sport a rather interesting pattern on the back, the Honor 8 came with a number of glass layers on the back which created that beautiful pattern which changes as you move the device, and it seems like Meizu plans to implement something similar on the Meizu X. If this leak is accurate, the Meizu X will sport glass on the back as well, along with the company's branding. Unlike the Honor 8, however, the Meizu X will ship with a front-facing fingerprint scanner, which is something the second image in the gallery more or less confirms. The phone sports the company's mBack multifunctional physical key below the display, and that key will double as a fingerprint scanner, while it also serves as a physical home key and a capacitive back key. The frame of this phone will be made out of metal, which is also quite visible in the second image down below.

The Meizu X is expected to pack in the Helio P20 64-bit octa-core processor by MediaTek, which more or less means we're looking at a mid-range phone here. In addition to the Helio P20, the Meizu X will come with 4GB / 6GB of RAM, at least according to rumors. The 6GB RAM variant of the phone is said to pack in 64GB of storage, while the 6GB RAM model will ship with 128GB of native storage. The former handset is expected to cost 1,799 Yuan ($260), while the latter could be priced at 1,999 Yuan ($289).