NHL is the most popular hockey league in the world. This league is combining teams from Canada and the US, and NHL is actually quite popular in both of those countries, while people who live on other continents also tend to watch some games, NHL has fans all over the world. That being said, We’ve recently talked about the best hockey games out there, well, we’re here to take a look at a list of best HNL apps. We’ll try to combine both apps and games on this list in order to give you a useful list of apps which are NHL-related. Before we begin, please do keep in mind that these are our picks, it is possible that you prefer other apps. Also, these apps are not listed in a particular order. Having that in mind, let’s begin. 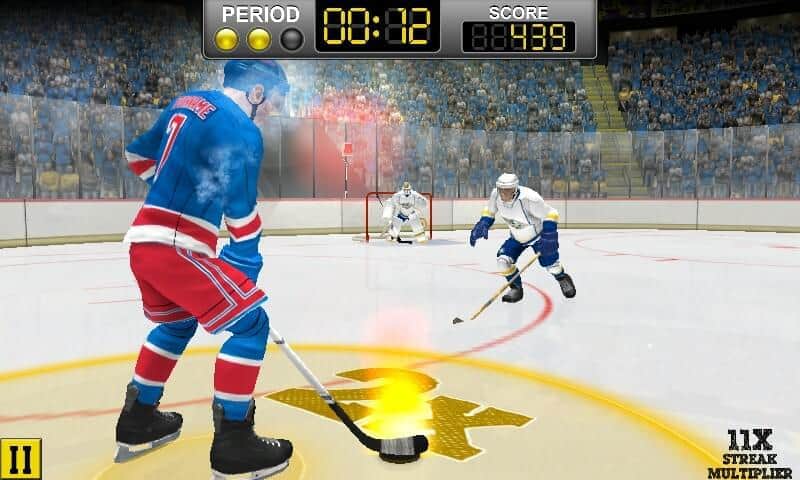 This game has a very descriptive title actually. In the ‘NHL Hockey Target Smash’ game your goal is to smash various targets which are located inside of a goal. As you progress, you’ll be able to unlock new gear, and you can play with either one of NHL teams. The game is quite fun, and it’s packed with various features which keep it interesting, while it is also free to download and play, even though in-app purchases are included here. 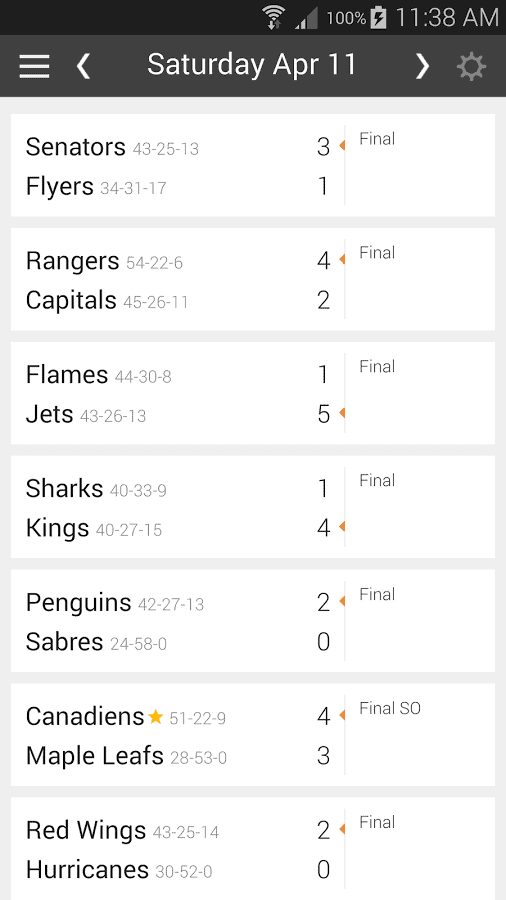 Those of you who like to know what the score is on a specific NHL game, and also like extremely simple designs will love this application. Hockey Scores NHL Schedule will let you know once your team scores, and it also has tons of other info included here. The UI is incredibly simple, you’re basically getting various combinations of yellow and gray colors which put complete focus on game scores. This app will also get you TV listings for various games, and so much more. 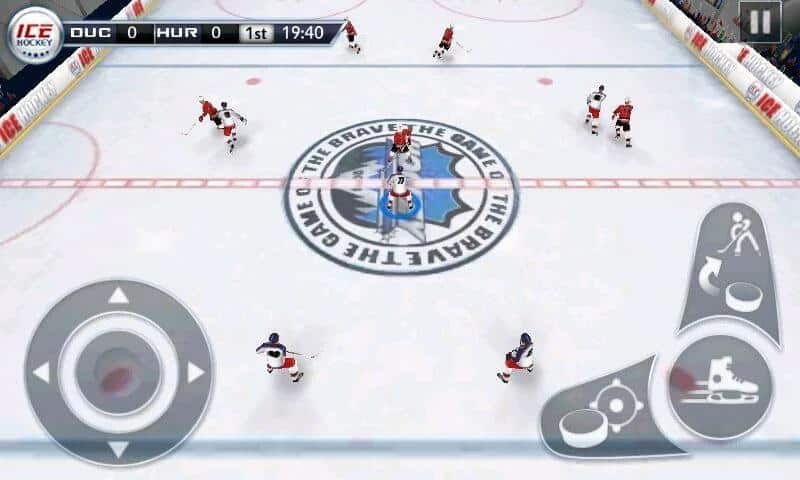 Ice Hockey is yet another game on this list. This is a 3D game which has lots to offer, even though it can take some time for you to get used to the controls. You can customize your team with over 20+ uniforms in this game, and also train your players in order to boost their abilities. There are two main modes included here, Quick Play and Championship, though the latter one includes a couple of sub-modes for you to check out. 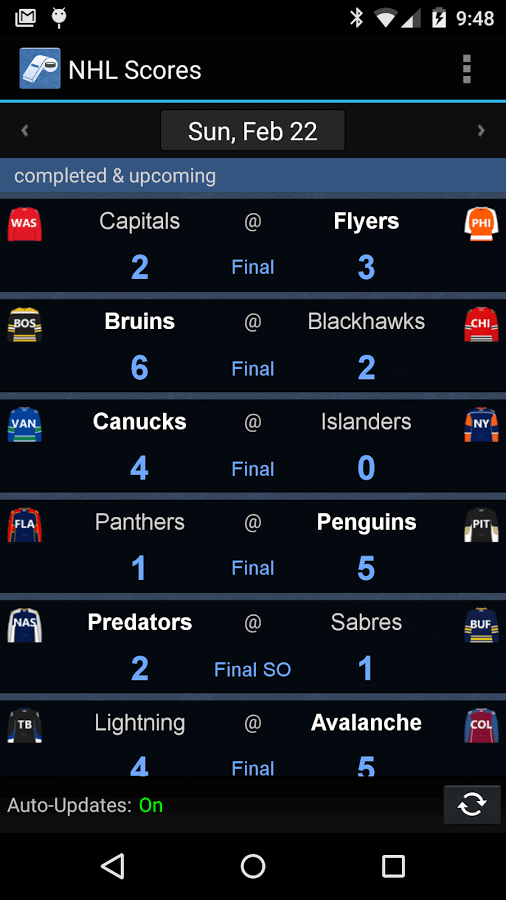 Sports Alerts is, much like Hockey Scores NHL Schedule, an NHL live score app, but it’s immensely different than its competitor. This app offers a completely different design, while it has different features as well. Live updates are a part of this app, while you also get full team rosters, team schedules, live scores, game highlights… and so much more. This app is free to use, though in-app purchases are included here. 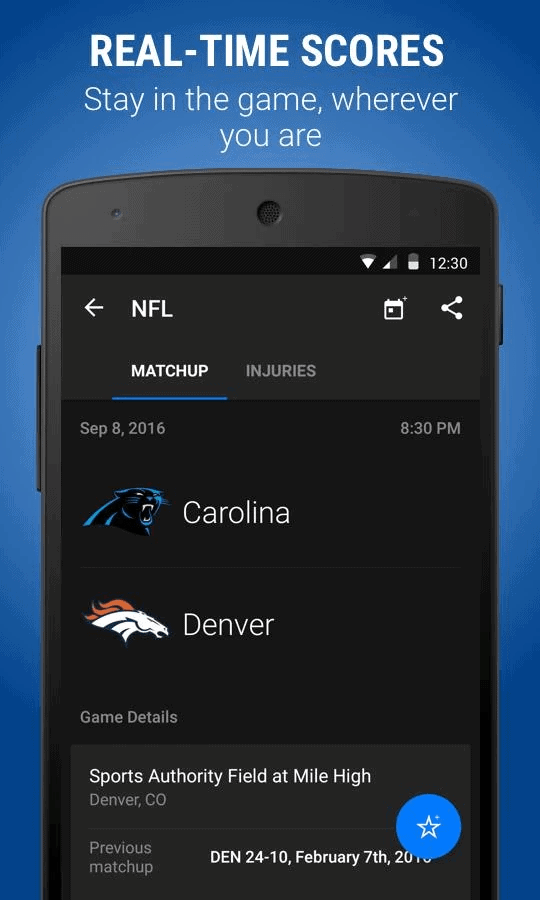 theScore also delivers live scores for NHL games, but it also covers a number of other sports, like football, baseball, basketball, soccer, golf, etc. This is the closest one to Google’s Material Design guidelines, if we compare it to the other two we’ve mentioned here already. The app is actually quite customizable, just in case you don’t like the default design, and it also delivers various sports-related news. 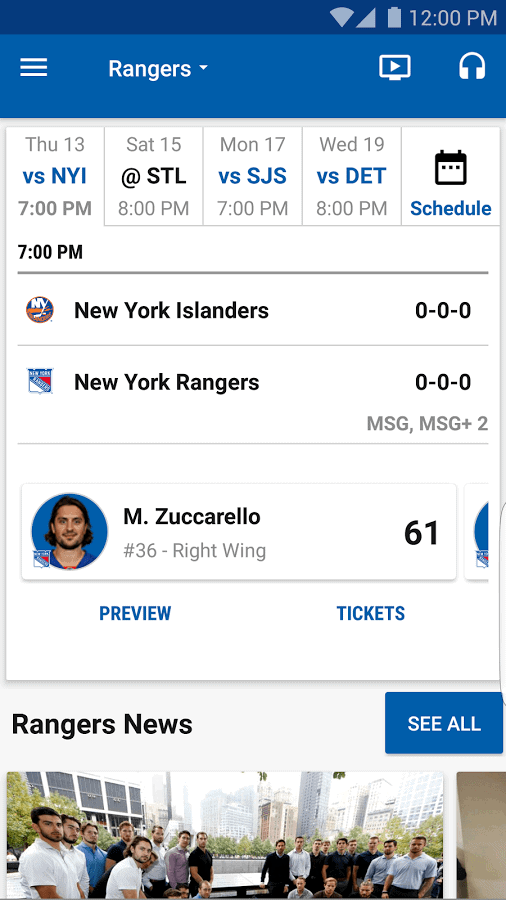 NHL is actually NHL’s official app, as you might have guessed. This app contains tons of info when it comes to every single NHL team, as expected, while it also offers nice, flat design. The app allows you to watch two minutes of action in every regulation period (live), while it also offers in-game highlights, personalization, etc. If you’d like to subscribe, you can get way more content, you’ll need to pay out a yearly fee of $19.99 though. 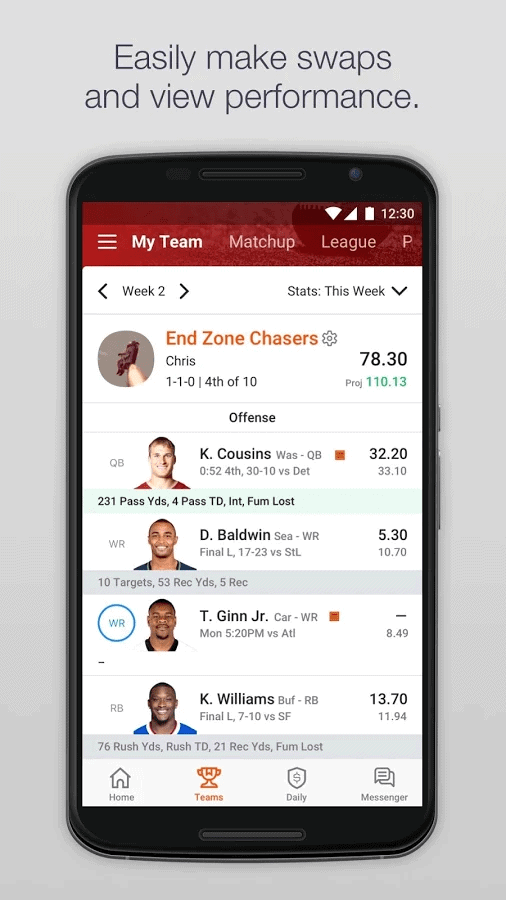 Yahoo Fantasy Sports is one of the best fantasy sports apps for Android at the moment. There are a number of sports available here, including football, baseball, basketball… and hockey, of course. Now, the app allows you to manage your roster, talk to your league mates, recruit players… it’s basically your regular fantasy sports app with plenty of features included. The design of this app is also spot on, and it’s free to play. 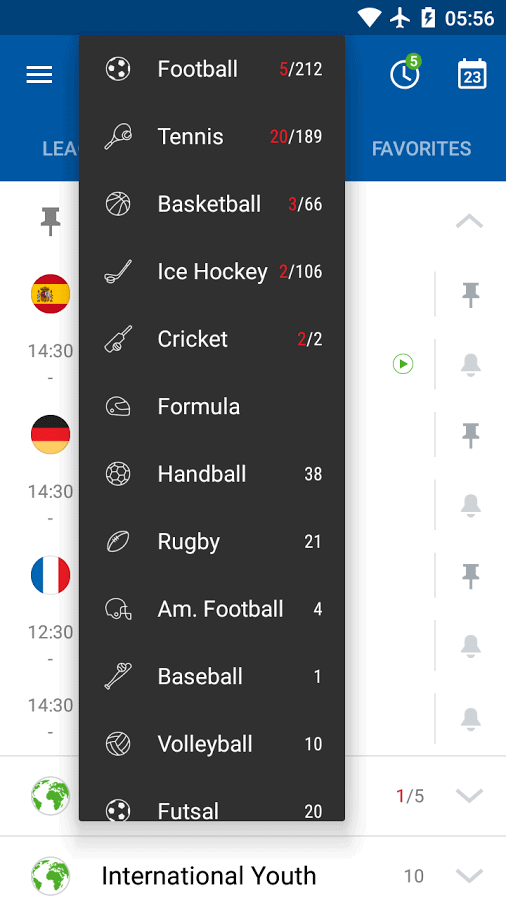 SofaScore is one of the most popular live score apps on Android, and also one of the best-rated ones. This application offers tons of sports, including hockey, of course. It not only comes with a really nice UI, but also offers push notifications and allows you to set in-game triggers for those notifications. You can check out your favorite teams here, and also various info regarding every single player of that team. There are tons of features included here, that’s for sure. 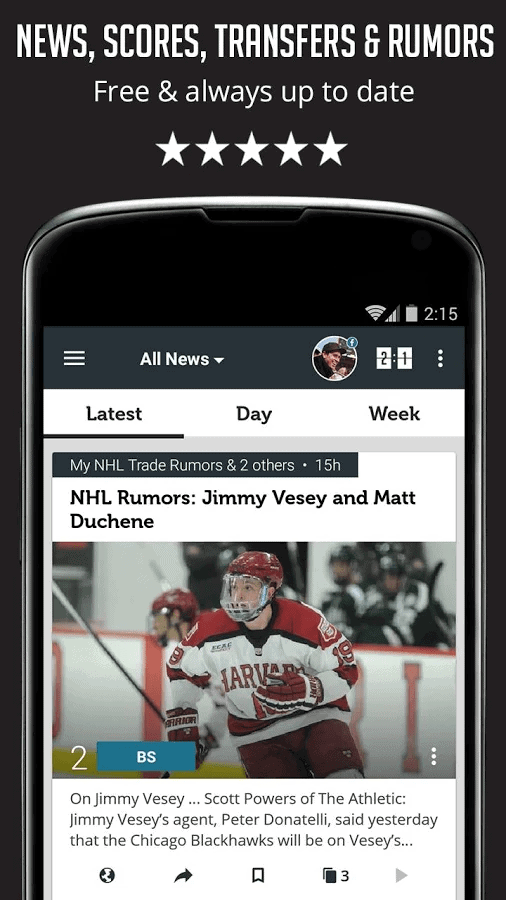 Sportfusion app is your news source for everything NHL-related. This app offers you various news from the world of NHL, and also live scores, results and various video content you can check out. Push notifications are also supported by this app, and you can personalize your news feed, which is always a great feature. The app is free to use, though in-app purchases are included here. 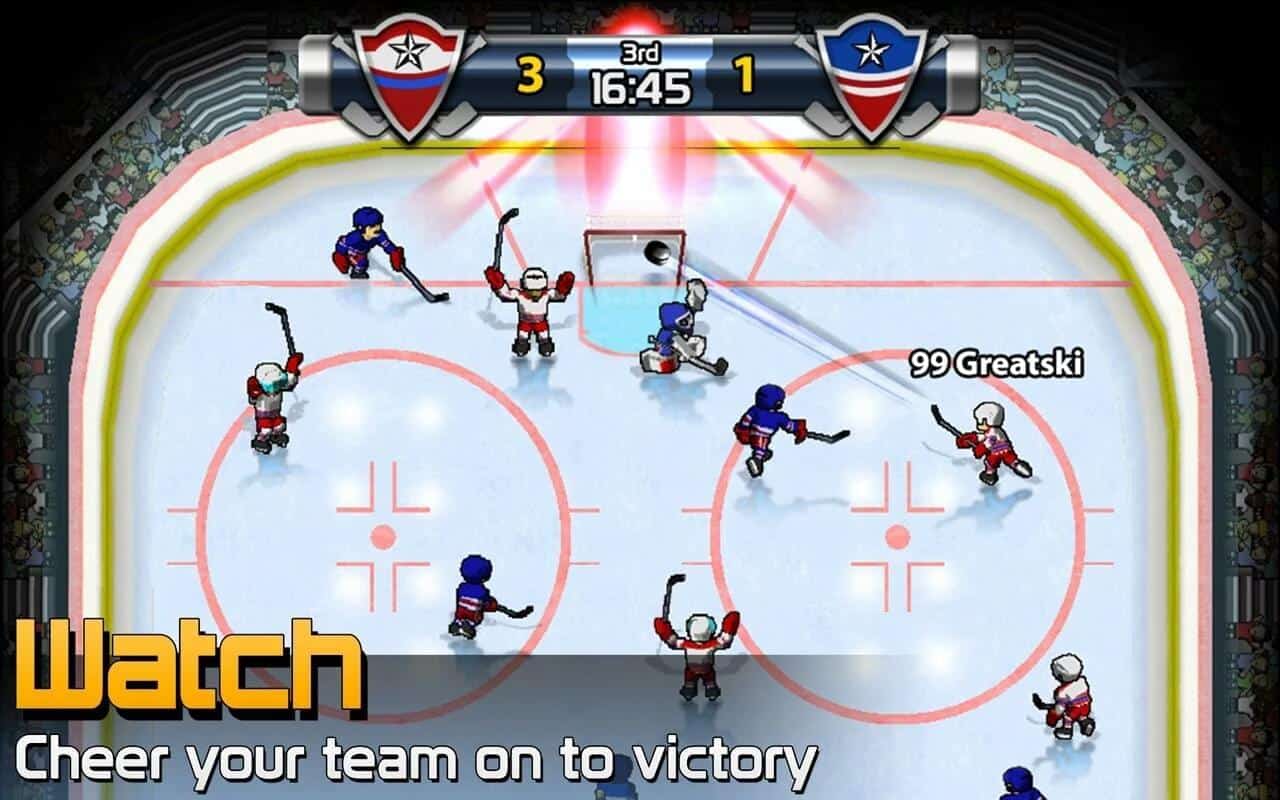 BIG WIN Hockey is a very fun game that has been around for a long time now. This game lets you create your team and compete against opponents all over the world. You will need to boost skills of your players through training and experience, while the graphics in this game are also quite interesting. The game is free to play, though in-app purchases are present here, as they are in the vast majority of games we’ve listed here today.