While the world might be moving away from traditional tobacco smoking into the brave new world of vaping, there are still a healthy number of people that enjoy smoking as it was originally intended. For a lot of people, this means smoking a cigar of some sort, and given that tobacco is grown all over the world, with Cigars produced all over the globe as well, smoking one Cigar to another can be like fine wine tasting is to some people. To that end, it’s nice to connect with other Cigar smokers, as well as keep track of some of your favorite smokes and of course find out where to buy more. This Top 10 list should have a little something for everyone and cover the above criteria quite nicely. 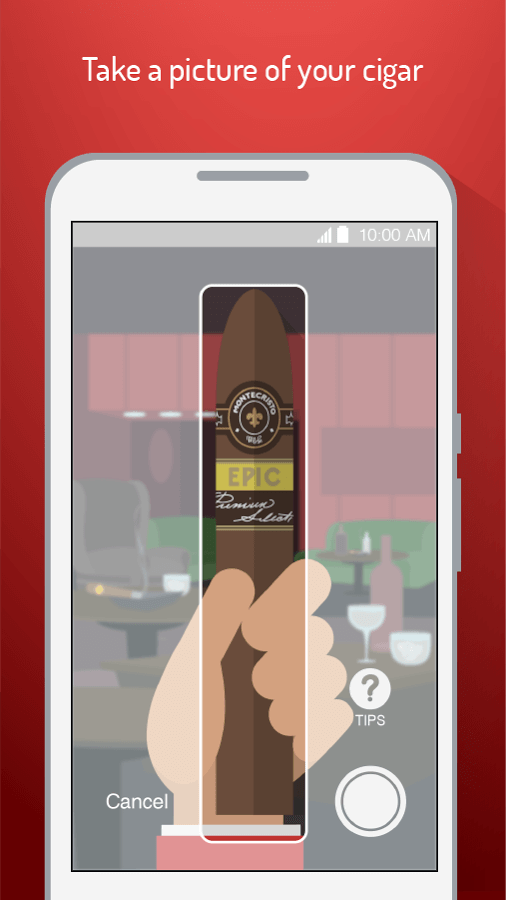 Cigar Scanner is a great app for both those new to the world of Cigars as well as those that have been immersed in it for some time. It’s a way for smokers to take a photo of their Cigars and collect information on their favorite options, find out more about the brand behind the smoke and keep a record of your favorite brands. On top of that, there are also articles and commentary from Cigar experts found within, too. Free to download and use, this is a decent Cigar app for all smokers out there. 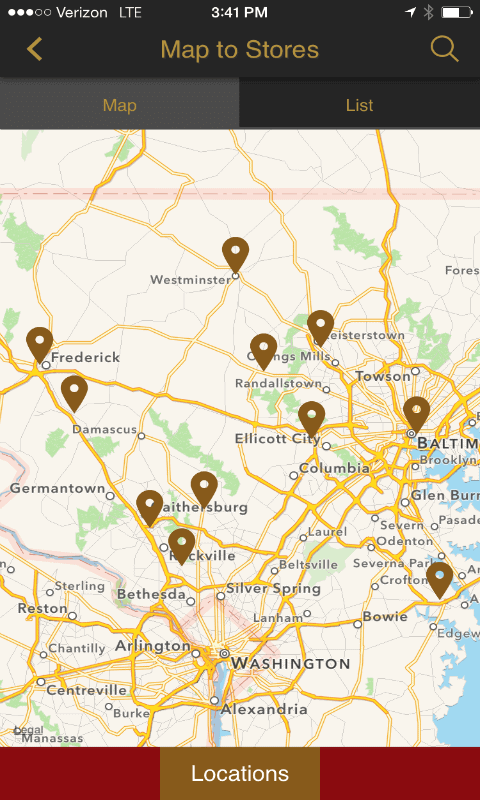 This is an app for those looking to find a decent store near them that sells and stocks an excellent range of Cigars. While it might only be good for the Baltimore and Washington area, it’s a handy app to have for those traveling to the Washington state area, and given the brand’s good name, it might be worth an entirely separate trip. Perfect for those looking for a quality lounge and a great service, these are some of the better stores out there. 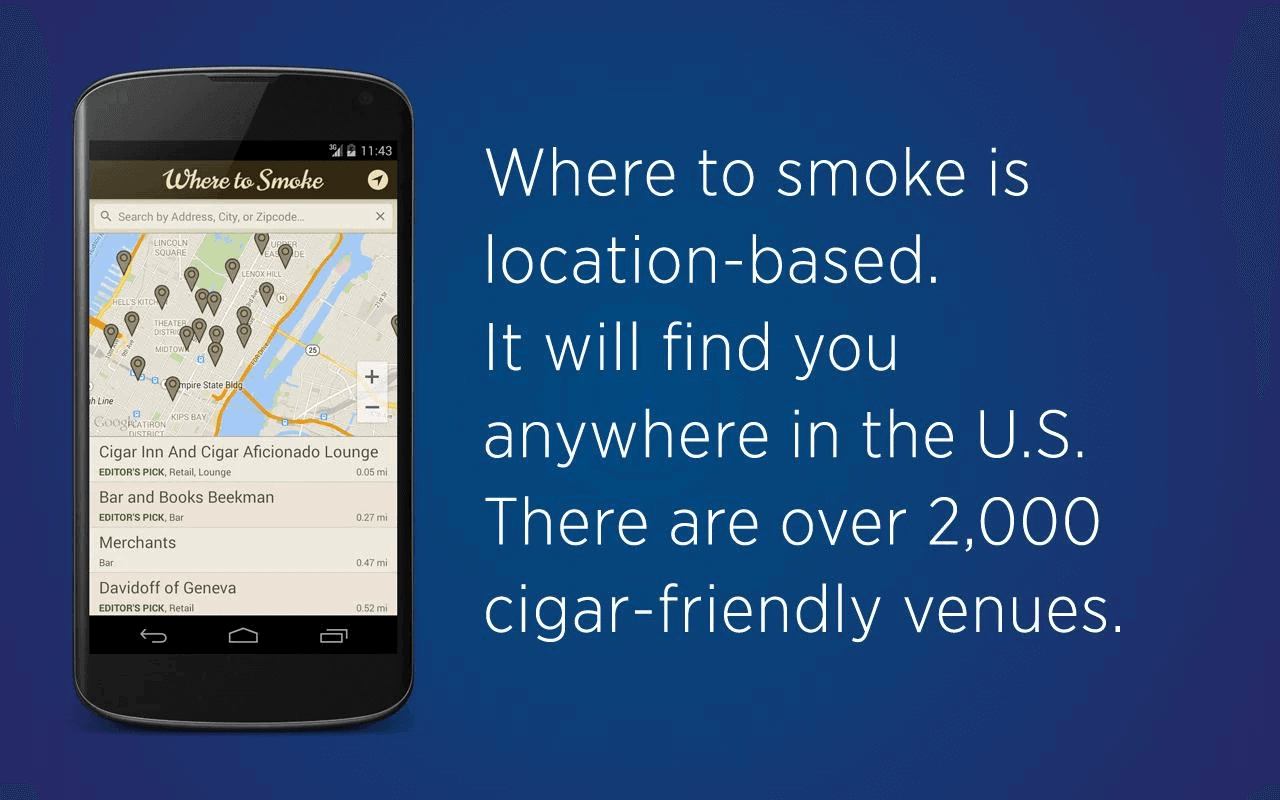 Across the United States it’s becoming more and more difficult to find a place where you’re allowed to smoke, and while relaxing at home with a quality stogie is something many of us enjoy, there’s nothing like sharing the experience with others. This is where Where to Smoke comes in as it provides users of the app with access and locations of over 2,000 places where you can smoke. This also offers up their addresses as well as phone numbers making it real easy to see if the locations listed are still around. 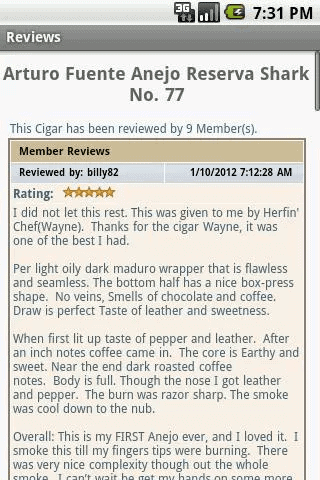 This might be a pretty old app at this point, but it still has a lot going for it, and is still recommended by a lot of Cigar aficionados out there. A massive database full of Cigars just waiting for people to peruse and see what takes their fancy, Cigar Geeks has a lot going for it. This app also matches up with the Cigar Geeks website so your virtual humidor is all lined up nicely, and with over 30,000 Cigars listed with over 20,000 reviews, there’s a lot going for this app. It is, however, given that it’s not been update for a long time, a little on the expensive side. 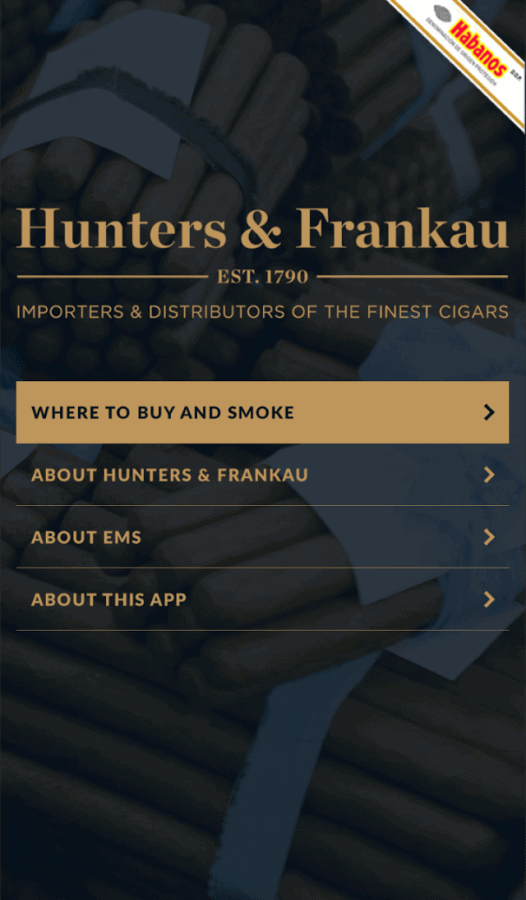 Something for our readers across the pond now, and H&F Cigars is the app for our UK readers to find the locations of Hunters & Frankau stores. These are some of the finest retailers of Havana cigars and some of the locations still include places to smoke and relax in as well. Either way, this is a great app for those in the UK to find out where their nearest place to shop for proper Cigars. 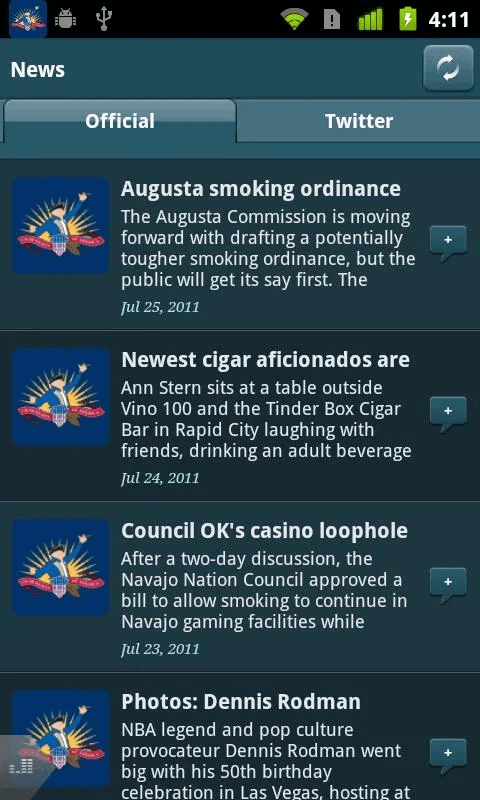 Jumping back across the pond to the US and the CRA app will be of particular interest for those that are keen to make sure their Cigar Rights aren’t impacted any further, and given the aggression that some smokers are facing these days, this will be an app of particular importance for some. The CRA is an app that keeps tracks of local as well as national laws that might affect things for smokers all over the nation. 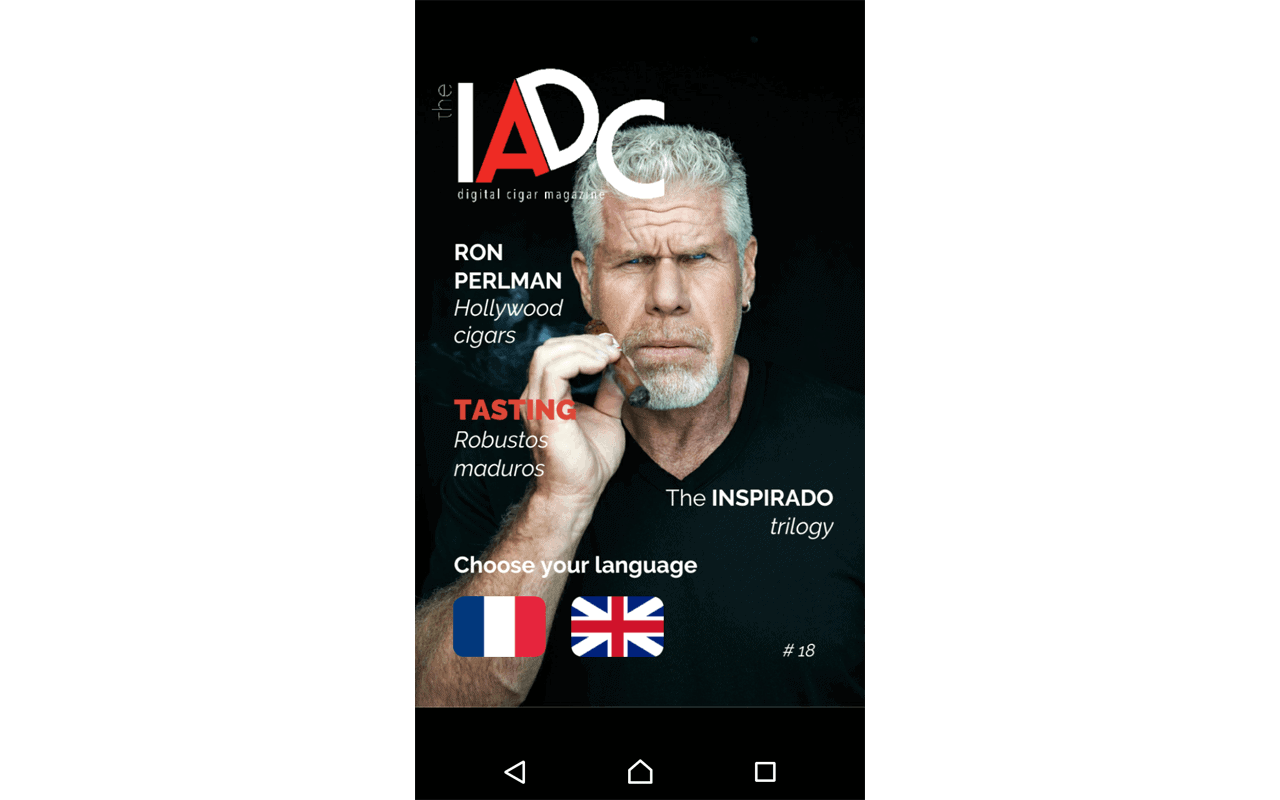 The IADC is a monthly magazine for Cigar enthusiasts and this is the Android app that smokers can use to get a hold of the latest issue. While there’s not much to be gleamed from the Play Store listing, it looks as though this is a well-respected publication, and one that should deliver insights into certain Cigar brands as well as the personalities smoking them. Just like the art of the Cigar is fading away, so too is the magazine, so perhaps these two going hand-in-hand is a good thing, and at least it’s a digital option. 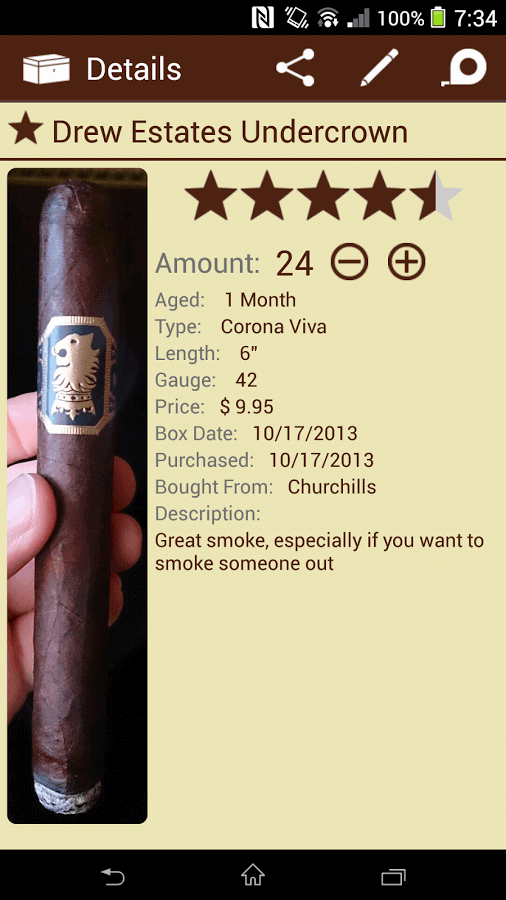 My Cigar Humidor is a simple app that allows users to keep track of their Cigars, with a simple photo and an interface that should suit those with a real humidor of their own. With fields such as when you bought it from and where, as well as how much it cost, My Cigar Humidor is a simple and easy-to-use app that makes keeping a track of your Cigars and smokes for future reference a real breeze. There’s a paid version available as well. 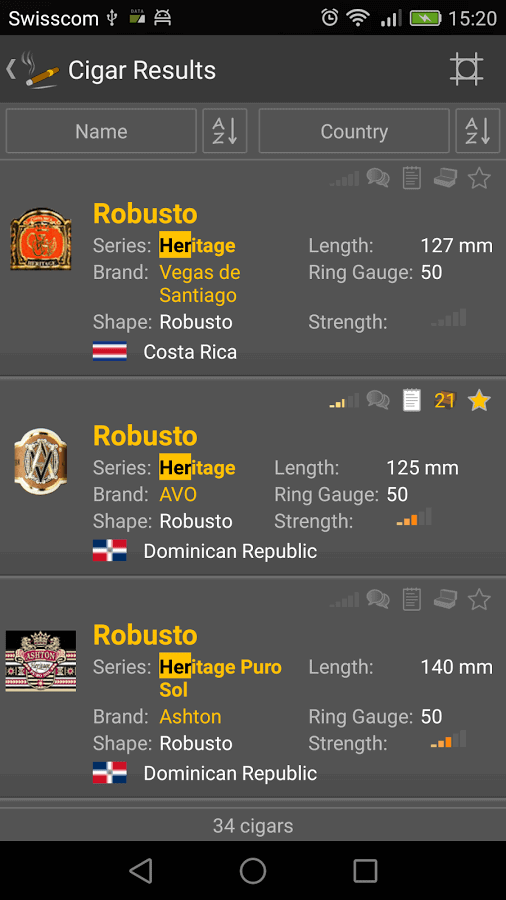 Aficionado is the Android app to end all Cigar databases, and has oodles of results in an ever-growing database. It allows smokers to search for a cigar using a number of different criteria far beyond the name and brand of the Cigar, and it also has a lot of information per Cigar, too. Users can see how others have rated a particular smoke, and there’s a lot that users can gleam from using Aficionado for even just a couple of minutes at a time. 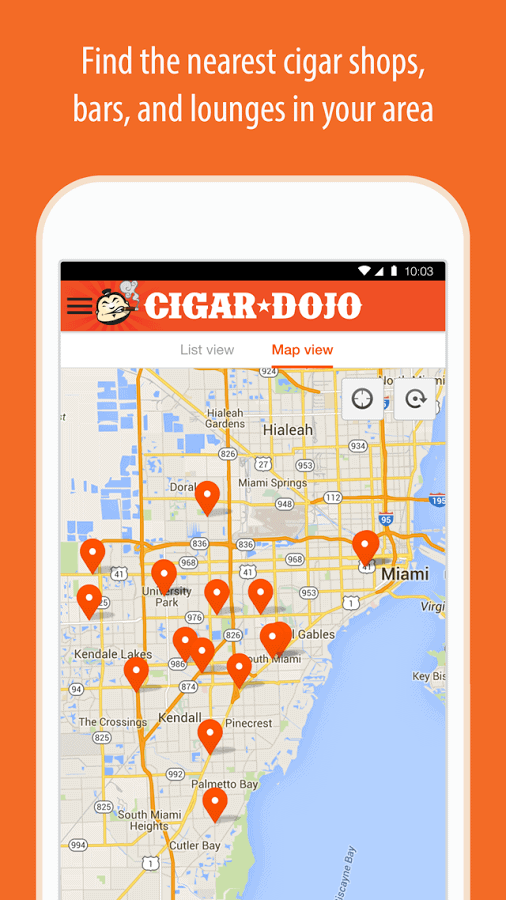 This a well-polished Android app that has a lot on offer, all the while delivering a fun and informative selection of content surrounding where to smoke and what to smoke. These options include being able to put two Cigars head-to-head and even earning points towards money off your next purchase with a participating store. It’s the sort of app that will appeal to a younger generation, while offering genuine value for those that are perhaps a little older.