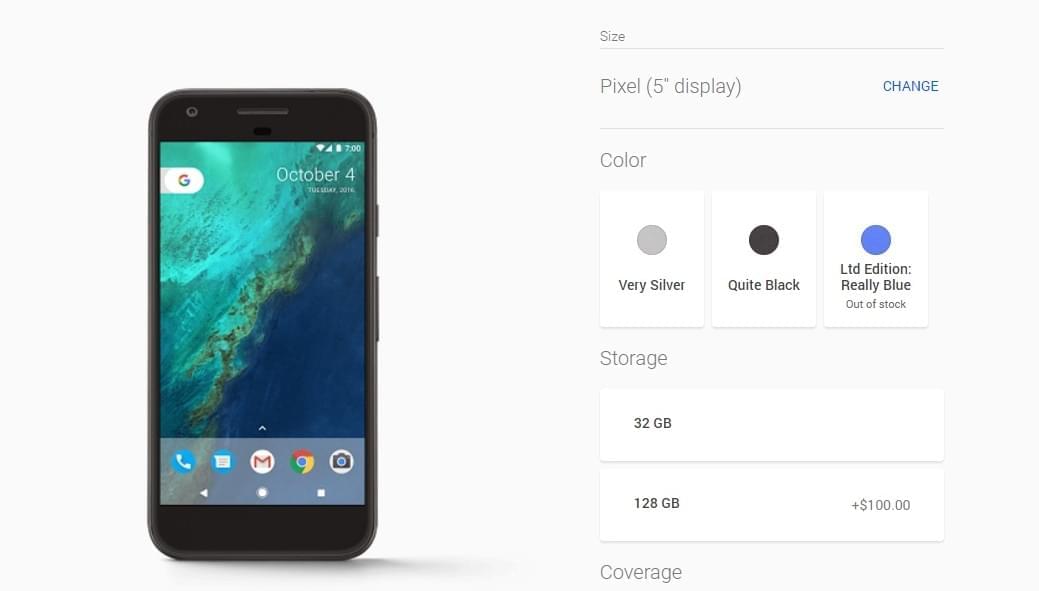 Earlier today Google finally took to the stage to host their widely-reported on October 4 event. As to be expected, the big headline announcement from the event was the introduction of two new smartphones, dubbed the Pixel and the Pixel XL. Both of which share many design traits as well as many internal specs. Although the Pixel XL is 'extra large' in a number of ways as it exceeds the Pixel in size (5.5-inches compared to 5-inches), on resolution (QHD compared to 1080p) and on battery capacity (3,450 mAh compared to 2,770 mAh). Besides these factors, most of the rest of the aspects are common to both smartphones.

Including the color options with both variants of the Pixel phone available in some rather obviously-named colors, 'Very Silver', 'Quite Black' and a limited edition 'Really Blue'. As part of today's announcement, Google also confirmed that the Pixel and the Pixel XL would be available to pre-order from today and by the looks of it, the pre-orders are already flying in and especially for the Really Blue model. As it currently stands, the Really Blue variant of the Pixel and the Pixel XL are both now sold out on the Google Store. Which is currently the only place you can pre-order the two smartphones from. It is unclear as to how long it will remain out of stock for, but right now both Really Blue models do seem to be sold out.

Of course, being a limited edition variant does naturally mean that stock of the Really Blue is likely to be lower compared to the non-limited edition versions. So whether this is temporary issue and more limited edition stock will be allocated in due course remains to be seen. Likewise, as this is a limited edition model the seemingly already sold out status of the blue model does not really provide any meaningful indication of how well the device is selling, as it is unclear as to how little (compared to the other colors) stock there was of the blue model to begin with. Either way, if you are planning on ordering either the Pixel or the Pixel XL then it looks like you will (for now) have to opt for either the Very Silver or Quite Black variants. That is, providing they both manage to remain in stock as well.

Advertisement
Pre-order the Google Pixel
Advertisement
Trusted By Millions
Independent, Expert Android News You Can Trust, Since 2010
Publishing More Android Than Anyone Else
29
Today
173
This Week
280
This Month
4264
This Year
105741
All Time
Advertisement