Planet Assault is an Android game that puts players in control of their own personal arsenal of space missiles and asks them to destroy enemy bases on planets. The game plays as a sort of artillery range simulator, where players need to choose different weapons and different trajectories in order to make sure they hit their target. Of course, Planet Assault is a game that takes place in space, and with that there are asteroid belts, smaller planets and other space debris to dodge. Players need to make sure that they choose the right sort of missile, as well as plan accordingly, as there are only so many weapons users get access to per level. There are three different game modes, including “the Journey” which is like a campaign mode, a survival mode which features procedurally generated levels as well as the artillery range mode, which allows players to hone their skills.

Players looking to blow stuff up can download Planet Assault from the Play Store for free. As Planet Assault is a free game, it shouldn’t come as much of a surprise that the game does feature some ads in order to make some money, as well as in-app purchases that allow players to purchase more missiles and such. 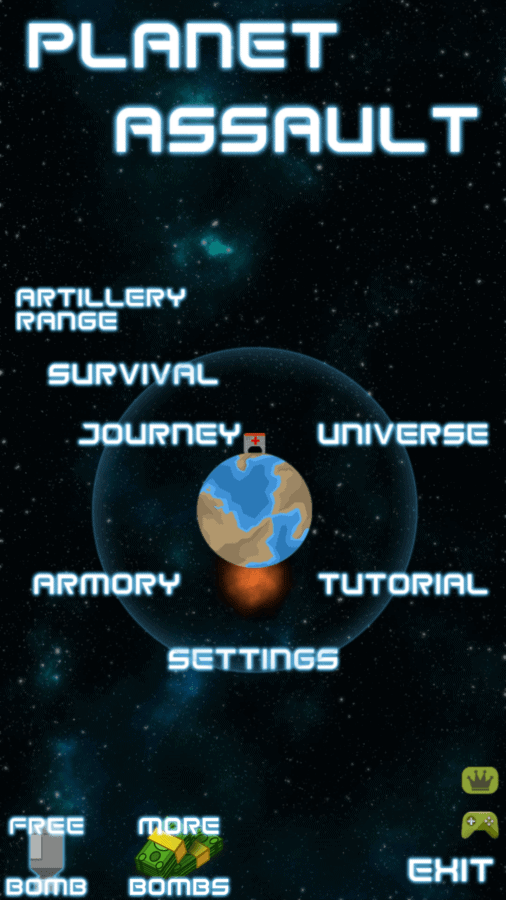 From the main menu – where not all of these options will be open straightaway – I’d recommend that players go ahead and play through the tutorial first, which does a good job of introducing players to the game and the overall gameplay. 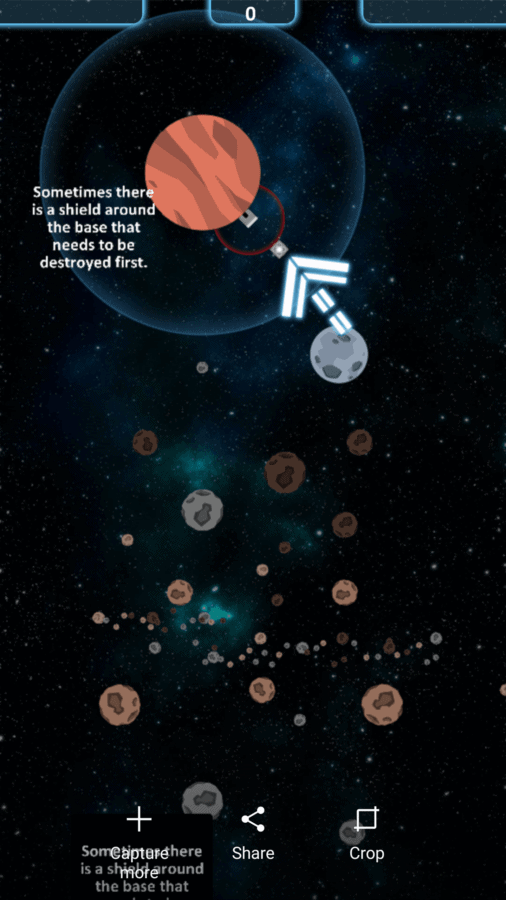 The overall premise of this is to make sure that you destroy the base on the planet featured in your current level. Of course, aiming for these bases seem pretty easy, especially as players get used to the different capabilities of the different missiles that users have access to, some of which sound pretty badass, indeed. 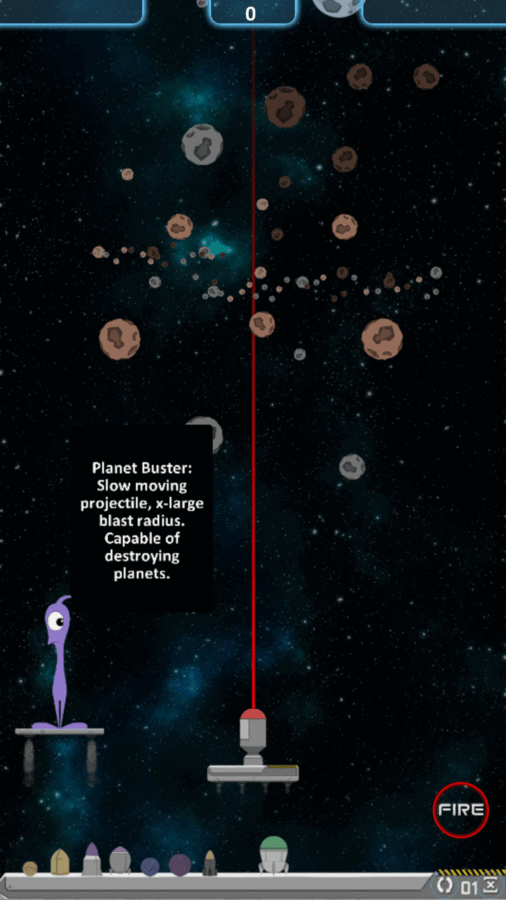 As we can see, there’s a lot of space debris, asteroids and smaller planets that we need to blow up before we can even get to the main target here. This is what makes Planet Assault a nice mix of strategy and patience. Players can move the red reticule to the left or right in order to adjust the overall aim. Watching a missile head towards destruction is pretty satisfying in its own right, too. 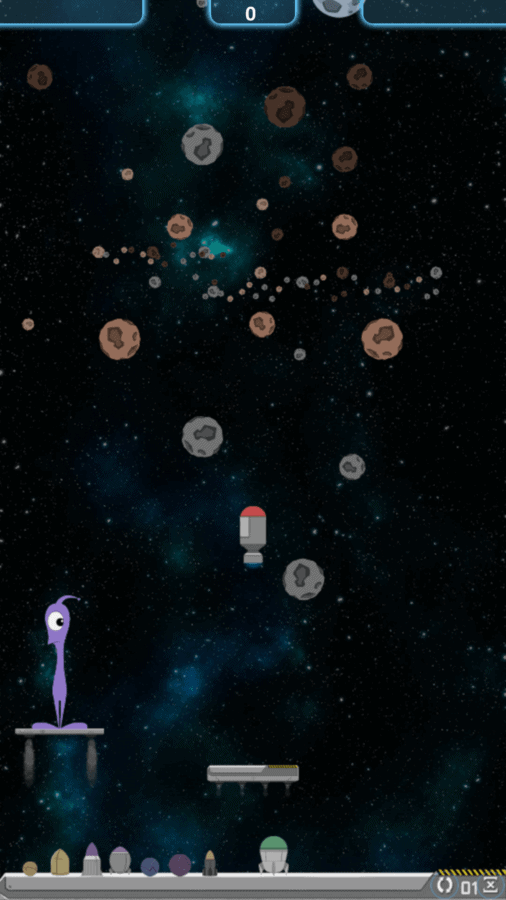 This is a decent strategy that I have here, as players can use the larger bombs to clear a path for the faster, more accurate bombs. There’s strength in numbers, and the more smaller planets and asteroids that you destroy, the stronger a chance you have at succeeding with your other missiles, fired later on. 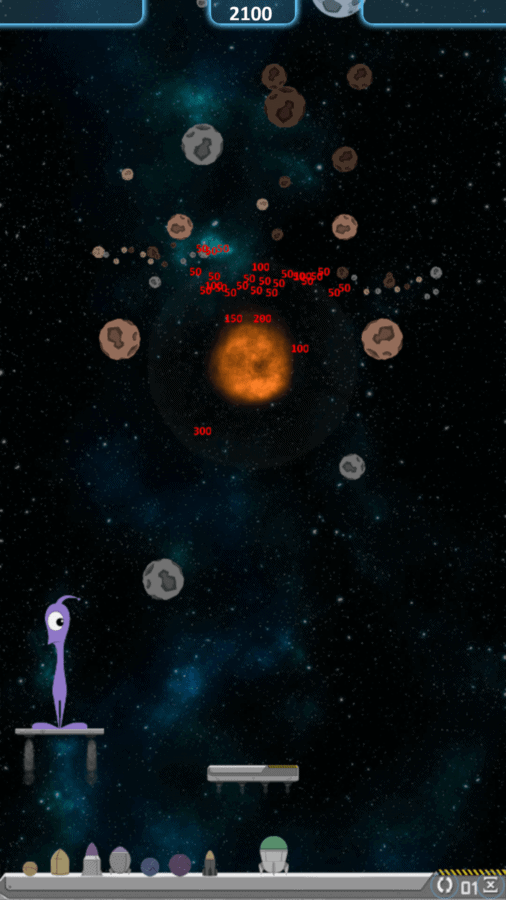 No matter which game mode you’re playing, you will always have access to your stock of missiles, but there will be times when you don’t have that much of a variety. Even so, it’s nice to be able to look at your other missiles and see which would be a good fit for your next move. 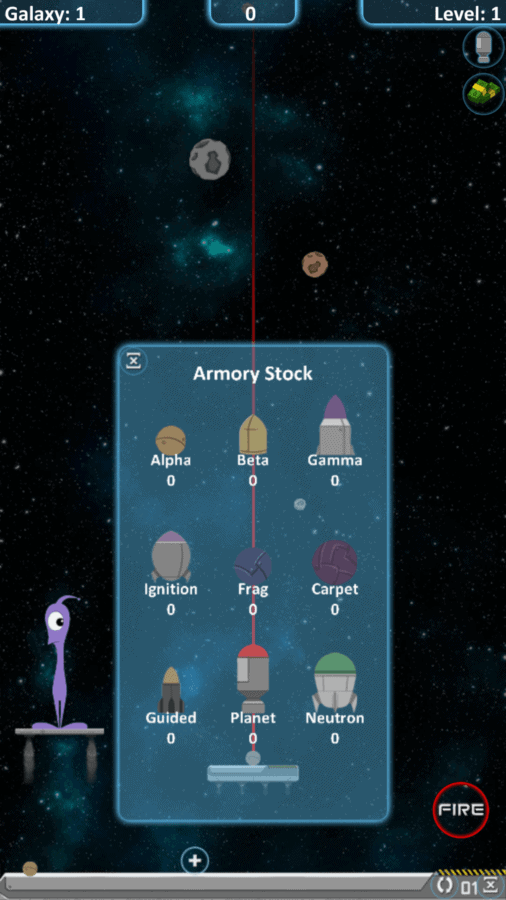 Speaking of game modes, Planet Assault comes with three different game modes, and will offer players different challenges. It’s nice to see a strategy game like this to include a survival mode, which in Planet Assault, keeps on throwing different levels at the player to tackle over and over again. 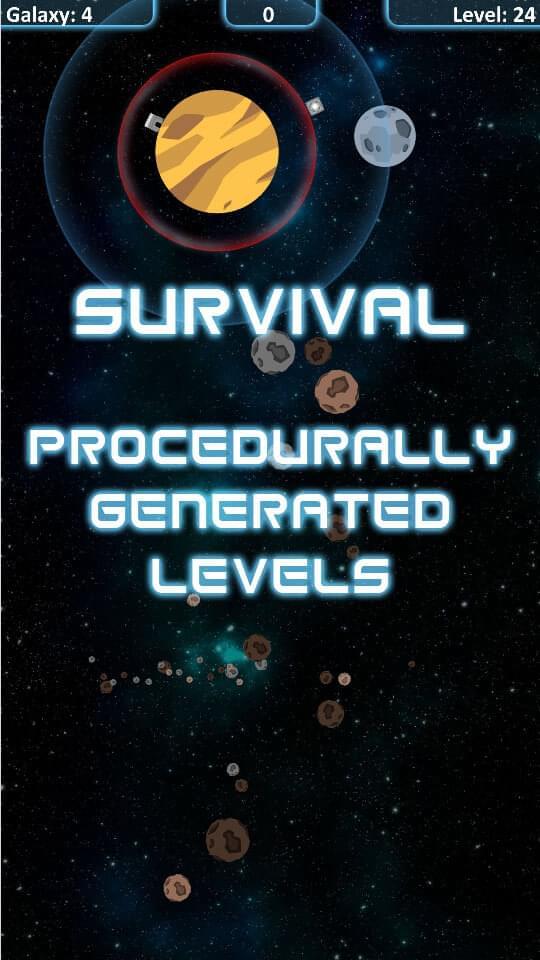 You never quite know what you’re going to be faced with when playing Survival mode, which is much of the fun, sometimes you might end up with a pretty simple level, with a simple way to the end goal in sight, such as this one: 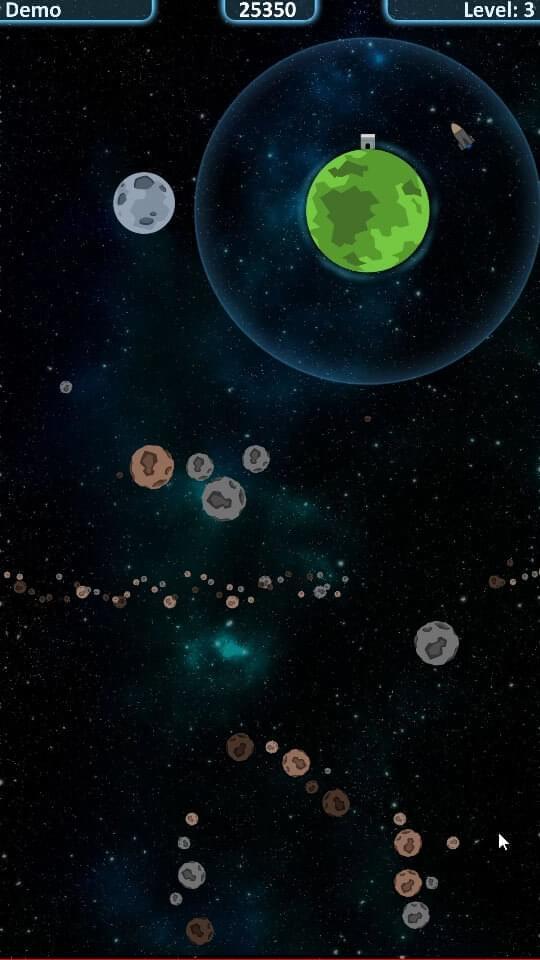 Other times, the game might have generated a whole universe of pain for you, with a shield to destroy, lots of obstacles and even a block in front of the planet in question. These can be a real pain, and the levels in the Journey mode do get steadily more difficult as time goes by as well. 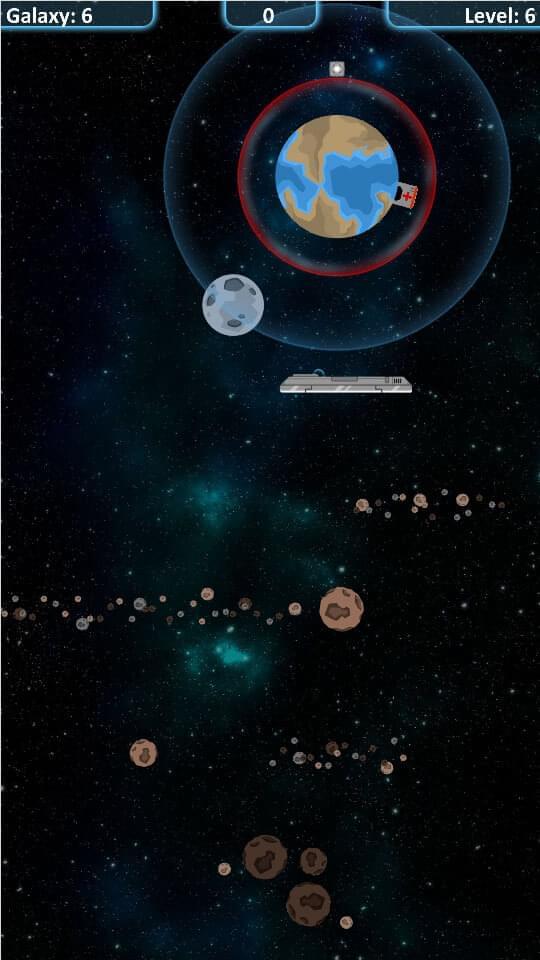 This is where it’s important to remember another piece of strategy; gravity. In Planet Assault, gravity is your friend, as you can use the gravitational pull of each planet in order to cheat the game make sure that you get to the target no matter how difficult the path. There is also the option to purchase different missiles as well, which will no doubt help bolster an already strong armory. 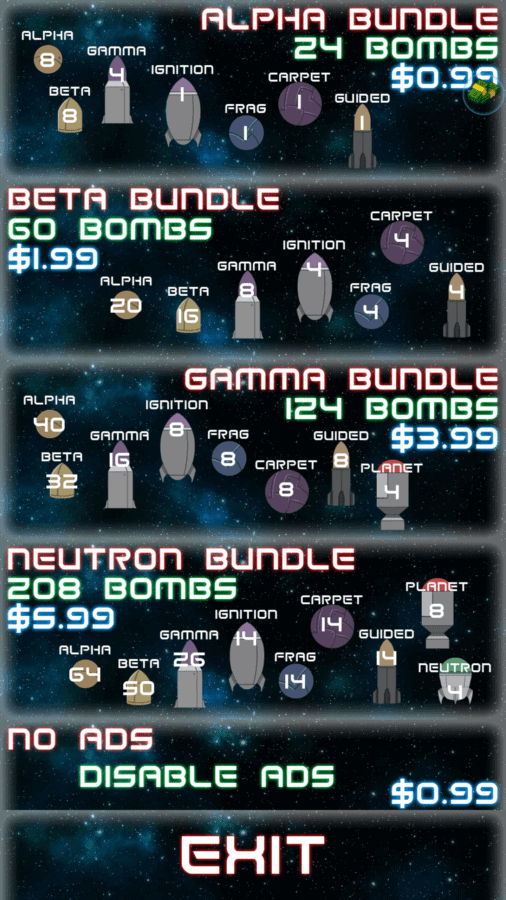 I think that there are a lot of players out there that will enjoy a fun game like this that asks players to use their brains as well as make informed decisions on where and what to do next. All-in-all, there’s a lot to enjoy about Planet Assault on the whole, but it does need a little work. For one thing, the overall presentation of the game feels a little drab, as the majority of planets as well as asteroids all looks the same from level-to-level and there aren’t any cool sound effects that are unique to each of the different missiles. This is of course a personal taste, and some users might not be bothered by the look and feel of Planet Assault, given that it’s a strategy game first and foremost. With that in mind, Planet Assault certainly does deliver on its overall promise of strategy as players need to make sure they plan accordingly, as well as make sure that they don’t run out of missiles and whatever else. It’s the sort of game that will appeal to fans of taking it slow, and it’s a great option for players that enjoy casual games, but want something that requires a little more brainpower and is a little more challenging. New features are constantly in the works for the game as well, such as Black Holes as well as some more difficult galaxies towards the upper levels. 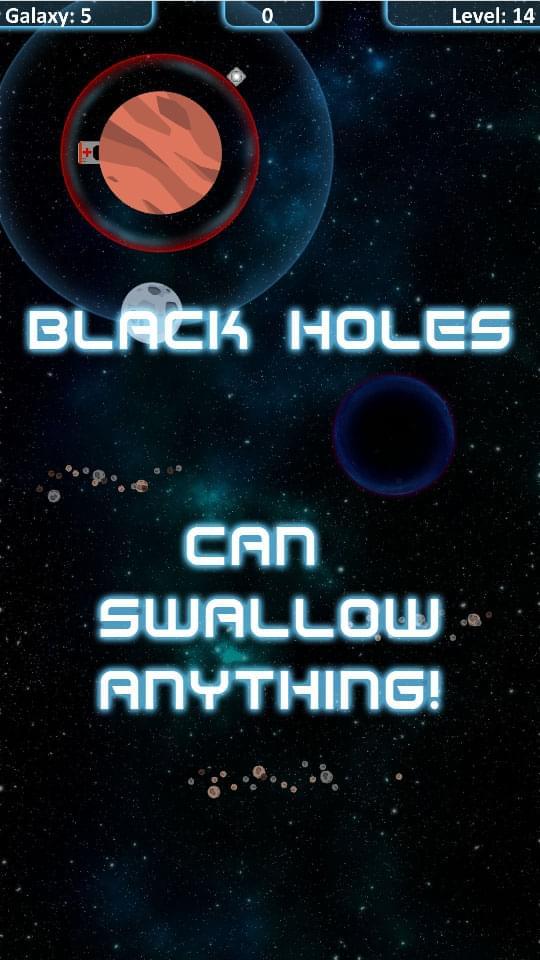 Overall, Plant Assault is a great streatgy game, and one that’s easily played on a smartphone or tablet. The aiming system is a little standard, and while there’s little in the way of extra pizzaz here, the game does look good and it plays well, which is all that matters. This sort of measured and careful gameplay won’t appeal to everyone, but it’s the sort of thing a lot of people will be interested in and it can definitely hook you if you take to it.